London Hotels: Behind The Curtain, Shoreditch 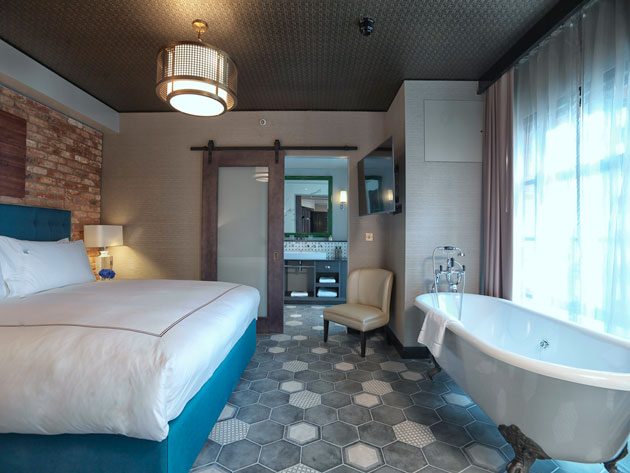 Across the pond, New York hotelier Michael Achenbaum, the brains behind the Gansevoort hotels (you’ll recognize the name from the company’s properties in New York City and Turks and Caicos islands), has opened The Curtain, a hotel/private members club, dining and live music venue in Shoreditch, in London’s east end – his first hotel in Europe.

The now-chic, but once edgy area is known for artists’ lofts, fashion culture and a burgeoning tech community, but its roots lie in Londoners’ traditional weekend pursuits: strolling the Columbia Road flower market, hunting for vintage finds down Brick Lane and noshing at Old Spitalfields Market, all just a walk away. New York industrial chic meets English eccentricity here. Exposed brick, warehouse-style windows and hardwood floors pair up with green tufted-leather couches and hot pink tartan details. The hotel and its 120 rooms, including five suites, has all the mod cons travellers have come to expect – 24 hour gym, spa treatment rooms, bedside Bluetooth-enabled speakers – but there’s more. The marble bathrooms, for example, come equipped with showers, above, that double as steam rooms. The idea of melting away the day’s stress, in the privacy of your own room, without having to book a massage or cart your bathing suit down to the gym, is most appealing. Visually, all the public and room spaces are a photography lover’s dream, particularly if you’re a music fan. Iconic images by equally iconic music lensman Mick Rock pepper the walls – along with original works by acclaimed street artist Banksy. “We spent almost 10 years seeking locations throughout London, with the last seven years specifically focused on the emerging East London area,” says Achenbaum, who has always been a champion of investing in up-and-coming neighbourhoods, such as the then-rough-around-the-edges Meatpacking district in Manhattan, when he first opened The Gansevoort there in 2004. “It’s in our DNA to create hotels in neighbourhoods that are not only ahead of the curve but also in areas that are growing. The Curtain is that vision come to life in Europe.” And, like his Gansevoort property on Park Avenue in NYC, he’s added rooftop/pool/hotspot, he calls Lido (above). Achenbaum has enlisted some serious global-goes-Big-Apple culinary cool with Ethiopian-born, Swedish-raised super chef Marcus Samuelsson of Harlem’s famed Red Rooster, with his first London outpost, seen above. “To me, Shoreditch has a mystique to it,” Samuelsson tells me, while I’m taking a bite of his famous cornbread. “…and I like that you get to see British high and low here. The food scene is booming, the music scene is great and artists are everywhere. It reminds me of Harlem – that, and how it’s constantly changing.”

Samuelsson is also in charge of the lobby’s Tienda Roosteria, a lively hangout bar, taco and tequila spot where, as a solo traveller, I still felt like part of the local scene. But the best part? Personal, friendly service and nary a whiff of hipster irony in the the whole place.

And, speaking of service, we asked Thomas Ryan, The Curtain’s food and beverage director, to give us his favourite cheap and cheerful things to do in Shoreditch.

Broadway Market on a Saturday – costs nothing to go there, but it’s unmissable on a sunny Saturday – full of good vibes. Hard not to spend money (it’s all so tasty!) but doable.

The bar at The Clove Club. Order a martini and some fried chicken at the bar, rather than going for the swanky set menu. All the atmosphere, without the price tag.

Bad Sports for tequila and tacos – super good value and loads of fun. One of our favourite spots in East London.

Click through for the recipe for Marcus Samuelsson’s worth travelling to New York or London cornbread, or go to www.everythingzoomer.com/recipe-cornbread