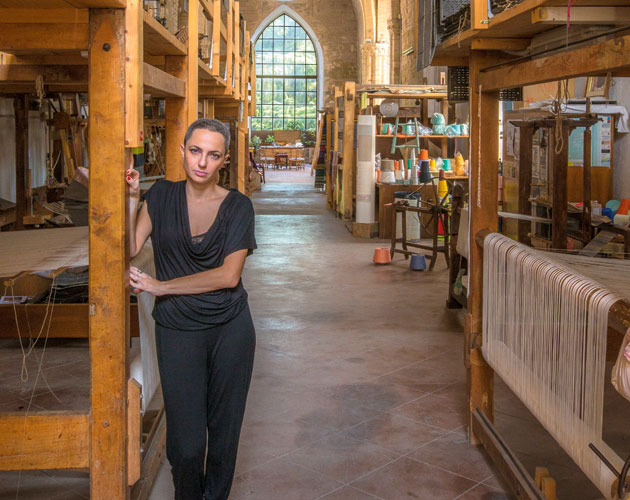 Zoomer’s travel editor Vivian Vassos goes beyond the picturesque views of Perugia, Italy as she explores the Laboratorio Giuditta Brozzetti, a traditional hand-weaving workshop where Perugia cloth has been made for generations.

Her feet move with precision, pumping the pedals like an organist. Her ankle boots – four-inch heels – hint at punk. Her blood-red lips give way to a smile more intense. Her cropped hair reveals a honed bone structure. Yet it’s her hands that mesmerize. They fly over, under, in and about hundreds of multi-hued threads, strung across ancient looms that her mother and her mother and her mother before her used to weave their textile magic.

We’re in Perugia, in Marta’s workshop, at the Laboratorio Giuditta Brozzetti in the Church of San Francesco delle Donne. The loom has a time-honoured patina, worn where her great-grandmother, the founder Giuditta Brozzetti, laid her own deft hands. This is the origin of the Perugia tablecloth – it’s said the table in Leonardo da Vinci’s The Last Supper was adorned with a Perugia cloth – and Marta’s studio is one of the few remaining traditional hand-weaving workshops in Italy. It was Giuditta’s mission to sustain the art and the patterns native to Umbria.

The United Nations World Tourism Organization (UNWTO) deemed 2017 the international year of sustainable tourism; it defined it as the collective effort to sustain natural heritage and cultural values as a way to better celebrate diversity.

But it’s also a way of experiencing a place in a much more personal way. “It’s going behind the scenes,” says TreadRight Foundation’s sustainability ambassador Céline Cousteau, the granddaughter of the ocean explorer Jacques Cousteau, and a filmmaker and humanitarian. The not-for-profit TreadRight, as part of The Travel Corporation (TTC), supports the UNWTO initiative by aiding cultural heritage treasures like Marta through awareness and grants from our tourism dollars. (The guided itinerary we’re experiencing was created by TTC’s Trafalgar.)

“Sustainable is one label,” says Cousteau. “But meaning, that’s something that we’re always seeking, and sustainability has meaning. If we have the opportunity to explore new cultures, new places, new ways of thinking,” Cousteau says, “I think that changes who we are.” —VV

A version of this article appeared in the October 2017 issue with the headline, “It Takes a (Global) Village,” p. 26.