For St. Patrick’s Day and Beyond: A Taste of Dublin 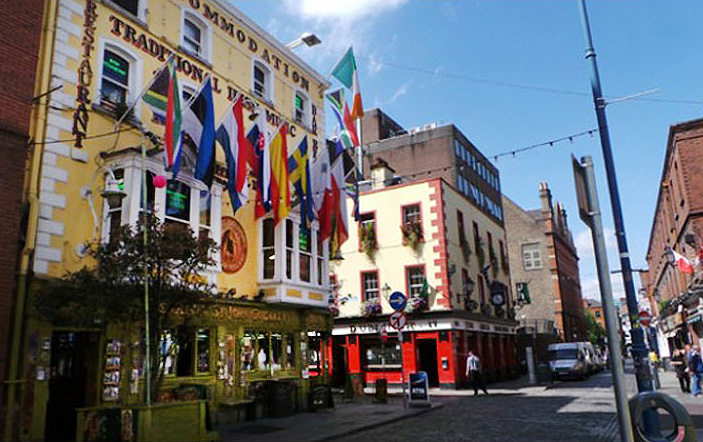 Here, a guided tour of the Emerald Isle’s capital city.

“Four million Canadians go to Europe every year,” say the experts at Air Canada Vacations (ACV). We’re in Europe as we speak, in Dublin, Ireland, and we’re talking about busting the myth that leisure airlines can only do the fly and fry budget holiday.

On the Emerald Isle, I get a taste of what the company can offer its guests: it’s eager to share a view of Dublin (above), the capital of the Republic. It’s a view that travellers can also get when they book through the company, along with air, hotels, day tours, guides and skip-the-lines at attractions (a pint of Guinness, right from the brewery Storehouse, anyone?), as part of a decently priced package deal. The beauty of Dublin, of Ireland in general, is how down to earth and friendly the people are, yet how there’s an almost palpable fairy-tale magic here as well, a mystical sort of spirit that’s not so surprising, considering how we still associate Ireland with pots of gold at the end of rainbows, sprite-like leprechauns and, well, luck. It’s also a place where music plays a huge role in how history and stories are passed down, generation to generation.

We’re led us through Temple Bar, one of Dublin’s oldest neighbourhoods and coolest – U2’s Bono has his hotel, The Clarence, here – like a modern day St. Patrick on a pilgrimage for the best in local music and general conviviality. Yes, we’re here courtesy of Air Canada Vacations. Staying in a 5-star hotel. Yes, I said 5-star. Sure, you can fly to Cuba and the beach, but you can also stay at The Shelbourne, one of Dublin’s best addresses, and still reap the benefits of a company that purchases in bulk, for a valuable buying power that’s passed on to the customer. Fancy a hotel at the top of the Spanish Steps in Rome. Check. Looking for securing a berth on the next Transatlantic crossing of Cunard’s Queen Mary II? Check. Angling for front of the line access to a Game of Thrones tour north of Dublin? Check. “France, the UK and Ireland are all very popular,” says ACV, “and we can offer more competitive pricing because we fly with Rouge [Air Canada’s leisure-priced airline]. This gives us more than 66 connector hubs.” And AC Vacations has more than 50 hotels in Dublin alone, allowing for all price points and budgets. The company also sells tours to China and Thailand.

You can also use your Aeroplan points to book with AC Vacations, and earn points when you book. And, not all destinations are Rouge routes. The vacation company can sell pretty much everywhere Air Canada flies. So, next time you are in Sydney, and might want a city tour, you can find one with AC Vacations. Other tour companies are also doing the same: Porter Airlines now has a Porter Escapes arm, while Transat Holidays Discoveries Collection takes its guests to Africa, Vietnam and Thailand.

And it’s not just air and hotel, but other bells and whistles, like tours, excursions, car hire, Cirque du Soleil tickets. And most importantly, the destinations are vetted. There’s a human being at the end of the line. Special needs passengers are booked in hotels that can accommodate their unique needs, for example. And if there’s a hurricane, and you’ve booked with AC Vacations, they will sort it out. They have access to planes for emergency causes. We’re here in Dublin during the city’s TradFest – the annual traditional music festival that takes place at the end of January – where you can see 10-year-olds going at the Bodhrán (Irish Drum) like Whiplash‘s Miles Teller, but with one drumstick, and hear Irish icons such as The Dubliners troubadour John Sheahan – who, at 76, still takes the TradFest stage at Dublin Castle with his fiddle – upstage the boys on guitar half his age.

If the music is the roots of storytelling for the Irish people, the surrounding Georgian architecture and seminal historic sights of interest are their touchstone. An expert’s view, in this case, Air Canada Vacations, provides a deeper look, and they’ve set us up with local Josephine O’Keefe as our guide. We arrive at Merrion Square, where a bust of political revolutionist Michael Collins greets us at the entrance, engaging us to pay respects; of fighting for one’s rights, no matter what the cost. A short stroll reveals a life-size statue of the author and wit Oscar Wilde, in cheeky repose, facing what was his house, just across the street. Later in the day, a tour through the city’s Glasnevin cemetery and museum reveals Europe’s greatest – and eerily beautiful – collection of stone Celtic crosses, and acts as the final resting place for more than 1.5 million people. They’re grave markers, of course, but row on row, these sentinels stand as a testament to belief, strife and the deep-seated ethics of Irish freedom fighters such as Daniel O’Connell. Known as the Liberator, O’Connell, in the early part of the 18th century, was at the fore of Catholic emancipation and the right for Catholics to run for office and sit in Parliament. He won a seat in the British House of Commons and, in 1829, after many struggles and help from Brit politicos including the Duke of Wellington, managed to influence George IV to allow Catholics and, eventually, the emancipation of British Jews to take the oath of office, without reference to religion. Touch his coffin – his body is interred in a tomb on the Glasnevin grounds – and it’s said to bring a bit of that Irish luck. And, then, there’s Trinity College. Founded by Elizabeth I in 1592, Ireland’s oldest university sprawls over 40 acres, right in the centre of the city. This place, echoing with the footsteps of scholars – James Joyce and Samuel Beckett trod these cobbles – gives one pause. The stone buildings sit behind a fortress-like wall, and are placed in such a way to allow for plazas, natural meeting places and gardens where you might run into a fellow student, or come across an impromptu cricket match on the green on an unusually sunny day in Dublin. Inside, in the Long Hall, the library is home to more than 300,000 books, some as old as the building itself, while in the Treasury, is the Book of Kells. It almost defies description. It is a 9th century illuminated manuscript; illuminated in such a way that its painted golden hues, outlined in almost a 3-dimensional manner, reveals an otherworldly, divine text that seems to glow, right off the page. Magic, indeed. If you go: Why a guided holiday might make sense for you: air, hotels (in Dublin, you can opt for the five-star Shelbourne Hotel with Air Canada Vacations), day tours, guides who speak the language and skip-the-lines at attractions (a pint of Guinness at the brewery Storehouse, was a highlight), as part of a decently priced package deal. www.aircanadavacations.com; www.ireland.com/en-ca/