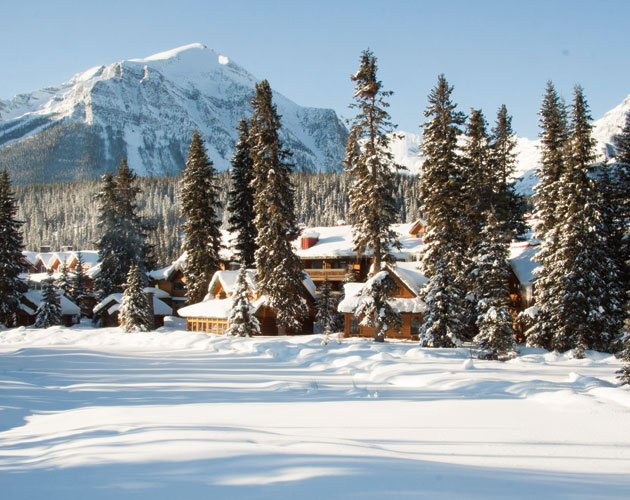 I’m standing on a precipice, watching a woman wearing a white furry hat that makes her look like a mountain goat. Yes, I said mountain goat. The woman, Nadine, is busy explaining to us in her own inimitable manner (she’ll pull out gloves that resemble the hooves of the goats next) the incredible winter survival tactics of animals in the Lake Louise, Alta., area. She’s a naturalist and local favourite, working the Rockies since 1991 with her partner Joel.

That precipice? The view: a turquoise lake, snow-capped jagged peaks forming a deep-V just off centre. Many of us are familiar with the picture-postcard perfection that is Lake Louise. But perhaps this is also the genesis of the phrase “doesn’t do it justice” as once you see it in all its real-life glory, you’ll truly get the meaning.

But Lake Louise is also a town, a home for winter outdoor enthusiasts (and summer hikers) and within it, the Post Hotel & Spa. Alpine lodge in its spirit, rustic chic in its look, the Tyrolean influence comes by way of Swiss expats André and George Schwarz. What drew the brothers to Lake Louise, like so many others, was the skiing. They came here in the early ’70s to run the local ski school and remained only to become local legends in the sport. André is credited for modernizing ski technique in Canada in the 1980s, with a technique known as movement and motion, which according to the Canadian Ski Instructors’ Alliance manual, advocates an overall goal of being able to follow a chosen trajectory at a chosen speed with the least possible resistance and muscular effort. To do this, the skier must move constantly to maintain balance and control direction change. (André also taught Dustin Hoffman a thing or two on the slopes, when Hoffman was in Alberta making Little Big Man.)

Meanwhile, George was all about the après-ski and, with it, the will to operate a hotel of his own, which culminated in the purchase of the property on the bank of the Pipestone River in 1978. His penchant for fine wine – he’s been collecting for the past 25 years and now has a cellar that houses more than 25,000 bottles, including a few from Canada – has gained the hotel a Grand award from Wine Spectator every year since 2002. A rare gem, as there are only four restaurants in all of Canada with that designation.

With wine follows food, and the hotel quickly gained a reputation for an outstanding restaurant – it’s on Condé Nast Traveler’s Gold List for best food in the Americas – but not necessarily the best place to spend the night. So the Schwarz brothers revamped the original building, adding spacious rooms, some with loft bedrooms, big fireplaces and quiet lounging spaces, without losing the Swiss-meets-Rockies flavour that they had perfected in the dining room. The Temple Mountain spa soon followed, and the resort experience was clinched. And they work with the local ski hills and naturalists like Nadine to provide an all-encompassing experience of the wonders of Banff National Park, where the lodge is located.

The brothers treat each guest as if they’re in their home, stopping by each table, greeting people at the door; we even spotted George taking a turn in the kitchen at brunch. And their hard work has paid off. This year, the readers of Travel+Leisure magazine ranked them Canada’s top hotel.

Go and, if you’re lucky, you might have George open a bottle of his favourite vintage while manning the bar or even get to ski with André – or just score some ski tips from the legend himself. 1-800-661-1586; www.posthotel.com