Word of Mouth: Kristin Karst, AmaWaterways’ Co-owner On Travel Trends and the Future of River Cruising 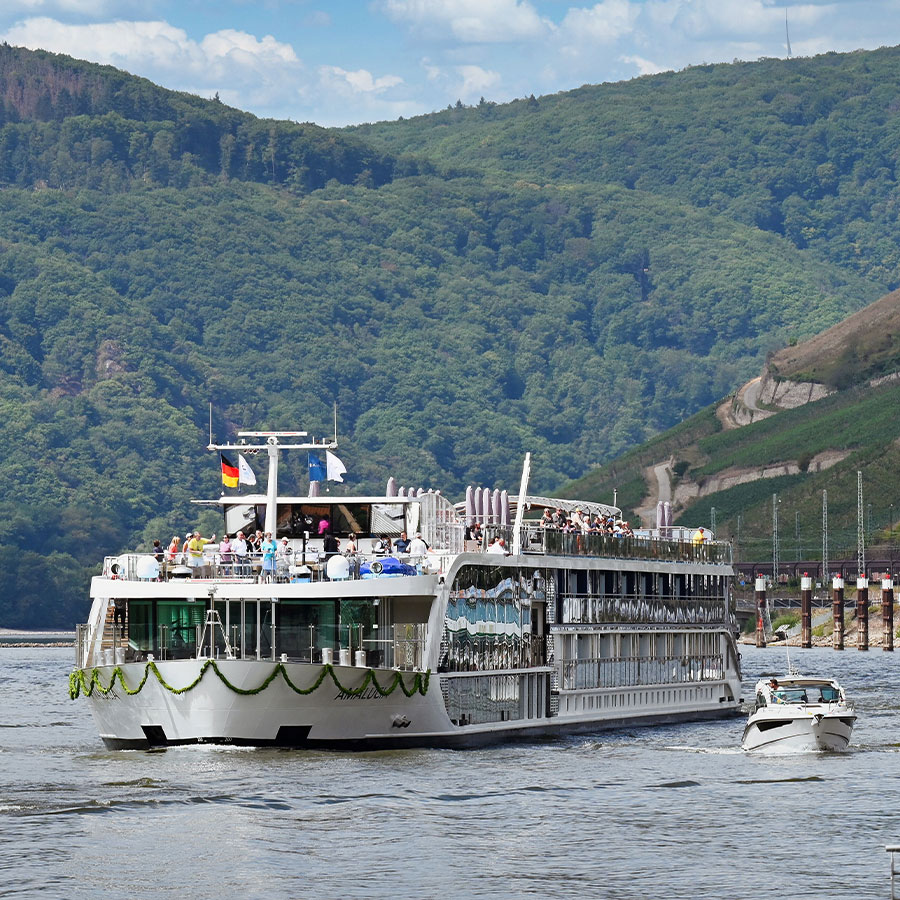 This summer, I had the privilege of joining AmaWaterway’s co-founder, Kristin Karst, on the AmaLucia’s christening voyage along the Rhine River, from Amsterdam, through Germany and ending in Basel. Although the ship had been in the water a year prior, the christening, which also coincided with the company’s 20th anniversary this year, was postponed due to the pandemic.

In a lovely, understated ceremony halfway through the voyage in the quaint German town of Rudesheim am Rhein, they finally, officially, gave the ship her name. Fitting, as the German-born Karst and her Ama co-founder and husband Rudi Schreiner are exactly that — warm, understated and lovely. Most passengers weren’t even aware that this particular trip was a little extra special, and were delighted to discover at the welcome-aboard cocktail that they were riding with the company owners and invited to the party.

Karst, who was named to Inc.’s “Female Founders 100” list in 2020, is the recipient of the Travel Vanguard Award from AFAR Media, as well as the Lifetime Achievement Award from the trade publication Travel Weekly. Schreiner, who is from Austria, is more than just an owner. He’s known in travel industry circles as the godfather of river cruising, having been part of, or consulted with, practically every river cruise company in business today. He got his start as a journalist when, on assignment in South America, he crafted his own “river ship” that would take him up and down the Amazon River.

“I see it as a beautiful journey, like we started yesterday,” Karst told me, of celebrating two decades. “But then I look, not just at the 26 ships later that we have built, but also at all the memories we have created for our guests.” And the families, she adds, “when they are coming together again, away from the cell phones, the laptop and to see them spending quality time together, introducing travel to the children, that next generation will continue to travel because this experience opened their mind.”

That evening, guests on AmaLucia were treated to a classical concert by a German trio. “We bring the locals in, it has to be authentic; we form this community and we do it on every cruise.” Music is an important theme for Ama, as most of the ships have musical or lyrical sounding names, such as AmaViola or AmaCello; on board the AmaLucia, the three cabin decks are called Violin, Cello and Piano, for example. “And being from this area,” she adds, “we are also very proud that we want to share our own heritage.”

Where to next for Karst? “I am actually very excited about Egypt. We were in Egypt long before the revolution, and we have our own purpose-built Nile ships [the second, AmaLilia, will make its debut in 2024] rather than leasing other companies’ ships. It is certainly one of the countries where it’s a male crew on board, but as a woman, it was important that many of our Egyptologists that we work with are females. And they are very, very strong.”

It’s a fascinating country, she says, and a very colourful country. “Of course we all know about the history, but the Nile River is one of those rivers that everyone should have on their bucket list.” For Schreiner, it’s all about what’s new and next, with local culture mixed with wildlife sightings as his motivator. He’s currently at work on a new ship for the Magdalena River in Colombia for 2024.

Read on for more of my conversation with Karst and Schreiner.

Vivian Vassos: I overheard you talking about the godparents of the AmaLucia, who are actually a teenager and a tween; you mentioned that having the kids as godparents was sort of a tradition from the beginning.

Kristin Karst: I think about kids, they all have a curiosity about life, about travel and that’s what all our kids have. My daughter [Isabel] and Rudi’s daughter [Julie] were the godparents of the AmaLegro in 2007.

VV: You’ve also gone beyond family. I understand that the actor Sharon Stone christened the AmaVida in 2013.

KK: And Samantha Brown, in 2019, she christened the AmaMagna. And she won an Emmy award the same year for her show Places to Love [for PBS].

VV: We’ve talked about how important women are in the industry. And 20 years later, you are still one of the few female top river cruise industry leaders. Do you just keep sharpening your elbows?

KK: Sort of, but no. Because it’s very important at the time in our life where we become the role model for the next ones and to teach them too. I moved to the United States 23 years ago. I come with an accent, right? But I never felt that I had to change my accent. Some might say, ‘People may not understand what you are saying or so you come from a different part of the world,’ but I always found this as a plus. I’m curious about women coming from different continents. I want to get to know them because they all bring something interesting, additional to the table. So in our company, we encourage, we are very inclusive. We have women in leadership positions, and so we have different key positions, women and men, it’s about 50-50, the right balance.

VV: Are you seeing more solo travel? I’ve also noticed how inclusive your ship is, for those with mobility needs as well as the LGBTQ traveller.

KK: It’s a very safe way to travel, to be part of a community that will include them immediately, but in a nice way, right? The first night, usually, we get the solo travellers together and they sit with an officer. So they get to know each other, but obviously we cannot assume they all want this. We respect if somebody comes and just wants their own privacy.

VV: What are your reasons to travel?

KK: It’s the personal factor. With the ones that we know, and to get to know new people. I think that is the part we never talk about, but for a river cruise, even to sit down at dinner and get to know so many people, and everyone shares their story, that’s such an enrichment. And then it doesn’t really matter where you are in the world.

Rudi Schreiner: I always enjoyed new cultures, new adventures. For my 65th birthday, my goal was to see the gorillas in Rwanda. So we went the next year. And now we include that in our program [in Africa]. We did in 2020. When we went, we also flew from Austria straight to Senegal and we were on a cruise on the Gambia River in Gambia through to Senegal. Afterwards, I wanted to explore more, but I was limited to a few small countries. Senegal, Gambia, Ivory Coast, Ghana. And I think we were pretty much the only white people in some, most of the places.

VV: And how was that?

RS: I wouldn’t say it was scary. I mean, there were some areas where you were like, okay, but I absolutely enjoy this kind of stuff. I had for many years, this one bucket list thing — that I would go to Cameroon. For six months or so, and spend time there. I was always fascinated by Cameroon when I studied architecture and anthropology. And African art is always fascinating.

VV: Both of you appreciate Africa.

RS: We got married in 2011 and Kristin wanted to go there on safari for the honeymoon. She didn’t want to have anything to do with a river cruise ship. So we started planning. And I told her, ‘I found this little ship [in Botswana], Zambesi Queen on the Chobi River, can we go for a few days?’ No. But I kept asking and found a weak moment where Kristin said, ‘Okay, let’s do it.’ So, we came on the Zambezi Queen, and the owner was also there. The architect was also there. I mean, by accident, kind of. And after the two days and nights we spent there, Kristin said, ‘We have to incorporate this into a program.’

VV: You’re working on a new ship in Colombia, another place that, even just a few years ago, people may have been a bit hesitant about.

RS: It’s a very charming, welcoming group of people in Colombia. Extremely warm, lots to see, lots of culture. Cartagena is one of the most beautiful cities. And on the Magdalena River, we are planning some of the stops to be more active. Water sports, kayaking, fishing and seeing wildlife that is very different from Africa’s. But we also have to be respectful of these areas, UNESCO World Heritage sites, which are home to unique communities.

VV: Do you look for more partnerships with women? So when you take people to a restaurant, for example, maybe it’s a family business that’s run by ‘mama’?

KK: For instance, our lower Danube program, where we go to Bulgaria, the house is run by ‘mama’ and she’s cooking banitsa for us. It’s this type of dessert, like a strudel. She cooks and, of course, everyone participates. Then we eat together, and we just have a wonderful time. And I also think of our wine hosts with the 70 different wine experiences cruises. We have quite a few women-owned wineries.

VV: Cheers to that.

This Q&A has been edited and condensed

AmaWaterways’ AmaLucia at a Glance

Set Sail: 2019, along the Rhine, from Amsterdam, Netherlands, through Germany and final stop, Basel, Switzerland

The Cabins: 78 staterooms, range from 310 sq ft to 160 sq ft. Lots of light and space; featuring what the company calls twin balconies — and indoor sitting area with a french door and an outdoor balcony. Bathrooms are spacious, and the AmaLucia also does the Adventures by Disney sailings, so some rooms come with a lounge chair that converts to a single bed.

The Design: A pool on the sundeck; a walking track that allows views of the shore and all the storied castles along the way while working out; elevator; a small gym; the bar and lounge also features a dance floor with a nightly DJ or live entertainment.

The Food: Ama has gone completely a la carte, eliminating the buffet, except a pastry display as part of the breakfast offering. Shreiner was happy to do it; he says it was sometimes difficult to manage the waste that a buffet can often create. The ship features the intimate Chef’s Table, where you can reserve dinner on one night of your cruise, for a chef’s tasting menu, with wine pairings. The main restaurant highlights local ingredients at dinner and regional dishes are incorporated into the lunch menu; wine, beer and soft drinks at meals. Afternoon tea is also served in the lounge.

The Other Stuff: AmaWaterways hosts wine-themed cruises as well as golf-themed cruises. New for 2023, the company will introduce the Seven River Journeys itineraries through Europe, which will have guests taking the longest river cruise on offer. Akin to a round-the-world cruise, the program traverses seven rivers and 14 countries.

Cruising Is Back on the Horizon! 10 Dream Cruises to Satisfy Your Wanderlust