Kevin Kline: On Playing a Boomer in MY OLD LADY 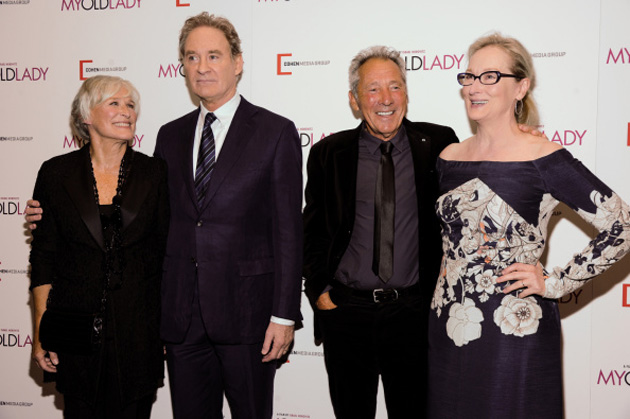 When prolific playwright Israel Horovitz decided that his valentine to Paris, My Old Lady, was meant to be a movie rather than another play “I went to Kevin first of all,” he told Zoomer last month.

That was the despite the fact that Kevin Kline is famously known as Kevin Decline, for all the roles he’s turned down.

“The two least flattering things actors have ever said to me were said by Kevin and Maggie when they took the film.

“Maggie said, ‘Would you like to know why of all the scripts I’m given I chose your film? Because I don’t have to die in the end.’

“And Kevin told me he took the film because it was his last chance to get the girl.”

“I was joking when I said that,” said the 66-year old actor, sitting next to Horovitz at the table.

“But as one ages, there are fewer and fewer roles when you get the girl in the end. Usually, you’re the professor…”

“And it’s your son who gets the girl,” interrupted Horovitz, 75.

Kline came to the attention of Toronto movie goers in 1983 when The Big Chill won the People’s Choice Award at TIFF.

It was the year after his breakthrough role as Nathan in Sophie’s Choice and though he indeed may have declined many job offers, he’s also made some memorable movies over the last 30 odd years: Silverado, A Fish Called Wanda, Soapdish, Dave.

In fact, Kline has appeared in a movie, stage production or TV series almost every year since Sophie’s Choice.

The three, though unrelated, might as well be a Boomer trilogy.

And Kline, 66, has been perfectly positioned to reflect the Boomer on screen through the decades.

But the character he plays in My Old Lady, 57-year old Matthias Gold, is, he said, “unusual. I guess he’s a baby boomer, whatever that is. I guess it just has to do with the year you were born.

But his character more than most examines life. He’s never reconciled himself to the damage done during childhood by life, by genetics, by his parents, but he retains his sense of humour and has enough insight and intelligence to be ultimately, potentially redeemable.”

He adds, “I don’t know many boomers who are that contemptuous or self-lacerating.”

Matthias is an American who’s come to Paris to claim a valuable apartment he’s inherited from his estranged, wealthy, divorced and re-married father. It’s all that his father has left him and there’s a catch: he must wait until the 90-year old lady who lives there with her middle-aged daughter dies. And until she does, he’s required by French law to pay her a large monthly sum. Only then will he be able to throw the daughter out and sell the place for a fortune. Meanwhile, Matthias is broke, miserable and melancholy. But Paris works its magic and the movie, a bittersweet romantic comedy for boomers, in the end celebrates life and love.

“It’s about more than just damaged people,” Kline said. “There’s a lot going on. It’s kind of a coming of age movie, it’s about childhood and about growing up, it seems to me. There’s something very true, very real in the character. All the characters are something people could recognize.”

Horovitz continued, “We all know people who are in the their 50s and 60s who are still complaining about their childhood. And part of us says, ‘Get over it. But you can’t get over it. It’s there. It’s sustained. It’s your share, it’s what you got, what you’re dealt.”

“Life,” says Kline, “is a card game” — echoing that Boomer theme that the Stones put to music and that defined The Big Chill: “You Can’t Always Get What You Want.”