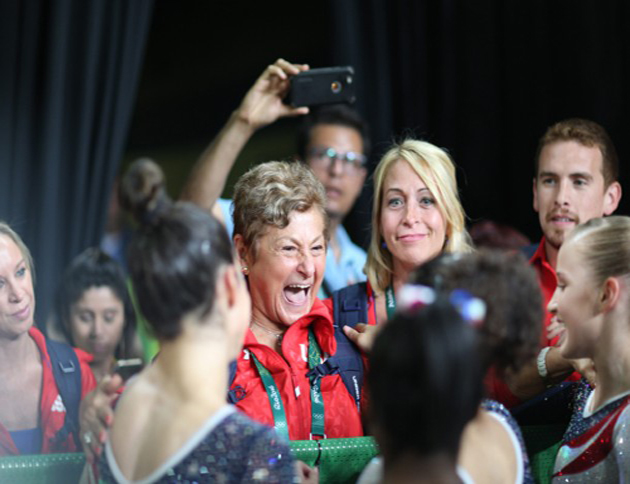 It’s a long way from the city of Cluj in Transylvania to a 2,000-acre ranch in Huntsville, Texas but that’s not the most remarkable part of Martha Karolyi’s amazing journey.

Together with her husband, Bela, who retired 15 years ago, the Karolyi couple are the most successful gymnastics coaches ever, having completely revolutionized the sport.

Forty years after Bela and Martha coached their 14-year-old Romanian protege Nadia Comaneci to unprecedented perfect 10 scores, Martha has taken this year’s American women’s team to the podium for gold.

In Rio, they easily won the gold for team all-around, defeating the Russians in what is considered a landslide. Simone Biles is expected to garner several more golds, while Aly Raisman will likely reprise her London 2012 successes with a few more medals.

But along with the celebration this summer, there are tears.

This is the last team Martha Karolyi will be coaching.

She’s said that she’s cried only twice in her coaching career: The first time was when Nadia scored her 10. The second time was this past Tuesday evening, when she learned that her American team had chosen their nickname—a tradition at each Olympics—to honour her. They announced that they wanted to be known as “The Final Five.”

“We’re the Final Five because this is Marta [Karolyi’s] last Olympics and without her none of this would have been possible,” Aly Raisman said. “We wanted to do it for her just because she’s there with us every single day.”

Martha Karolyi and her husband defected from Romania in 1981 after being instructed to bring more teachings of communism into their successful gymnastics school.

They brought with them their emphasis on a centralized training system and strict methods—so rigorous and demanding that some critics characterized them as cruel—and in doing so, transformed American gymnastics.

“When you step in the gym, that is discipline. There is structure every single moment,” Martha told NBC.

Their first success in the U.S. was in 1984 when Mary Lou Retton became the first American to win gold in the women’s all-around event.

More success followed with 1991 world champion Kim Zmeska and Kerri Strug, who was a member of the Olympic team gold in 1996.

Bela became director of the U.S. team—the official title is national team coordinator—for a little over a year before the Sydney Olympics in 2000 but the Americans had little success at those games.

Martha took over in 2001 and has led the U.S. women’s gymnastics team to four Olympic medals.

She’s said she’s retiring because “everything good must come to an end.” She’ll continue to work with gymnasts at the Karolyi Ranch in Texas, which is really a training camp, with cabins and gyms.

Each cabin is named for the Olympics where a member of the U.S. team won the all-around gold—Los Angeles, Athens, Beijing, London.