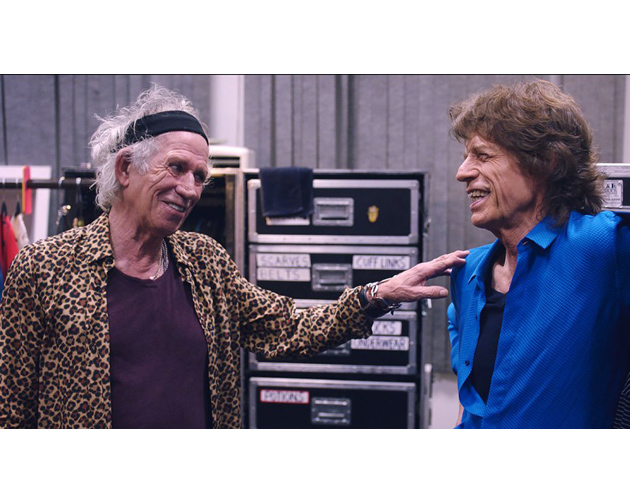 Keith Richards and Mick Jagger in a still from the film The Rolling Stones Olé Olé Olé: A Trip Through Latin America.

If you’ve ever wondered why the Rolling Stones keep touring and playing concerts after more than 50 years together—and haven’t we all wondered about that?—filmmakers Julie Jakobek and Sam Bridger have an answer that perfectly explains why the Stones don’t—and won’t—stop.

The answer is 96 minutes long, and it’s called The Rolling Stones Olé Olé Olé: A Trip Through Latin America.

It’s a documentary film of the band’s 10-city tour earlier this year, ending with a wildly climactic free concert in Havana. (The film of the Havana concert, Havana Moon, will have a one-day cinema release worldwide on Sept. 23).

It’s very clear that performing for enormous adoring audiences—especially in places where the band’s never been but are revered, where rock and roll was banned in the ’60s and 70s, like Cuba and Buenos Aires—is what stokes these aging rockers’ vitality and virility.

Olé Olé Olé was shown at the 2016 Toronto International Film Festival (TIFF), and producer Sam Bridger and executive producer Julie Jakobek were in Toronto to talk about touring with the Stones and filming them on stage and off.

What insights did you get into who they are?
We were quite keen to get a sense of the men behind the myth—who they are, what motivates them. They’ve seen it all but they’re still hungry for new experiences. They do it for the love of doing it. And what you see on stage really is who they are.

How much of a challenge was it to get all that vitality and passion and connection with the audience to the screen?
It’s always a challenge to get all that energy and emotion that you feel at the concerts. But all the emotion and energy was there. They made it easy because it’s real—all that energy from seeing the Stones in any of those countries, added to what their presence is in those countries.

The Havana concert, the Stones’ first concert there, is the climax of the film. How did that come about?
The road to Cuba was the hook in the film. We didn’t know if it was going to happen. There was no precedent for this kind of concert in that country and there were huge logistical concerns. It was a little bit too exciting, wondering if we were going to have an ending to our film. We were in a holding pattern, with the whole crew waiting to mobilize and the date (eventually postponed because of the Pope’s visit) was getting nearer and nearer.

What was the significance of the Havana concert?
The Stones didn’t want to make a run-of-the-mill tour film. We wanted to make something that had a bit more to say. The Stones are so much more than just a rock and roll band. They’re a symbol of rebellion and freedom. And in Cuba, they were appearing for the first time in a country where rock and roll was banned until the ’80s. To us, they’re almost an institution, we almost take them for granted. But to the Cubans, that connection with rebellion is so visceral.

The Stones don’t seem to take their fans for granted.
The band appreciates that swell of affection they had everywhere. They do work really hard. It means a lot to give it everything. They were out there in the pouring rain, out there with their fans.

What’s the relationship between Mick and Keith?
It’s been said that they’ve not always got along but they always rise above it. The music and chemistry on stage override everything. They’ve been through so much together, lived their lives together, so they have ups and downs. But we’ve never seen any evidence of anything other than what you see in the film.

(One of the most magical scenes in the film is Richards and Jagger just sitting around, doing a spur-of-the-moment acoustic version of “Honky Tonk Woman.”)

The Stones won’t stop, will they…?
As long as the four of them are well and healthy—and they are—they’ll just keep going. They’re still pushing to do new things. We were always hearing snippets of plans for the future. They’re interested in virtual reality, in all kinds of things. They don’t seem to be losing their appetite for new experiences. That’s what I love about the Stones. There’s no precedent for what they’re doing. They love what they do. While we were filming them on tour, the word that came to mind about them was “hungry.” They’re hungry to keep pushing themselves.

And musically, they’re very in touch with pop culture now. Musically, they’re always trying to expand. Whatever they do, they make it The Stones. There’s an exhibition in London, a new album coming out, gigs in the U.S…

Both Havana Moon and Olé Olé Olé were sold to Crave TV during the 2016 Toronto International Film Festival. Olé Olé Olé will debut Oct. 14 on Crave, followed by premieres on The Movie Network, Bravo! and MUCH, and a broadcast premiere on CTV at an unspecified date. Havana Moon will launch on Crave in January 2017.