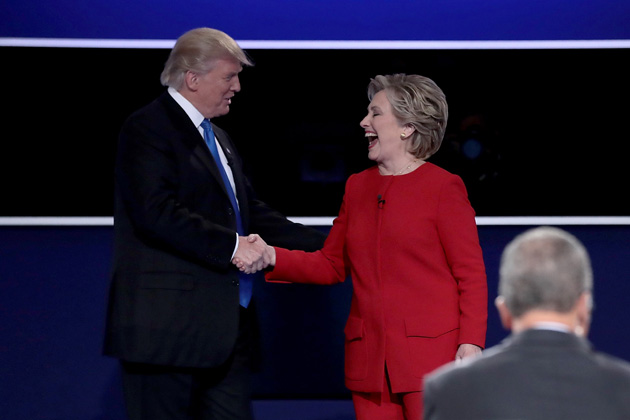 Hillary Clinton keeps her cool during last night’s presidential campaign. Donald Trump on the other hand—not so much.

I set the alarm for 2:45 a.m., threw on my coat to keep warm, and crept quietly down to the kitchen to watch the debate live-streamed on my computer.

I’ve been travelling in Central Europe—Hungary, to be precise (something Donald Trump will never be), on the way to Romania.

But there was no way I was going to miss watching the live debate.

I knew it had to be an historic, anything-can-happen moment in time.

At first, I was upset that moderator Lester Holt gave Trump so much time to talk, while Hillary Clinton listened patiently and attentively.

Then I realized that giving him the time to unravel and to talk repetitively in circles was actually doing Clinton a favour.

I also doubt that anyone, including the undecideds, would be persuaded by the debate to vote for either candidate.

Americans who want to put Trump in the White House are looking for a leader who will break with convention and do something different.

“Why not give him a chance and see what he can do,” is their mantra. They’re not put off by his insistence, repeated during the debate, that using loopholes to avoid taxes and cheering for the housing debacle is just plain smart business.

Mostly, though, Americans who will vote for Trump are voting for change and whatever he says is beside the point, totally irrelevant. Perhaps most notably, the change they’re looking for is definitely not having a woman as president.

Watching a smart, poised, cool woman turn a macho man like Trump into a blithering fool (not that he needs any assistance) does not endear her to a majority of American men, or win their votes.

Some pundits were still complaining about her lack of likability and wonkiness when I gave up and turned the computer off around 5 a.m.

When are they going to realize that for a woman to be “likeable,” she has to be deferential, charming and gentle—none of which demeanours are appropriate for a presidential candidate.

I went back to sleep for a couple of hours after the debate and when I came down for breakfast at the B&B where we’re staying, the French couple from Rheims were already there, enjoying their cafe au lait and eggs with golden yolks.

“He has some good ideas about security,” said the man, who speaks some English, “but he is all blah, blah, blah. He is an idiot.” He shook his head sadly. “Americans!”

Then he went on to complain about French politicians.

I wished him “bon voyage” and wondered who I’d meet for a postmortem after the next debate, when I’ll be in Moldova.