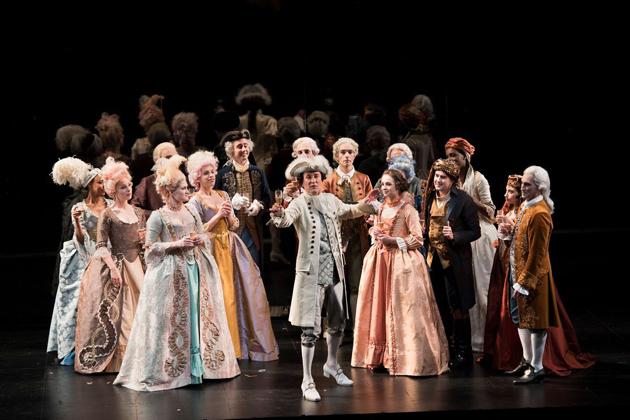 The Canadian Opera Company’s preview of the 2017-18 season got off to a rousing start Thursday night at the Four Seasons Centre when music director Johannes Debus, on stage with COC General Director Alexander Neef, talked about how much he liked working here.

“It’s a very civilized place,” remarked the German-born conductor, who travels all over the world. “Maybe one of the last bastions….”

That remark amused the audience because everybody knew he was talking about the nation next door and other international trouble spots. But the evening was not about politics. It was all about opera and the launch of the next season.

One piece of big news was the appointment of Jane Archibald as artist-in-residence, a first for the company.

The Nova Scotia-born coloratura soprano has performed at the Met, La Scala, Paris Opera, Vienna State Opera, Covent Garden and more, but she’ll be spending the better part of next season in Toronto.

Archibald will be making two role debuts with the COC. She’ll appear first as Zdenka in the season opener, Richard Strauss’s Arabella, a COC premiere, with Erin Wall in the title role.

Later in the season, she’ll perform as the Nightingale in Robert LePage’s production of Stravinsky’s The Nightingale and Other Short Fables.

Archibald will also appear here in one of her signature roles: Konstanze in a new COC production of Mozart’s The Abduction of the Seraglio, last presented by the COC in 1980.

Two more Italian favourites, both by Donizetti, will be mounted in new productions:

Another Italian favourite makes a return engagement to kick off the new year of 2018.

The season begins October 5 with Arabella and ends May 26 with Anna Bolena.

Subscription prices for all six operas begin at $199. For more information about the operas, the performance schedule and tickets, go to coc.ca.