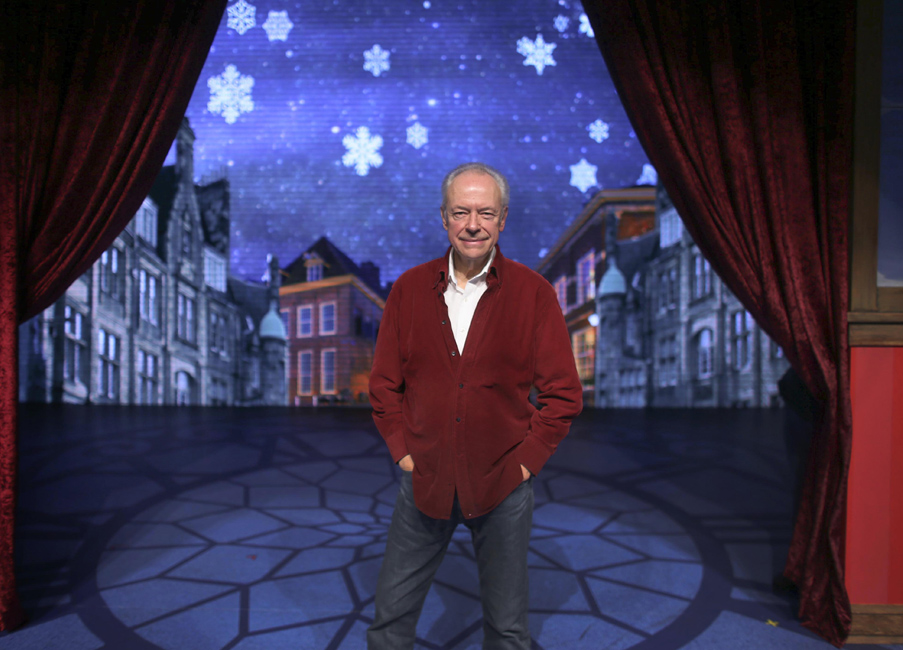 Ross Petty and Santa Claus have a lot in common — both dress in distinct costumes, both make their grand appearances around Christmas and both bring joy to little girls and boys. Unlike Santa, however, Petty doesn’t mind getting showered with boos from the kids when he shows up.

For 23 years and counting at Toronto’s Elgin Theatre, Petty’s family pantomimes have proved a beloved Christmas staple, depicting treasured tales like Snow White, The Little Mermaid, Aladdin and Robin Hood with his own Canadian-centric comedic and musical twist. Kids love the familiar fairy tales and stories while half the jokes in the show swoosh over their heads and hit the adults in the audience firmly in the funny bone.

Petty, now 72, traditionally played the show’s villain, entering to a chorus of jeers from the kid-heavy crowd every night, like a hometown Grinch getting his comeuppance. He relished every moment of it. But in 2015, at age 69, with the pressures of both starring in and producing the shows weighing on him, Petty retired from the stage.

“It was essentially a tough choice for me because I had to give up what I loved doing most and that was being on stage and berating the audience and being the bad guy,” he says. “But again, there was no one waiting in the wings to say ‘Hey Ross, I’ll produce the shows and allow you to just go out and do what you love, being on stage.’”

In other words the show must go on and, if that required Petty to step off the stage and concentrate solely on his producer role, so be it. He took his final bow as Captain Hook in the 2015 production of Peter Pan and, since then, has enjoyed something of a semi-retirement. Or has he?

“Here’s what I think is important for readers to understand — you should keep doing what you love to do,” Petty says when I ask for his tips to enjoying semi-retirement. In fact, it doesn’t really sound like any sort of retirement at all.

“I can’t imagine, for instance, myself sitting at home and reading or being out in the garden or working out or something because I think it’s just really important to keep yourself engaged both mentally and physically with what you love to do,” he explains. “I’ve heard of too many folks who kind of say, ‘Okay, I’ve reached that age and it’s mandatory now for me to step away from my job’ and then I think they’re kind of at a loss. So that’s why it’s important. If they can’t maintain what they’ve been doing as a vocation, then there’s something really important that they should be working on and perhaps that’s helping others in need and volunteering, things like that.”

And Petty’s vocation is, without a doubt, the stage. Born and raised in Winnipeg, Petty told Zoomer a few years back that, as a child, he “had a map of North America on my wall and I had New York circled in red ink on that map because I always wanted to get to New York and I always wanted to be on Broadway” — a dream he realized in 1979 in a production of Arthur Kopit’s play Wings. He performed on stages across North America and in London’s West End, including alongside Ginger Rogers and Sid Caesar in an American production of the musical Anything Goes, and worked in television as well — most notably on the soap opera All My Children — before landing in Toronto in the early 1980s to perform in traditional English pantomimes staged at the Royal Alexandra Theatre by British producer Paul Elliott. He met his future wife, famed Canadian ballerina and National Ballet of Canada artistic director Karen Kain, during one of those productions and within a few years he was helping to produce Elliott’s shows. Petty never looked back, launching his own, distinctly Canadian-flavoured pantomime series for children in 1996. And it’s precisely that period of his career that he returns to when I ask him about his own most memorable moments producing theatre in the city.

“I think it’s how the people of Ontario have taken us to their hearts … It was a very difficult road in those first couple of years because here we were in a brand new theatre for us and … frankly, there were very difficult financial returns in those early years at the Elgin,” Petty says. “And this is something that you can take forward to [your] audience – the ability to be relentless and stick to what you love to do and see it through in spite of all the obstacles in your way. If I had not had the courage to move forward over those first two or three years, when I was losing money, we wouldn’t be here having this conversation 23 years later. So, be relentless about what you love and keep that moving forward.”

As well, the holiday pantos have featured a plethora of famous and beloved Canadian faces over the years. Petty fondly recalls working alongside “Mr. Dressup” Ernie Coombs on three pantos, comedian Don Harron, pro wrestling great Bret “The Hitman” Hart, radio host Erin Davis and, of course, his wife Karen. “All these really wonderful people who came from different walks of life and had really a wonderful experience with us and therefore made it a great experience for our audience.”

And it’s that audience experience that Petty remains focussed on as he and his team head into this year’s production — The Wizard of Oz — for which tech rehearsals were set to begin when we spoke. Petty typically recycles the fairy tales/stories his productions perform every six or seven years. And the last time they staged the Wizard of Oz, in 2011, Petty himself donned the pointy hat to play the Wicked Witch of the West.

“I still miss the audience’s boos,” he says, “but we‘ve had a really wonderful cast over the past couple of years and in this year in particular, we’ve had a terrific young woman, Sara-Jeanne Hosie, who is the Wicked Witch of the West. And I think she is a very equal match to the evilness that I used to bring to the stage.”

No two productions are the same from year to year, meaning this year’s Wizard bears no resemblance from the 2011 version. I press Petty for more details but he offers few.

“We start out in Toronto in Kensington Market and we have references to Ossington — get it, Oz, ‘Ossington’ — and of course then we do end up with Dorothy and her pals in the Land of Oz,” he offers. “I don’t think I can tell you too much more about the plotline, Mike, because that will give away too many secrets.”

One thing he can’t contain, however, is his pride in having introduced thousands of children to the magic of live theatre over the years. “I have so many people that come up to me at the Elgin during a show and they say to me, ‘My parents took me to see your shows when I was a kid and now I’m bringing my children.’ The tradition keeps moving on and again, it was important for me to keep that moving forward rather than having to worry about how I felt about being on stage because the other element is much more important than my self-satisfaction.”

And, of course, then there are the moments when the reality of the impact of his work hits a personal chord, like when he received a letter recently from a woman who’d brought her children to his pantos every year. This past year, however, her son died in a motorcycle accident and she doesn’t feel that she can attend the upcoming show with only her daughter because it wouldn’t feel right without her son.

“And of course it brought tears to my eyes — I’m kind of getting choked up talking about it now,” he admits. “She also wanted to offer to be able to give a gift in memory of her son to a family in need and I said that we would do our best to certainly make that happen. So, I mean, that’s certainly what I’m thinking of at the moment.”

It’s clear that so much of Petty’s heart and soul is in these pantos, and as he prepares to head back to work I ask him his secret to staying so active and healthy at age 72 while keeping to his hectic production schedule. Petty laughs out loud.

“I don’t think that I’m necessarily the best person to ask about staying healthy!” he says. “It’s show business after all. We have late hours and we don’t eat properly a lot of the time when we’re in the theatre … I don’t sleep well at all because I’m always anxious about how the show’s going and how’s the box office, all those kinds of things.”

“Tell [your readers] not to get into show business,” he adds with a chuckle, “because that’s not healthy at any stage of their lives.”