Rick Mercer Returns to ideacity for the First Time Since 2003 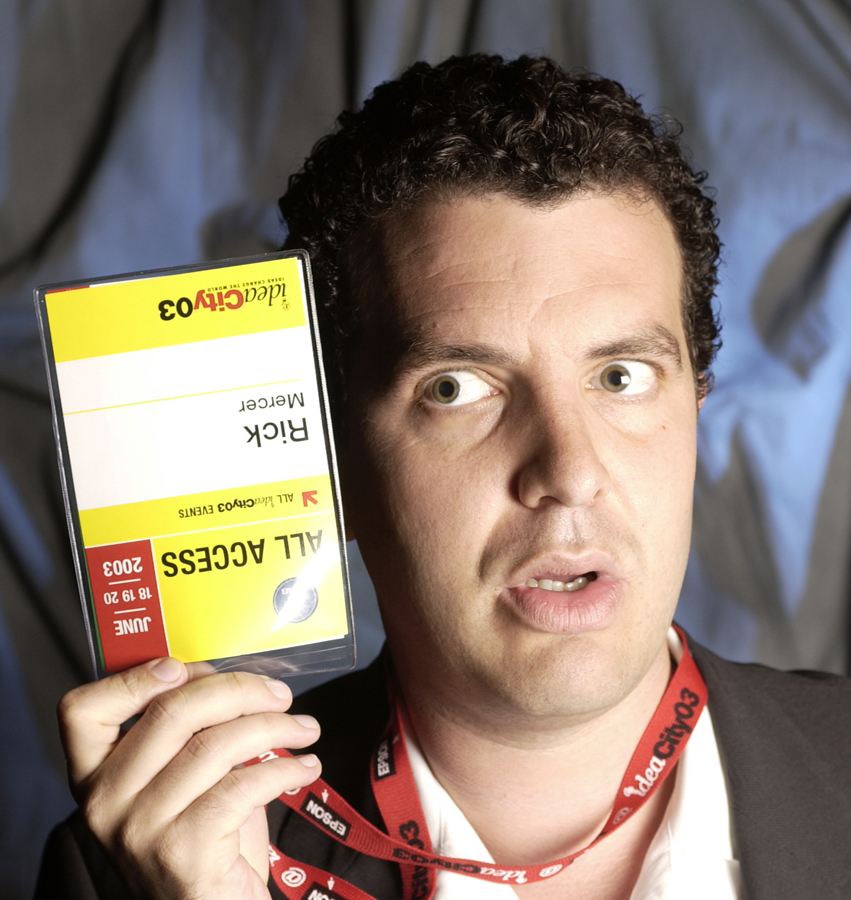 When Rick Mercer first appeared at ideacity in 2003, the This Hour Has 22 Minutes star did so with trepidation. Still a year away from the debut of his hit CBC series The Rick Mercer Report, Mercer used his time at the event to discuss the “tyranny of ideas.”

“The entire notion of ideas, quite frankly, terrifies me,” he began. “This is my first ideacity and sitting in the back row and watching everyone who has PhDs and stuff.  I have an honorary high school diploma from a school for the learning disabled.”

What Mercer lacked in PhD’s however, he made up for in LOLs, keeping the audience in stitches with behind-the-scenes stories of his TV work and, at that time, his most famous TV sketch, the patriotic man-on-the-street feature “Talking to Americans.”

Now, sixteen years after his first appearance, Mercer, 49, returns to ideacity in 2019. And in honour of his return, we look back on an interview Mercer did with Zoomer’s Ages & Icons podcast at the end of 2018 (which you can listen to on the player below), following the end of The Rick Mercer Report’s 15 season run and the release of his new book of rants, Rick Mercer Final Report.

MIKE CRISOLAGO: In Rick Mercer Final Report you note that you’ve had a lifelong passion for rants. Now that the show is over, do you experience rant withdrawal?

RICK MERCER: No, because I can just rant at home or rant on the telephone with someone. The difference is the way a rant is created. I would essentially create six, seven pages of what I thought my personal reaction to a certain situation was and then I would distil it and try to successfully illustrate an idea or a concept and a point of view inside of like a minute and twenty seconds. And I don’t have to do that anymore. Now I can just get you on the phone and go, “Can you believe blah, blah, blah, blah, blah?”

MC: When going back through your old rants for the book, did you gain any new perspectives on any of the issues you covered?

RM: My perspective always changes. I think one of the problems with politics today and ideology is people just become so locked in. Like, they have their team, they’re just locked in, they don’t care that their opinions don’t change and that’s a really bad thing. I’m proud of the fact that my opinions change over the years. I just think that that’s a natural thing to have occur.

MC: Absolutely. I think of it in terms of how you, for example, did a sketch where you were in bed at 24 Sussex Dr. and then-Prime Minister Stephen Harper read you a bedtime story. And it’s hilarious. But if you did the same thing with Donald Trump today people would see that as an endorsement of Trump and his policies, as opposed to a non-partisan piece of sketch comedy.

RM: That’s almost a valid criticism because one of the ways in which I changed was I stopped having politicians on the show. I always believed it was a mutually parasitic relationship — we both benefited — but then at a certain point I thought, you know what, they’re benefiting a bit more, or a bit too much, and that’s not my job … There were always exceptions, but it was my bread and butter and then it became the exception rather than the rule.

RELATED: Rick Mercer Talks Not Retiring, His Early Years and All Those Stunts

MC: Along with the rants, your new book contains a number of longer pieces you wrote reflecting on various elements of The Rick Mercer Report, from the crew you travelled with to working with Jan Arden to getting Pierre Burton to roll a joint. Why was it important for you to reflect on those subjects?

RM: Anyone in show business, if they start telling stories, they never tell stories about, “Oh, I did this show, the audience was great and everything worked so well, and it was just a fantastic night.” They tell the story, like, “I showed up, the audience was English as a second language, the light cue didn’t happen, the audio guy was drunk…” They tell a horror story. And we all enjoy that. And so the same goes for me. I can talk about one of the great shoots … [or] I could also say, “Well, I was going to take Jan Arden in a helicopter into a bat cave and I promised her it would be okay and then the helicopter essentially crashed and the segment never made it to air because it was never shot.” And those are the stories you tell.

MC: Looking back, what are some of the things you did on the show that you just can’t believe you got to experience?

RM: I’ve been really, really lucky. There have just been certain opportunities, like zero gravity. I wanted to experience zero gravity ever since grade six [when] we watched this film of astronauts in zero gravity and I was like, “That’s the most exciting thing ever.” And so I got to do it. My brother is a commercial airline pilot and when we were growing up he loved the Snowbirds and he became a pilot. I didn’t care about the Snowbirds and then one of the first shoots on the show I got to call him up and say, “Guess what I’m doing today. I’m flying with the Snowbirds!” He’s like, “You don’t deserve to fly with the Snowbirds! You made fun of them!” I’ve done it all.

RELATED: ideacity Turns 20: A Photographic Tour of 20 Names Who Shaped The Event

MC: Which begs the question, is there anything that you wanted to do but haven’t had a chance to yet?

RM: Well I never got to hang out with Neil Young. I always thought that would be fun … I want to do it all again is what I want to do. Like I want to make sure that I get above the tree line again and I want to explore Haida Gwaii. There’s so many places in the country I want to explore, but properly this time because even though I got to see a lot of the country I also got to see the Coles Notes of many of these places. I’ve been to X, Y, Z but sometimes it was for 24 hours, so that’s not really exploring it.

MC: In one of your last rants you implored Canadians to go out and see their own country. What have been some of your favourite places to travel in Canada?

RM: I would tell anyone if they ever had the chance to stand above the tree line, they should do it. It’s a tricky trip but the culture shock you can experience in your own country is as great as the culture shock you experience going anywhere else in the world. And it’s just stunning and it’s beautiful and it’s your own country and it’s so rarely reflected in pop culture that most know absolutely nothing about it. Obviously I will tell everyone to go to Newfoundland because I’m from there. But … the more I travel the more the landscape spoke to me and I realized how lucky I am. It’s a very difficult country to travel in because it’s expensive and we’re so big but  if anyone can, even a couple of hundred kilometers down the road can make a world of difference.

Catch Rick Mercer’s appearance at ideacity 2019 by purchasing tickets here, or watch his talk on the ideacity live stream available on the EverythingZoomer.com homepage.