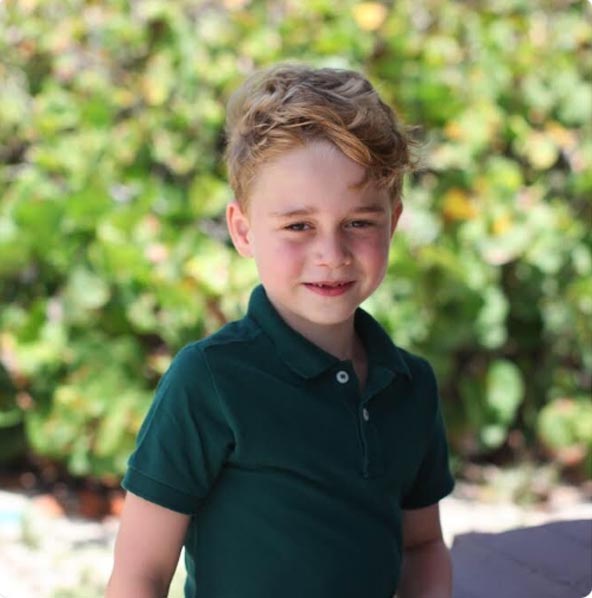 In two of the photos, snapped in the gardens at Kensington Palace, the future king beams at the camera, showing off a pair of missing baby teeth and wearing a jersey of England’s National football team. Appropriately enough, the soccer team tweeted a birthday greeting to George (above), at the same time commenting on his “great choice” in clothing, attire we will likely see again if he follows in his father’s footsteps – Prince William is a huge fan of the sport and serves as President-Designate of the country’s Football Association. In the third photo, royal watchers were quick to point out the little prince is wearing a dark green polo shirt from H&M, which retails for just six pounds, or less than $10 CAD.  Nonetheless, George is celebrating his birthday in princely style indeed, while holidaying on the private island of Mustique with siblings Princess Charlotte and Prince Louis, and parents, Prince William and Kate.

This autumn, he will start his second year at the prestigious private school Thomas’s Battersea in London.

Prince George, the great grandson of Queen Elizabeth II, is third in line for the throne, behind his father, Prince William, and grandfather, Prince Charles.