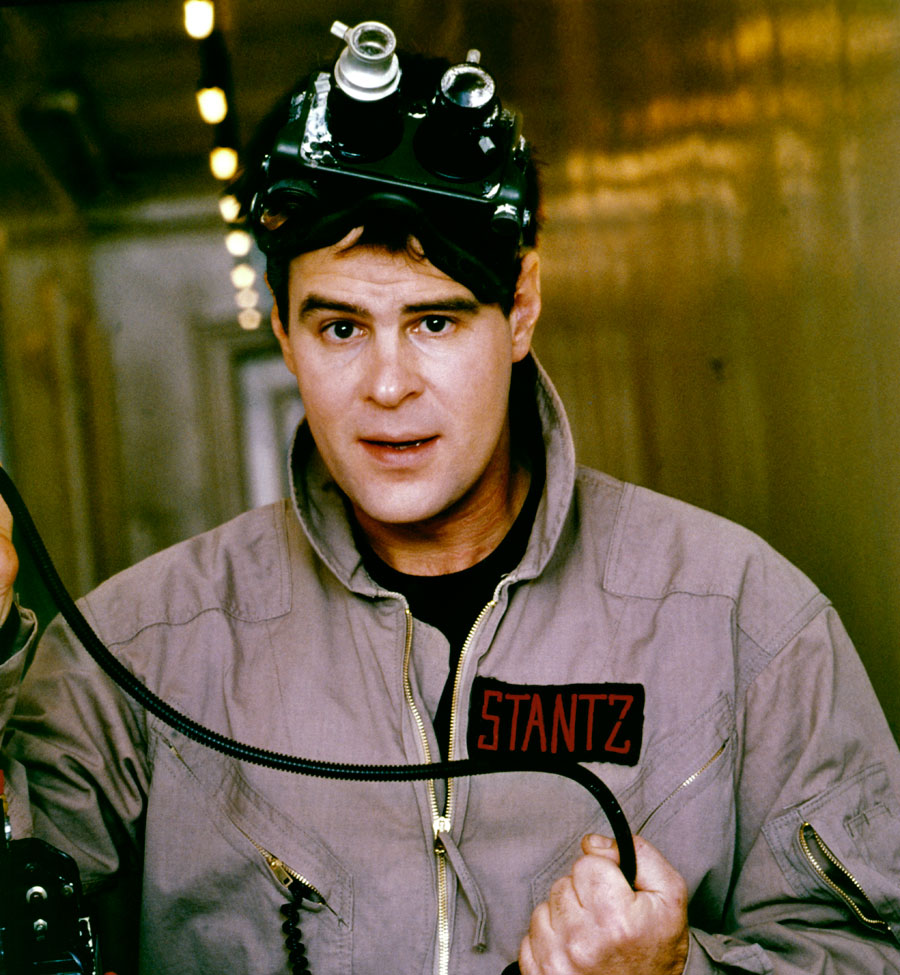 In Sydenham, Ont., just north of Kingston, there’s an unassuming white farmhouse built around 1860 by the Aykroyd family on land they settled near the turn of the century. It’s a spacious, well-kept home with multiple rooms and a wide open kitchen where generations of Aykroyds no doubt congregated over the last century and a half. Just off the kitchen, however, you’ll find a small forest-green room adorned with faded sepia family photos nearly as old as the home itself. Against one wall, there’s a couch and, directly before the fireplace, a small wooden table with two chairs.

This, it turns out, is the family séance room, where Samuel Aykroyd and a local medium helped people contact the spirits of their loved ones in the 1920s and ’30s. In pop culture lore, it’s also the room where, in the early 1980s, Samuel’s great-grandson Dan Aykroyd — at the time a Saturday Night Live alumnus riding high off the success of the 1980 Blues Brothers film — conceived an idea for a comedy based on a team of paranormal scientists hunting down ghouls that eventually became Ghostbusters.

In 2015, Aykroyd and I sat at that same table in the same séance room where countless others gathered over the previous century to make a connection to a realm beyond our physical world. And with my 1980s Ray Stanz Ghostbusters action figure in hand and amid anticipation for the upcoming 2016 all-female Ghostbusters reboot, I asked the Canadian comic legend if he could foresee a time when he’d play Ray on the big screen again.

“No, that was a totally mutual decision across the board,” he told me. “It’s hard. The sequel can’t happen because we don’t have Harold [Ramis, his co-star and co-writer, who passed away in 2014]. Billy [Murray] doesn’t want to play the part anymore. So [we’re] talking maybe prequel, talking other exploitations.”

What a difference four years makes.

Not only is a sequel — Ghostbusters 2020 — confirmed for next year but the 67-year-old Aykroyd is reprising his role as Ray Stanz in the movie alongside fellow Ghostbusters alumni Ernie Hudson, 73, Sigourney Weaver, 70, and Annie Potts, 67, in their original roles of ghostbusters Winston Zeddemore, Dana Barrett and Janine Melnitz respectively. And in a recent interview with the podcast The Greg Hill Show, Aykroyd confirmed Bill Murray’s participation in the film, presumably as his original character Peter Venkman.

“We’ve shot our part, myself, Murray, Sigourney and Annie Potts, and it was really exciting working on this new idea and new take on the story, which [director] Jason [Reitman], who’s a really incredible and fine filmmaker, came up with,” Aykroyd said. He also described the upcoming film as one that, “hands the legacy off to a new generation of stars and players and actors and characters,” which includes Canuck director Jason Reitman, the son of director Ivan Reitman, who helmed and produced the first two original Ghostbusters films.

The same Ghostbusters alumni appeared as different characters in the 2016 all-female reboot film, while the late Harold Ramis, who co-wrote the original films with Aykroyd and played ghostbuster Egon Spengler, appeared as a marble bust in the reboot. Aykroyd confirmed that a similar tribute to Ramis would take place in Ghostbusters 2020.

Four years ago, however, while sitting in the Aykroyd séance room, the actor and I discussed his family’s fascinating history with mediumship and the idea for the Ghostbusters concept that originated in that very spot.

The History of the Aykroyd Séance Room

DAN AYKROYD: My great-grandfather Sam was a dentist in Kingston, Ont., and he was the reviewer, basically, for the local newspaper, the analyzer for whatever psychic acts were coming through town. Millions of men died [in total in the First World War]. So you’ve got families that were desperate to try to reach them. And mediumship and spiritualism became very popular then. But you had to have someone to sort out the hoax from the real thing. So my great-grandfather was considered basically an observer of this phenomenon. This room was where they had the séances.

My dad was a little kid watching the séances here in the’20s and ’30s. On Sunday, three or four big black cars would roll up and the women would come dressed for Sunday church and the men in suits. My great-grandfather Sam would hold the table here. And [medium] Walter Ashurst would sit, and [they’d] hold hands and then, within minutes, Ashurst would go into a full-on open-mouth-agog trance, and they would ask him questions. So this is kind of my family business.

How His Family History Informed the Idea for Ghostbusters

DAN AYKROYD: I’m sitting one afternoon [and] I’m reading about quantum physics and parapsychology. And I go, “Would it be great to do an old-style ghost comedy but use the knowledge that people have been researching for years?” So that was where Ghostbusters came from — one afternoon sitting in this room because this is where, reportedly, spirits came through Walter Ashurst. He was a local motor mechanic at the local factory here. And he did have a gift. He moved to Los Angeles eventually and was in the psychic community there for many years.

Getting Ghostbusters From the Séance Room to the Screen

DAN AYKROYD: I would say the perfect components came together in that project. I’ll start with the original script and then plugging into Harold’s knowledge. And Harold was not a believer at all. He was a complete sceptic but he knew all about the work of … all the people I was reading about, the research that was being done in the paranormal. And, of course, also mythology having to do with spirits and ghosts and otherworldly, other-dimensional things. So we had a conversation immediately from the start. The perfect component was the origination of the script. Then you had Michael Ovitz, the super-agent. Then you had Ivan Reitman. There was another perfect component.

So Ovitz brings in Reitman; Reitman brings in Ramis. We sit, the three of us, we write the script, partially in L.A., partially here, particularly in Martha’s Vineyard. And then we finish it and we go, “Look, there’s only one guy we’ve got to give it to.” We all agree at Art’s Deli. We all say, “We’ve got to give it to [Bill] Murray,” and I said, “I’m in.” So then we bring in the perfect component of Murray. Then Rick Moranis and Sigourney Weaver … these actors and artists and creators at the peak of their gifts and really genuinely wanting to be part of a team.

On the 2016 All-Female Ghostbusters Reboot

DAN AYKROYD: What we found is that there are creators out there, of the next generation and the one beyond it, who have watched Ghostbusters and were influenced by it and kind of want to make it their own. And Paul Feig had this great idea to do it all female. And Ivan [Reitman] and myself and Billy [Murray] just looked at the idea and said, “Please take a crack at this.” And … he’ll be delivering a really fine, fine movie and a big hit. He’s making a hit movie. Leslie Jones is going to steal the show. And from what I saw [filming] in Boston and just the new hardware, the way they’re handling it, they’re badass. And they’re all just the most accomplished comic actresses of our time.

DAN AYKROYD: We have one that will never die with Ghostbusters because it just worked because everybody was working together and with a view towards giving a totality of the entertainment and not worrying about one’s individual contribution or who got credit for what. We were all there to make the best film that we could.

Dan Aykroyd and Friends Unveil Stand Up to Cancer Canada