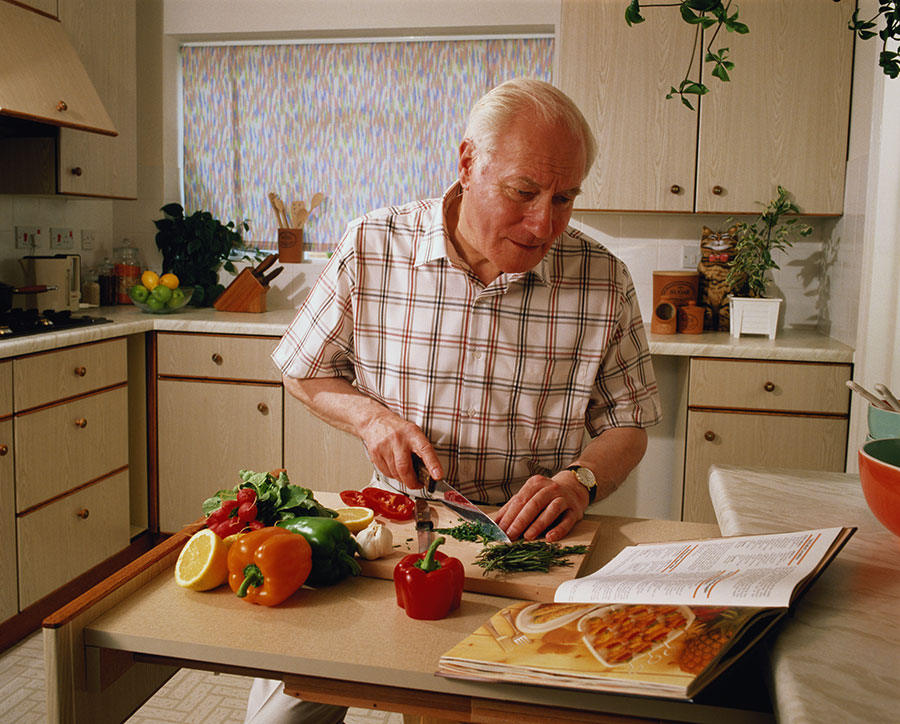 Christmas is coming, which is no doubt why the new 1,156-page Joy of Cooking was published this month, but there is another occasion befitting of the American kitchen bible with 20 million copies in print: marriage.

Many of our readers who shared stories and pictures of their copies of Joy on EverythingZoomer’s Facebook page said they received the cookbook as a wedding present, including Ann Campbell (1964), Barbara Zihrul Eastman (1968), Patricia Murphy (1970) and  Monica Johnston, whose 1980 copy is falling apart. “I learned how to cook from it,” she writes on Facebook.  “My favourite recipe from it is the apple pie.”

Meanwhile, Barabara Canning can’t do without the mulligatawny soup, and my neighbour Anne Longmore says, like me, her most splattered pages are the ones with banana bread and pancakes in them, while How to Roast a Turkey comes out every Thanksgiving. After the cover peeled away from the spine of her husband’s 1974 version, they wrote over it in blue marker so they could pick it out on the shelf.

Sue Wood, who has a 1967 edition, asked via our EverythingZoomer Facebook page whether the new book includes instructions on how to skin a squirrel. I thought it didn’t make the cut but I was mistaken. It is included in a section on “small game,” along with opossums, muskrat and beaver (a.k.a “roadkill”), where authors John Becker and Meghan Scott tell readers that prepping a squirrel is the same as skinning a rabbit. It notes that Scott’s grandfather, who hails from North Carolina, swears squirrels make “the finest gravy.” (The big game section includes a recipe for Braised Bear.)

My Toronto neighbour Karen Mondok, who is a home cook approaching professional status, sent me a picture of her 20-year-old copy of Joy, which has lost its cover. “We’re part of the pancake crew. Also, every gravy, quick bread and coffee cake.,” she writes. ” I’ve made the Peanut Butter Cookies recipe so many times that I no longer read the recipe!”

Pamela Campbell Dalton sent in a picture of her 1963 edition, which belonged to her husband’s aunt. “I love all the markings on the page of what they loved to make, like Hunter’s Chicken,” she wrote via Facebook. Also known by its Italian name, Chicken Cacciatore, this tomato-based stew can also be made with rabbit and is often served with polenta.

I had a hilarious note from my friend Melanie Abbott in Iqaluit, who says she has only ever made one thing from her copy of Joy: the cosmopolitan cocktail. On the other side of the country in Vernon, B.C., Gwyneth Chase says she doesn’t cook much anymore, but she has a copy of Joy she saved from a fire that destroyed her trailer, and she used to favour the bread recipes. In the most Canadian story ever, Chase once used Joy to help her figure out how to butcher a sheep that met an untimely demise when it fell through some ice.

One of our all-time favorite cakes. It is thick, golden and rich with olive oil. It reminds us a bit of pound cake but with an Italian twist.

Preheat the oven to 350°F. Coat a 9-inch springform pan with cooking spray and line the bottom with a round of parchment paper.

Whisk together in a medium bowl:

Whisk together in a large bowl:

Fold the flour mixture into the olive oil mixture just until combines, and scrape the batter into the prepared pan. Bake until a toothpick inserted into the center comes out clean, about 1 hour 15 minutes.

Let cool in the pan on a rack for 30 minutes. Run a thin knife around the inside of the pan, and remove the pan ring. Let the cake cool completely on the pan base.

This is Marion Becker’s banana bread, and we think it is just about perfect.

Whisk together in a medium bowl:

Beat in a large bowl, with an electric mixer on medium speed, until creamy:

Add the dry ingredients and stir just until combined. If desired, fold in:

Scrape the batter into the prepared pan. Bake until a toothpick inserted in the center comes out clean, about 1 hour. Let cool for 10 minutes in the pan on a rack, then turn out onto the rack to cool completely.

Irma’s signature cocktail gin cocktail, a Prohibition-era staple, has been in the book since 1931, where it appeared on the opening page. Called simply “gin cocktail,” it was a solid formula for polishing the rough edges off of illicit bathtub spirits. We think it’s even better with decent gin.

A dash of orange bitters

The Joy of Cooking 9.0: Updated Version of Culinary Bible Pays Homage to the Home Cook