Diana’s ‘Travolta’ Dress Sold to British Charity For More Than $450,000 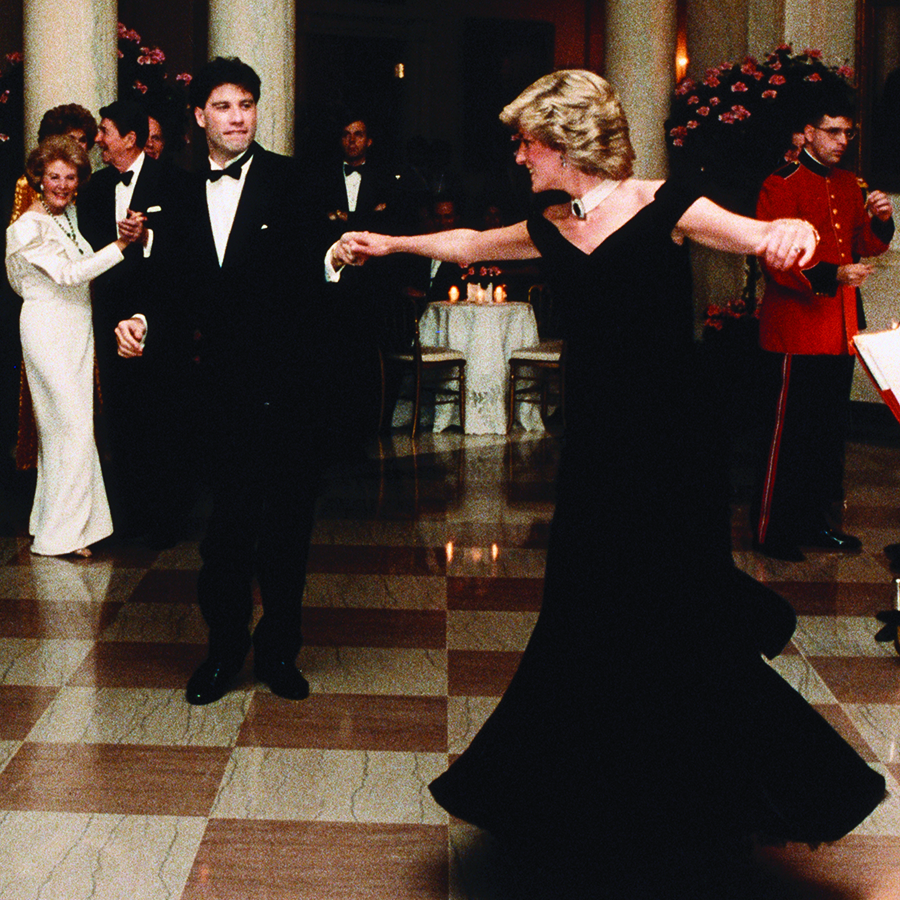 John Travolta twirls Princess Diana on the dance floor while at a White House banquet on Nov. 9, 1985. President Ronald Reagan and wife Nancy can be seen in the background. Photo: Pool Photograph/Corbis/Getty Images

It was a dress seen around the world. When Diana went for a show-stopping spin around the dance floor with Saturday Night Fever star John Travolta at a White House state banquet in 1985, the image of the Princess of Wales in the midnight-blue velvet gown by couturier Victor Edelstein went the ’80s version of viral.

Now the “Travolta” dress, as the off-the-shoulder column gown is known, has changed hands again.

It was acquired for more than $450,000 by Historic Royal Palaces, a British royal charity that manages the United Kingdom’s unoccupied royal digs, for their royal ceremonial dress collection. But the iconic piece has had several homes since it left Kensington Palace in 1997.

Diana first sold the gown as part of a selection of clothing she placed on the auction block for charity just before her tragic death in a Paris car crash on Aug. 31, 1997. It was the highlight of the sale and earned $208,000. In 2011, confusion reigned at Waddington’s in Toronto, when the same dress was part of a lot of 10 that was to be auctioned off in support of the National Ballet of Canada, but the Travolta gown and five others did not meet the reserve bids.

In 2013, an anonymous buyer purchased the dress for $416,000  as a surprise for his wife. Top that this Christmas, gentlemen! When it was put up for auction again this year, it failed to meet its reserve price but was later sold privately to HRP, which announced the acquisition this morning.

“Not only is the Travolta dress a fantastic example of couture tailoring designed to dazzle on a state occasion, it represents a key moment in the story of 20th century royal fashion,” HRP curator Eleri Lynn said in a statement. “

Indeed it does. The Travolta dress marks an important turning point in the arc of Diana’s public life. For a woman whose voice we so rarely heard, we have a treasure trove of images through the years. Diana told her own story through clothing; as she grew more confident in her role as a princess (and even more so when she separated from Charles and the generally oppressive and restrictive nature of palace life), she grew bolder in her outfit choices.

Diana Spencer entered the public eye as a Sloaney girl, just out of school. The 19-year-old nursery assistant was nicknamed Shy Di for the hair that fell over her eyes and the modish but conservative youthful outfits she wore: think Wellingtons, hatbands and ruffled blouses peeking out the top of her sweaters. Later, as a young mother, she was relegated to mumsy tent dresses with pie collars.

But this dress, chosen after she had two children and been in the public eye for half a decade, is one of the earliest examples of the sleek and sophisticated Diana we think of today. She first saw this dress at Edelstein’s studio in burgundy and had the fashion foresight to know how dramatic it would be on her in navy. Its off-the-shoulder style was sexy and, when she wore it next to Travolta, twirling in his swoony arms to a Grease medley, she looked young and modern and more glamorous than any Hollywood actress ever could. Photos of that day also show Charles looking somewhat sullen as Diana stole the spotlight, an occurrence that had become all too familiar to him.

As lovely as it was to think some guy had bought it for his wife, having this piece in a collection where it will be preserved and possibly put on display for the public to see is an important development. Diana could not have known when she first auctioned her dresses for charity the iconic place her possessions would hold. Significant couture pieces are finally being seen as part of our collective cultural history to be preserved and studied by and for future generations.

The dress was loaned to Historic Royal Properties for its 2017 exhibition at Kensington Palace called Diana: Her Fashion Story on the 20th anniversary of her death.