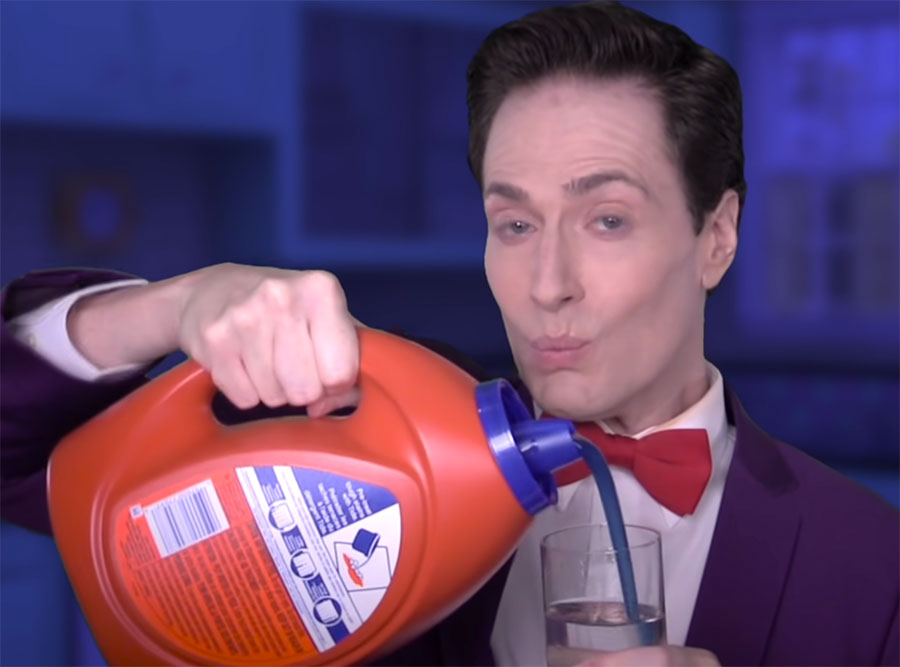 Comedian, singer, actor and satirist Randy Rainbow earned almost 6 million views for his biting YouTube rendition of “Spoonful of Sugar,” originally sung by Julie Andrews in Mary Poppins, as he riffed off U.S. President Donald Trump’s suggestion that an injection of bleach can kill coronavirus. (It can’t) Photo: Randy Rainbow/YouTube

What’s the difference? Satire is usually vicious, what’s called “Juvenalian,” in reference to the Roman poet Juvenal. But parody, which refers to updating something for your own purposes and the times, is more likely to be affectionate — a bit silly and self-mocking. In literary lingo, parody is “Horatian,” named for the Roman poet Horace.

Some of the best COVID-19 cultural responses have come in song parody. Here are 15 of my favourites.

American singer Chris Mann, once a finalist on The Voice, has emerged a master of parody. Mann borrows some of the great torch songs of the last few decades and turns them into campy angst about COVID-19 confinement. Mann’s parody of the singer Adele is pitch perfect: “Hello from the inside/it’s just me and myself and I.” He’s racked up more than 12 million views.

One of my absolute favourite parodies is the dead-pan Scottish English comic Mitch Benn and his stirring call to inaction “F–k All.”

YouTuber Bob E. Kelly’s musical rendition of “Stay the F–k at Home,” sounds like down-home advice based on the poem by YouTuber Chris Franklin. The absurdity of the genre is that it delivers satire and socially correct behaviour at the same time.

The Family Lockdown Boogie is an upbeat confinement dance routine (sort of). And 5.5 million people have seen Ben and Danielle Marsh and their four children sing their COVID-19 version of “One Day More” from Les Misérables. One user commented that they are “the von TRAPPED family singers.”

Clever rewrites work well with instantly recognizable titles. Some examples are: “Fifty Ways to Catch Corona,” “Don’t Stand so Close to Me,” and “You Can’t Touch This.”

Coordinated sing-alongs are fun, such as “Staying Inside” sung to the Bee Gees’ “Staying Alive” or the multiplication of a single voice to a chorus of YouTuber Raúl Irabién singing “Bohemian Rhapsody” as a COVID-19 cleanliness aria.

Some of the voices are truly exceptional, like the viral video of an unidentified young woman singing a parody of Camila Cabello’s “Havana”: “All of my mind is on Corona, na, na, na.” Listeners may feel like they have uncovered a gem, a voice that could deliver anything.

Songs of innocence sometimes make the most effective songs of irony.

Shirley Serban’s post as Julie Andrews singing “Super Nasty Cataclysmic COVID-19 Virus” to the music of “Supercalifragilisticexpialidocious” has that same combination of sweetness and absurdity.

Serban’s collection borrows the best from The Wizard of Oz, Mary Poppins, The Sound of Music and well-loved singers like Dolly Parton. She’s racked up nearly 10 million views.

One of the sweetest satires was captured from a slip of Prime Minister Justin Trudeau’s tongue, when he cautioned the nation to avoid “speaking moistly” on April 7.

Edmonton musician Brock Tyler’s “Justin Trudeau Sings ‘Speaking Moistly’” is an absolute gem. “You know, you have to hand it to Justin Trudeau,” Tyler told CBC. “He just immediately owned the moment as something that was just really ridiculous and fun.” That’s Horatian satire at it’s sweetest.

The highest Juvenalian honours goes to comedian Randy Rainbow. Having already developed his brand of syrupy bite, his recent parody “A Spoonful of Clorox” is a savage attack on U.S. President Trump, with a full spoon of saccharine.

The president suggested on April 23 that an injection of disinfectant could help combat COVID-19 — something that prompted emergency management officials to issue a statement warning that “under no circumstances should any disinfectant be taken to treat the virus,” as well as widespread outrage.

But perhaps the best things to come out of the COVID-19 lockdown creativity — with no obvious references to the pandemic, which makes it even better, is cultural producer Wes Tank rapping Dr. Seuss over Dr. Dre beats. This cultural mash up is brilliant.

We all need reassurance and humour especially right now. The parodies are even better if we are lured back into childhood with our favourite rhymes. It’s both funny and frightening listening to them again.

Dr. Seuss was filled with anxious calamity, absurd situations, characters doing capricious and malevolent things: the rhythm, the rhymes, the tongue-twisters, the changes of heart. Wes Tank does it all with precision and plausible naiveté, with musicality and orality, never stumbling over words or falling out of beat. He’s working his way through all the Dr. Seuss books.

Watch every day and you will feel so much better.

Julia Creet is a Professor of English at York University in Toronto.