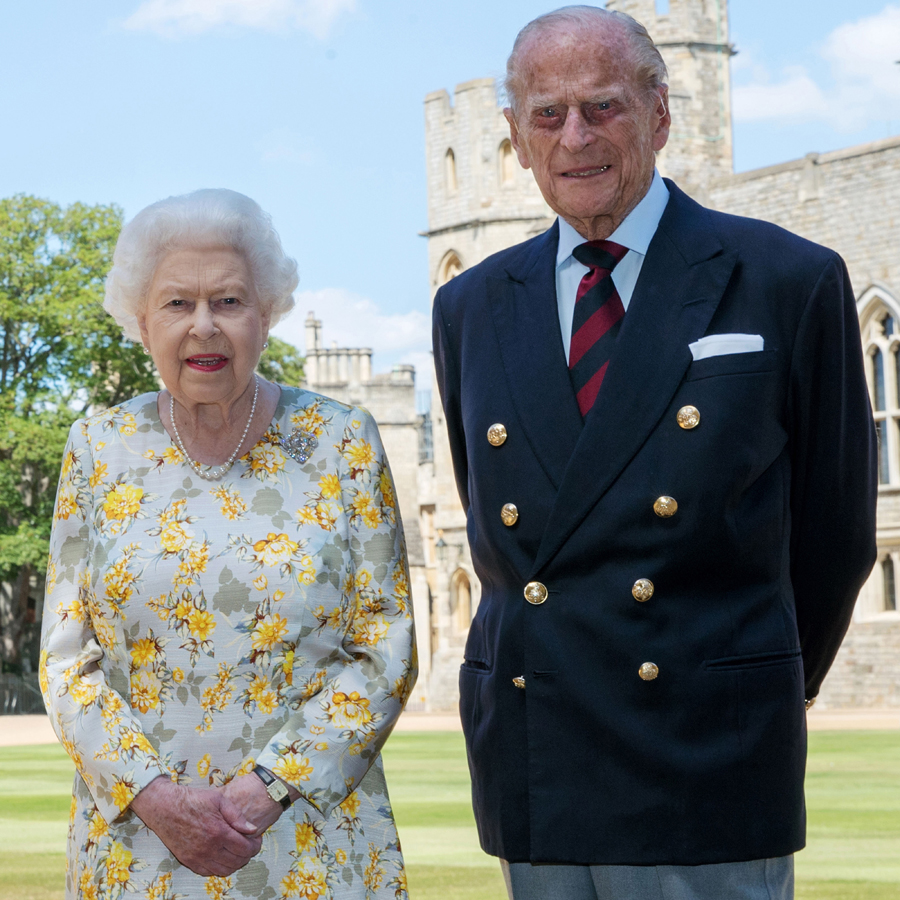 At 99, Prince Philip, photographed with Queen Elizabeth II last week in the quadrangle of Windsor Castle where the pair has been quarantined amid the coronavirus lockdown, is now officially the third-oldest royal in British history. Photo: Steve Parsons/PA Images via Getty Images

“The indomitable Duke still standing tall,” blares today’s Daily Express front page. The British tabloid’s headline celebrates Prince Philip’s 99th birthday accompanied by a new photograph of the Duke of Edinburgh with the Queen, 94, released to mark the milestone (see photo above). It was taken last week in the quadrangle of Windsor Castle where the pair has been quarantined amid the coronavirus lockdown. This birthday makes Prince Philip the third oldest royal in British history – the Queen’s paternal aunt Princess Alice lived to 102, and her mother, Queen Elizabeth, the Queen Mother, lived to 101.

The Queen looks appropriately festive in a seasonal floral dress designed by her stylist Angela Kelly and worn with the Cullinan V, a heart-shaped diamond brooch originally worn by Queen Mary. A dapper Prince Philip is also dressed in garments replete with meaning. The Duke was Colonel of the Grenadiers and is wearing his Grenadier Guards boating jacket with the regiment’s buttons from every reign reaching back to that of King William IV. He is also wearing the Household Division tie to mark his early service as a colonel in the Welsh Guards, which would have carried out this year’s Trooping the Colour, the Queen’s annual birthday parade, which was cancelled due to the pandemic.

“The only man who calls the Queen ‘cabbage’: From the night he sneaked into Clarence House after a boozy blowout to his fondness for Mary Barry … here’s 99 things you’ll be amazed to learn about birthday boy Prince Philip,” chimes in The Daily Mail, another British tabloid. Fun fact No. 88: “He is the oldest ever male member of the Royal Family” and No. 90: “He is the oldest living great-great-grandchild of Queen Victoria.” (Did No. 84 – “Even into his 90s, Philip continued to perform a 12-minute exercise routine created for the Royal Canadian Air Force” – have anything to do with this?) Despite their advanced age, the couple also looked hail and hearty – no surprise when it comes to the Queen who was photographed on May 31 riding her Fell Pony Fern. But this is the first time Prince Philip has been seen publicly in six months.

On Christmas Eve 2019, royal watchers breathed a sigh of relief when he was filmed leaving London’s King Edward VII Hospital walking under his own power and climbing unassisted into a Jeep, after five days of treatment for a pre-existing condition. In January 2019, Prince Philip escaped injury when the Land Rover he was driving turned over after he collided with another vehicle near Sandringham, the Queen’s Norfolk estate, where the Duke has chosen to live full-time in a simple cottage since he retired from official royal life in 2017 at age 95. He was given a warning for driving without a seatbelt and was forced to give up his driver’s licence.

A long-time enthusiast of both vehicle and carriage driving, the Prince’s other most reported drive was in April of 2016 when, at 94, he drove the U.S. President Barack Obama, First Lady Michelle Obama and the Queen to lunch at Windsor Castle after Marine One landed on the castle grounds. “If the President ‘s security detail harboured any nervousness about the age of the driver, they did not betray it …” reported The Guardian. The royal Range Rover was followed by the president’s 11-car motorcade, including a mobile medical unit and the armoured presidential state car nicknamed the Beast. President Obama later joked that he had never been driven by a Duke of Edinburgh before.

The Duke has had a slew of health issues in the last decade. In 2018, he spent 10 days in the hospital undergoing hip replacement surgery, was admitted to the hospital to treat an infection in 2017 and underwent exploratory surgery due to abdominal issues in 2013.

In 2011, according to No. 41 on the Mail’s list, Prince Philip was voted Consort of the Year by The Oldie magazine – his letter of acceptance admitting that “bits are dropping off the ancient frame.” It was no doubt his desire to live up to that honour that informed a particularly dutiful moment that had an adverse on his health the following year.

In June 2012, Prince Philip and the Queen braved what the New York Times reported as “bone-chilling, rain-dampened weather … during a royal river pageant of a kind last seen 350 years ago” to celebrate the Queen’s Diamond Jubilee, or her 60 years on the throne. While younger members of the Royal Family took cover below, the paper went on to report, “The monarch, who is 86, and her husband, Prince Philip, 90, never donned coats through the hours they spent on the open deck of the royal barge as it made its way down the seven-mile course of the pageant, waving at crowds that shouted “God save the Queen” and hoisted a forest of plastic Union Jacks. Neither did they sit in the throne-like red velvet chairs set in the prow, apparently reluctant to claim a luxury not available to the onlookers.” The next day, the Prince was hospitalized with a bladder infection and was unable to attend the rest of the celebrations including the Royal Family appearance on the Buckingham Palace balcony for the fly past. Christmas 2011 found him hospitalized after an operation to clear a blocked artery.

Throughout his 73 years by the Queen’s side – they married in 1947 making it the longest royal union in history, Prince Philip has also been affected by No. 13 on the Mail’s list – “Philip is a self-confessed practitioner of ‘dontopedalogy’ – the science of opening your mouth and putting your foot in it.” This is a very gentle way of describing his serial sexist and racist remarks that made international headlines on many a royal walkabout or tour. This overshadowed his decades of good work as patron, president or member of 780 organizations including the Duke of Edinburgh’s Awards for community service for commonwealth use and World Wildlife Fund, which sparked a passion for conservation in his descendants, Prince Charles, Prince William and Prince Harry. But for many decades, he symbolized a British Royal Family out of touch as a multi-cultural society modernized around them.

But a sympathetic portrayal in The Crown, the possibly criminal misdeeds and disgrace of his third child, Prince Andrew, (which make his “gaffes,” as the British press termed them, seem quaint in comparison) and the march of time has helped solve the Prince Philip perception problem. Prince Charles has bemoaned his father’s harsh response to his “sensitivities” as a boy but in recent years, a more compassionate side of Prince Philip was revealed: letters from him to Diana during the breakdown of her marriage to Prince Charles showed an empathetic approach and by offering to walk with them, he gave William and Harry the ballast to walk behind their mother’s casket (it is reported, though, that he still cannot abide Fergie and won’t permit her under any royal roof while he is present).

So on his 99th birthday, there is an outpouring of good will toward the Duke of Edinburgh as he is remembered mostly through the nostalgic lens of the golden good looks and youthful virility that first captured the heart of the 13-year-old Elizabeth, the shy, accidental heir.

Philip was 18 and problematic even then. His high birth as the Prince of Greece and Denmark belied his reality as a destitute refugee – No. 14 on the Mail’s list “At the time of his wedding to Princess Elizabeth, he had the equivalent of 12p in the bank” – who was essentially parentless. His mother had been committed for mental illness and then joined a convent, while his father drank himself to death in the south of France while a young Philip was left to fend for himself in boarding school.

The courtiers saw him as – no surprise here – crass and vulgar, therefore unsuitable. And while he acquitted himself with honour as a naval officer during the war, his sisters were married to Nazis and, therefore, not invited to his wedding. Plus, there were suspicions regarding the dynastic ambitions of his uncle and patron, the powerful Lord Mountbatten, the last Viceroy of India – a fear that came to pass when in the ’50s, he unsuccessfully lobbied to have the name of the House of Windsor changed to the House of Mountbatten. To this the Duke, who in public had to walk two paces behind his wife, famously claimed that he was “nothing but a bloody amoeba … the only man in the country not allowed to give his name to his own children.”

The matter was righted when it was agreed that the Queen’s descendants, other than those with the style of Royal Highness or female descendants who marry, will carry the family name Mountbatten-Windsor. These include Prince Edward and Sophie Rhys-Jones’ two children and the youngest royal baby, Archie Harrison Mountbatten-Windsor, the son of Prince Harry and Meghan Markle, who turned one, last month.

As they isolate, it is said the couple will mark Prince Philip’s birthday with a “no-fuss lunch” today. All the better for the Queen to focus on the man she has described as her “strength and her stay.”