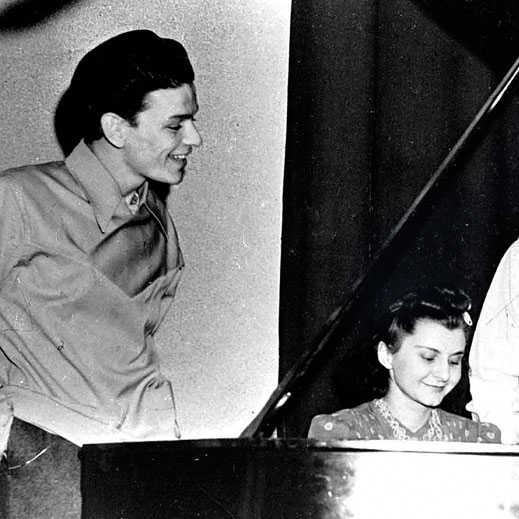 The first-ever Billboard music chart was published 80 years ago today — on July 27, 1940 — with Frank Sinatra’s “I’ll Never Smile Again,” written by Canadian Ruth Lowe, as the number one song. Here, we explore the life and legacy of the Canadian songwriter who penned two huge hits for Ol’ Blue Eyes.

In September 1940, Ruth Lowe, 26, with golden hair and a Cheshire smile, brought a guest to meet her mother and sister at her mom’s apartment in downtown Toronto. Already an accomplished pianist and songwriter, she introduced the skinny, handsome crooner whose melodic baritone gave voice to a song that, though born in the depths of her worst despair, had become the first No.1 single ever on the brand new Billboard music chart – a position it held for 12 weeks. Improbably, on the back of one mournful ballad, the daughter of a poor butcher from Toronto and the son of Italian immigrants from New Jersey were suddenly music sensations.

The first song Ruth Lowe ever wrote for Harold Cohen (no relation to Micky) consisted of two lines: “Harold, you need me/Yes, you do” on a crude recording intermingled with giggles from Ruth and band mate Sair Lee. It brims with an unbridled joy and enthusiasm that compensate for its brevity – in hindsight, a glum foretelling.

At 16, Ruth left school to become a song plugger – a pianist who played sheet music for prospective customers, be they parents buying it for their kids or seasoned performers – in a music store at the Yonge Street Arcade. She also took gigs with local radio stations and played in bands, including the female trio The Shadows, with Sair Lee and Esther Winthrop. “Everybody couldn’t believe it – a nice Jewish girl going with an all-woman band,” Micky quips. “She wrote a lot of their arrangements, too. She was there for a couple of years until she met her first husband.”

Harold Cohen of Chicago – Ruth’s first husband, perhaps even first love – was a fellow song plugger and, by all accounts, a tall, handsome, kind, well-liked gentleman. Shortly after giggling through, “Harold, you need me/Yes, you do” they married and settled down in the Windy City. A year later, in 1939, during surgery, Harold suffered kidney failure and died. Armed with a professional demo of her own song – Ruth brought it to a friend who performed with Tommy Dorsey’s orchestra. After hunkering down with songwriters Paul Mann and Stephan Weiss, Ruth delivered “Put Your Dreams Away (For Another Day)” – a song to which Sinatra once gushed, “I love you, old buddy.” Ruth travelled annually to New York’s famed Brill Building to meet with music insiders while writing songs for other acts – she and son Tom wrote the Travellers’ single “Take Your Sins to the River” – but none resonated like the Sinatra hits. Though she never again matched her success with Sinatra, Ruth did enjoy one last moment in the spotlight. In the mid-1950s, a parade of loved ones surprised her during filming of the NBC show This Is Your Life – including her young sons. Ruth clutched at her hair and quipped, “I wish I knew. I’d have had a bleach.”