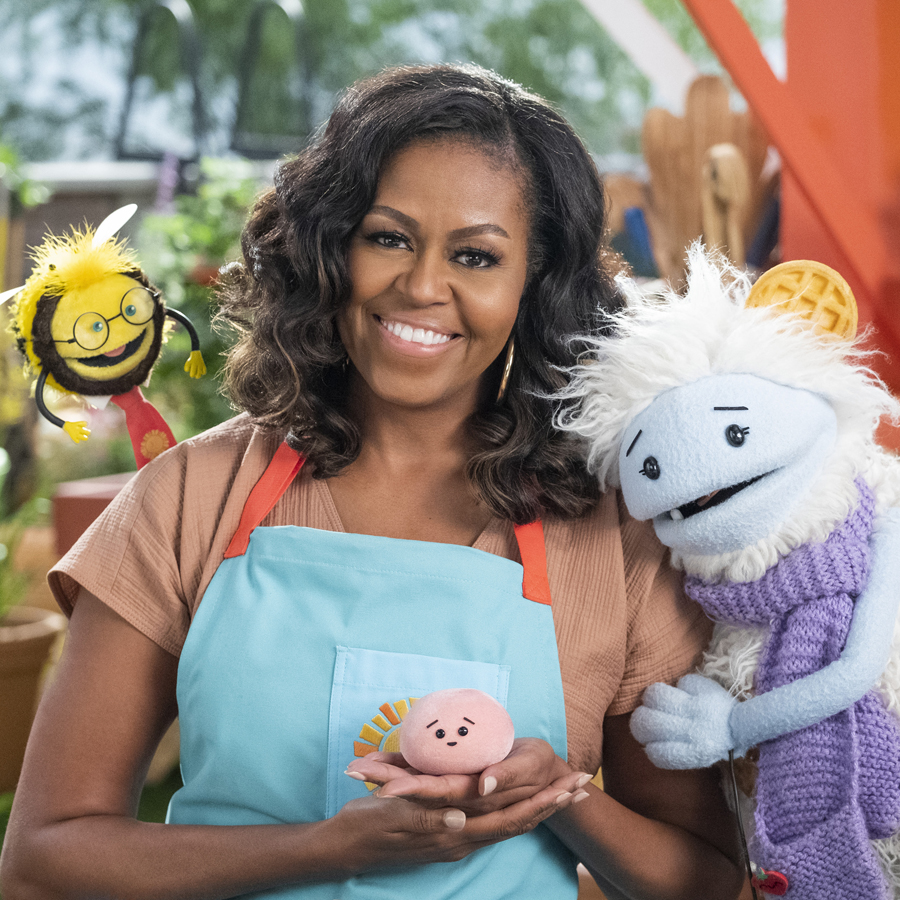 Michelle Obama is launching a new kids cooking show on Netflix with the help of some puppet friends, including, from left, Busy the Bee, Mochi and Waffles. Photo: Adam Rose / Netflix

Michelle Obama has a new job: managing a supermarket.

Yes, the former first lady, 57, is donning an apron and keeping an eye on the produce aisle — though she’s not pulling your average nine-to-five shift.

Instead, Obama’s gig is part of the new Netflix children’s cooking series Waffles + Mochi — in which she stars and also executive produces.

The series, according to a Netflix release, aims to “get kids and grown-ups cooking together in the kitchen and connecting to cultures around the globe.”

Waffles + Mochi, which launches on Mar. 16, is entered around puppet best friends, Waffles and Mochi — with the former boasting waffles for ears while the latter is shaped like a mochi,  a Japanese rice cake. The pair aspire to become chefs and take a job at their local supermarket that Michelle Obama manages. Along with Obama and a magical flying shopping cart, they “blast off on global ingredient missions, traveling to kitchens, restaurants, farms and homes all over the world, cooking up recipes with everyday ingredients alongside renowned chefs, home cooks, kids and celebrities.”

It sure sounds more exciting than any supermarket job we ever had.

Netflix adds that Obama and Co. find themselves, “picking potatoes in the Andes of Peru, sampling spices in Italy, or making Miso in Japan.”

“It’s all about good food: discovering it, cooking it, and of course, eating it,” Obama said in a Facebook post, “These two will take us on adventures all around the world to explore new ingredients and try out new recipes. Kids will love it, but I know that adults will also get plenty of laughs — and some tips for the kitchen.”

She added that, “I wish a program like this had been around when my girls were young. I also know that this is a difficult time for so many families, and I’m hopeful that this delightful show can bring a bit of light and laughter to homes around the world.”

The show also has a charitable component. As Obama explained in the Facebook post, they’re working with Partnership for a Healthier America — an organization formed alongside the former first lady’s “Let’s Move!” campaign through which Obama made it her mission “to work with folks across this country to change the way a generation of kids thinks about food and nutrition” and combat childhood obesity.

She says that Waffles + Mochi will work with Partnership for a Healthier America during the pandemic “to get fresh ingredients to families in need across the country so they can cook together at home.”

Obama’s husband, former U.S. President Barack Obama, is also listed as an executive producer on Waffles + Mochi. There’s no word, however, as to whether the 59-year-old also gets to take a ride in the magical flying shopping cart or, if Michelle Obama will use her supermarket manager clout to make him stay behind and restock the shelves.

In 2018, the couple formed their Higher Ground Productions company and signed a multi-year deal to produce content for Netflix.

Waffles + Mochi is, of course, is only Obama’s latest venture. In recent years she released a mega bestselling memoir, Becoming — which spawned a Netflix documentary — and last year launched a Spotify podcast.