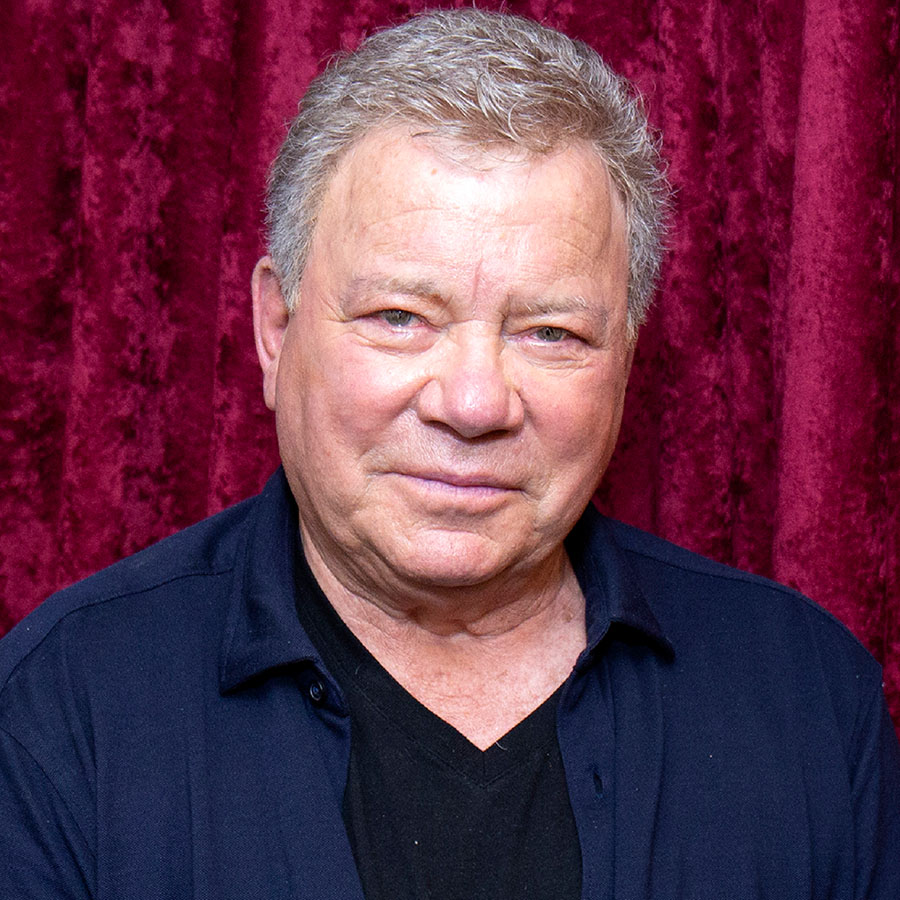 From stage to screen, 'Star Trek' to spoken word albums, Montreal-born actor William Shatner — who turns 91 on March 22 — has enjoyed countless memorable moments over the course of his career. Photo: Santiago Felipe/Getty Images

In 2011, the same year that William Shatner turned 80, he sat down with Zoomer magazine for a cover story and explained his philosophy on aging.

First: Get out of bed and don’t waste your remaining days.

Second: Always say “yes.” That’s because, as the Montreal-born actor explained, “’yes’ means ‘opportunity.’ ‘Yes’ makes the dots in your life appear. The lines you make with those dots always lead to interesting places. ‘No’ closes doors. ‘Yes’ kicks them wide open.”

Third: Don’t slow down. “At 40, you’re not looking at the end but, at 80, you are. You can see the line — it’s like the guys at marathons, who see the end and are ahead but look behind them and start slowing down before they get to the end. So you don’t want to slow down like those cocky marathon runners who are hundreds of yards ahead of everybody else.”

Now, a little more than a decade later, Shatner hasn’t slowed in the slightest. Case in point, he’s a mere five months removed from becoming the oldest person ever in space, when he soared aboard Jeff Bezos’ Blue Origin rocketship on a suborbital trip last October.

And last year, just four days after he turned 90, he starred in the film Senior Moment, playing a retired NASA pilot whose penchant for speeding his Porsche around town causes him to lose his license.

In discussing the film with Spectrum Bay News 9, Shatner was asked how it felt to turn 90.

“They say it’s only a figure. I’m here to tell you that it’s not only a figure. It’s like, ‘What? Where did that come from, the 90 years old?’” he quipped. “So what I’ve taken to doing is saying, ‘You know, they made a mistake on my [birth certificate] and I’m only 61.’ But my shoulders ­— they’re not a 61-year-old’s shoulders. But yeah, it’s remarkable. And right now you see a picture of you when you were young and you think, ‘Was that me?’ And I guess it was me.”

Of course, fans have no problem remembering Shatner in his younger years, whether from his time as Captain Kirk on Star Trek, police sergeant T.J. Hooker on the TV drama of the same name, lawyer Denny Crane on Boston Legal or any of his other countless television and film credits. And really devoted fans may even recall him from way back in the mid-1950s, when he performed at the Stratford Shakespeare Theatre Festival and played a character called “Ranger Bob” on The Canadian Howdy Doody Show.

In his 91 years, the Canuck star has, of course, found acclaim on stages and screens big and small, not to mention through his own unique brand of spoken word music. And while it’s impossible to recount it all, we’re taking a look back at seven of our favourite William Shatner moments.

Captain Kirk: A Lover and a Fighter

Shatner’s most famous role is undoubtedly as Captain Kirk on the original Star Trek series, which ran for three seasons between 1966-1969. Every fan, no doubt, has their favourite Kirk moments, but the Starship captain gained a certain level of fame — or infamy — for his often hokey fight sequences.

In the premiere episode of the second season in 1967, for example, Kirk is forced to fight his dear friend Spock “to the death.”

But perhaps the cheesiest Kirk throw down occurs in a first season episode in 1967, in which the captain takes on a member of an alien lizard species known as the Gorn in a “fight” that almost plays as a parody when you watch it back today.

Funnily enough, Shatner and the Gorn renewed their feud in 2013 in a television ad for a new Star Trek video game, though their “spoof” fighting in the commercial doesn’t look much different than the actual fight portrayed in the episode. It did, however, highlight Shatner’s ability to laugh at himself.

Of course, other classic Kirk moments include his oft-parodied “Khaaan!” scream from the 1982 film Star Trek II: The Wrath of Khan, as well as what is frequently touted as the first interracial kiss in American television history, between Captain Kirk and Uhura, played by actress Nichelle Nichols.

The Star Trek kiss took place in 1968, and many dispute it as American TV’s first interracial kiss by citing other shows, including a 1959 episode of the adventure series Sea Hunt, in which Lloyd Bridges and Japanese-Canadian actress Nobu McCarthy smooch. In addition, Shatner himself has claimed that he and Nichols never actually kissed in the scene, while Nichols claimed they did. But because of the way it’s shot, with the camera angle not allowing for a clear view, it’s up to viewers to decide who’s right.

In December 1986, Shatner served as the host of a Season 12 episode of Saturday Night Live. One of the sketches, titled “Star Trek V: The Restaurant Enterprise,” imagines the Starship Enterprise being purchased by Marriott and turned into a seafood restaurant — “Cap’n Kirk’s Lobster Shanty.” The starship crew — including Spock and Bones — act as servers, while Shatner, of course, reprises his role as Captain Kirk, the restaurant’s namesake and manager. The skit plays off popular Star Trek tropes while, in real life, the film Star Trek IV: The Voyage Home had premiered in theatres a month earlier.

William Shatner established his own unique spoken word technique that he’s employed on 10 albums since his first release, The Transformed Man, in 1968.

Hardcore fans no doubt play the albums on repeat, but to most they’re pretty much played for gags.

Shatner tends to cover classic tunes, and his rendition of Queen’s “Bohemian Rhapsody” has to be heard to be believed.

He also famously covered the Elton John classic “Rocket Man,” cigarette in hand, in a 1978 performance introduced by lyricist Bernie Taupin himself.

But perhaps the most “unbelievable” Shatner music performance is his rap — yes, rap — in the 1999 comedy film Free Enterprise, in which he plays a fictional version of himself attempting to produce a musical based on Shakespeare’s Julius Caesar. In the film, Shatner raps a song called “No Tears for Caesar” — which is made up of lines from the Bard’s script — with rapper The Rated R. And it’s exactly as (purposely) bad as you’d think.

When it comes to celebrities people enjoy doing impressions of, William Shatner ranks right up there alongside fellow Hollywood legends like Christopher Walken and Jack Nicholson.

Everyone from Seth MacFarlane to Jim Carrey does Shatner. Even Carol Burnett tried her hand at Captain Kirk on The Carol Burnett Show.

But it’s Kevin Pollack who boasts the most famous Shatner impression (which you can watch below), even capturing the attention of the Star Trek actor himself.

An honourable mention also goes to comedian and impressionist extraordinaire Frank Caliendo, who nailed Shatner in a parody of Boston Legal for Mad TV.

William Shatner has a long history of appearing in television commercials — including in ads for the online travel site Priceline.com in the 1990s. Originally he appeared alone in the ads, but the site eventually added a twist: using their commercials to reunite Shatner with his Star Trek co-star Leonard Nimoy.

You’ve Got a Face for Horror Films

Most people wouldn’t take it as a compliment if someone used their likeness as the face of a horror film villain, but that’s exactly what happened to Shatner. As many people know, the mask worn by Michael Myers in the Halloween movies — beginning with the first film in the franchise in 1978 — is actually a William Shatner mask.

So how did this come to pass? According to StarTrek.com, Rick Sternbach, a designer and illustrator on various Star Trek films and TV shows, explained it once on his Facebook page.

“I was hired as an illustrator on Halloween 2 in 1981, working for production designer J. Michael Riva. In a supply cabinet at Pumpkin Pie Productions, we had one mask left from the original Halloween, and no idea where to get any others for the sequel. It appeared that we’d need to go check out some of the toys stores and such, but I noticed that there was some wording molded into the neck area. There was a model number, and ‘Don Post Studios.’ I made a call, read off the model number, and the word came back ‘It’s our Captain Kirk mask.’ I asked if we could buy a number of them, and was told ‘We’ll give you a box, just give us credit.’ With that, I turned the official dealings over to the higher-ups. Brush with greatness.”

Below, Shatner reflects on how his likeness became the face of one of the most famous horror movie villains in history — and how he wore one himself to go trick-or-treating with family.

From One Space Canuck to Another

In March 2013, astronaut Chris Hadfield became the first Canadian ever to command the International Space Station. The Sarnia-born space man routinely went viral on social media for his posts depicting daily life in zero gravity, as well as for his renditions of tunes like Davie Bowie’s “Space Oddity.”

During the course of his tenure on the ISS, the Canadian Space Agency arranged for a chat between Hadfield and William Shatner.

As such, the Starship Enterprise captain and the ISS commander enjoyed a public discussion, in which they talked about space travel and the crossover between science fiction television shows like Star Trek and real space exploration.

“You think about the stuff that was portrayed on television 40 years ago, of people with a small hand-held device standing on the surface of a planet talking to someone effortlessly who is orbiting that planet,” Hadfield said. “That’s what you and I are doing right now.”

They also joked about the difference between making a mistake as an actor portraying a starship captain, and an actual astronaut.

“In my case,” Shatner quipped, “your face flushes and you get a sheen of flop sweat. In your case, you burn up. It’s a little different.”

“Yeah, well,” Hadfield retorted with a laugh, “in both cases you go down in flames.”

Ahead of Shatner’s own space flight in 2021, Hadfield advised Shatner to “boldly go” (paraphrasing Captain Kirk) and “soak it up.”

In an emotional interview after returning to Earth following the space flight, Shatner declared of the experience: “It was unbelievable.”

Star Trek Day: 15 Out-of-This-World Facts About the Show on Its 54th Anniversary