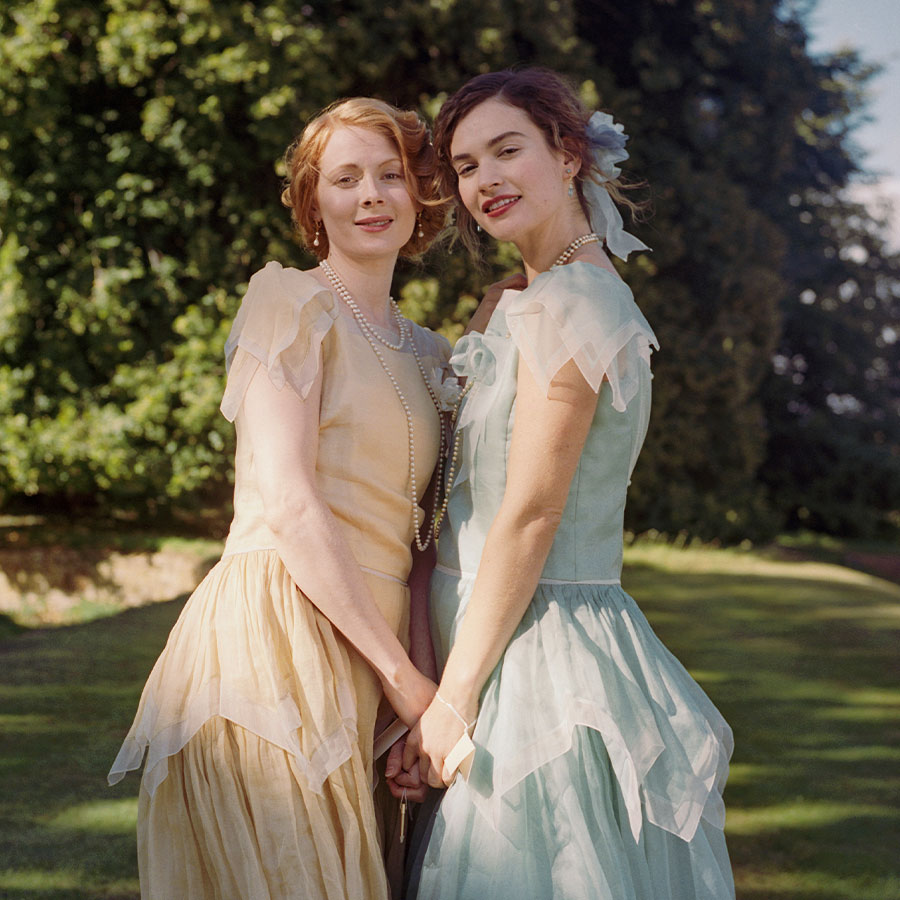 Emily Beecham and Lily James, above, star in 'The Pursuit of Love,' a three-part series based on Nancy Mitford's 1945 novel. The series proved a hit in the U.K. when it aired in the spring, and it debuts in North America on July 30. Photo: Courtesy of Amazon Studios

Period dramas from The Crown to The Queen’s Gambit have proven essential pandemic viewing, with Bridgerton becoming perhaps the biggest breakout hit of the COVID-era. But as fans eagerly await Season 2 of the Regency England-era drama, the three-part series The Pursuit of Love — a romantic dramedy about love and friendship set in Europe between the two world wars that captivated BBC viewers when it aired across the pond this past spring — finally launches in North America on Prime Video on July 30.

Adapted and directed by actress Emily Mortimer, the entertaining coming-of-age tale is based on Nancy Mitford’s 1945 novel — the first in her highly autobiographical trilogy about a dysfunctional upper-class family. The story follows Linda Radlett (Lily James, of Mamma Mia!, Downton Abbey and Cinderella) and her cousin Fanny (a breakout performance from Emily Beacham) as they grow up, marry and become mothers while their paths in life diverge as Europe slowly descends into war.

And while this modern romp may not please Mitford purists, here are five reasons why the pleasures of The Pursuit of Love will fill the Bridgerton-shaped hole in your heart this summer.

The Pursuit of Love is a Modern Sense and Sensibility

Melodramatic Linda (“‘a wild and nervous creature full of passion and longing”) aches for an exciting escape from sheltered country life. Her ensuing escapades are wryly narrated from the perspective of her admiring but pragmatic cousin Fanny. The series centres their longtime relationship but, like Bridgerton, employs a contemporary lens to emphasize social themes like the weight of expectations on women and the consequences of bucking conventions.

The aesthetic of the historic template also gets a twist, beginning with the opening strains of The Who’s “The Blue Red and Grey” as Linda sunbathes naked on the terrace of her Chelsea flat. In the manner of Sofia Coppola’s Marie Antoinette — and also recently taken up by costume dramas like Emma, Dickinson, and The Great — the score combines classical music with anachronistic soundtrack selections by Marianne Faithful, New Order, and Le Tigre.

Swap Bridgerton’s stylized wisteria-dripping Georgian mansions and ballroom set pieces for flocked velvet wallpapers, tables laden with cream teas and earthy country living and you’re smack in the middle of The Pursuit of Love. Production designer Cristina Casali recreates the distinct interiors of the everyday aristocracy with texture and chintz. You’ll also find yourself longing for a huge attic linen cupboard (the headquarters of the girls’ secret club, the Hons Society). Most of the stately home parlours and drawing rooms were constructs, but the show filmed at many exteriors of heritage properties around the country. Principal among them is Alconleigh, the “large, ugly, north-facing house in Oxfordshire” that is the ancestral home of the Radletts, an amalgamation of real-life Dyrham Park and Rousham House.

Faringdon House, the famous estate of the Radletts’ wealthy and eccentric neighbour, Lord Merlin (in the series, it’s filmed at Badminton House in Gloucestershire) was immortalized by Mitford after being the site of glorious (and notorious) madcap weekend parties populated by friends such as H.G. Wells, Igor Stravinsky, Gertrude Stein, and Salvador Dali. Later, Linda bathes in a grand Art Deco bathroom the size of a drawing room, and when the story moves to France there’s an airy Parisian apartment — and lunch at The Ritz.

Now forever known as the “Hot Priest” from Fleabag (and before that, villain Moriarty on BBC’s Sherlock), Irish actor Andrew Scott plays Lord Merlin in The Pursuit of Love. We’d gladly watch a whole episode of Scott (in polka-dot pajamas!) dancing to T. Rex’s “Dandy in the Underworld” as he and his entourage crash a party at Alconleigh.

However, viewers will also find an element of curiosity in the behind-the-scenes intrigue stemming from actor Dominic West’s casting as Linda’s tyrannical and xenophobic father Matthew (a man who loathes educated females). That’s because The Pursuit of Love is the production on which the married West, 52, and Lily James, 32 were working when they were reportedly photographed smooching last October. Affair rumours ran rampant — though, once the show aired, some fans were put off the idea of any romantic link after seeing the pair play father and daughter. That same month, however, West and his wife, landscape designer Catherine FitzGerald, smooched in public and placed a sign in front of their home for the press that read: “Our marriage is strong and we’re very much still together. Thank you. Catherine and Dominic.”

It’s Fun Looking Up the Who’s Who

Just as watching The Crown, Downton Abbey, and Bridgerton had us scouring the internet for the real histories behind the fictionalized events, this roman à clef also leads fans down entertaining rabbit holes. Dame Judi Dench, for example, starred as Lady Alconleigh in the acclaimed 1980 television series adaptation of the novel and its first sequel, Love in a Cold Climate, and, in the previous BBC version released 20 years ago, Rosamund Pike (Gone Girl) also earned kudos for her turn as sensible cousin Fanny.

Meanwhile, Lord Merlin, who takes Linda under his exceedingly camp wing, is based on the real-life composer, painter, and bon vivant Lord Berners (aka Gerald Tyrwhitt), who dyed his doves turquoise, pink, and gold. The character is also inspired in part by British fashion photographer and costume designer Cecil Beaton (which is how they justified having Scott wear hot pants, as Beaton once did). In addition, Fabrice De Sauveterre (played by Assaad Bouab), is reportedly based on French diplomat Gaston Palewski, Mitford’s real-life romantic partner. As well, in this adaptation, showrunner Mortimer herself plays Fanny’s exotic and outrageously wayward mother, called The Bolter, a character based on the scandalous real life of so-called ‘maneater’ Idina Sackville.

The Costumes: Chiffon and Headpieces and Cardigans, Oh My!

The mix is masterminded by costume designer Sinéad Kidao (who was the costume assistant on the Academy Award-winning Little Women and Anna Karenina). With her eye, the signature drab country tweeds, culottes, and frumpy homemade knitwear of the impoverished landed gentry, for example, are chic. And there is all-out glamour, like the angular chic black and white couture wardrobe of a kept woman in 1930s Paris. And many pieces of  jewellery throughout — including Linda’s extravagant pearl and ruby necklace and her diamond and pearl wedding tiara and demi-parure — are real, on loan from the Bulgari archives.

They may not be eye-popping Regency gowns but, as viewers plan outfits to re-enter society, every scene has wardrobe goals.

The Crown Continues Its Reign, Oprah’s Harry and Meghan Interview Gets a Nod and Other Takeaways From the 2021 Emmy Nominations