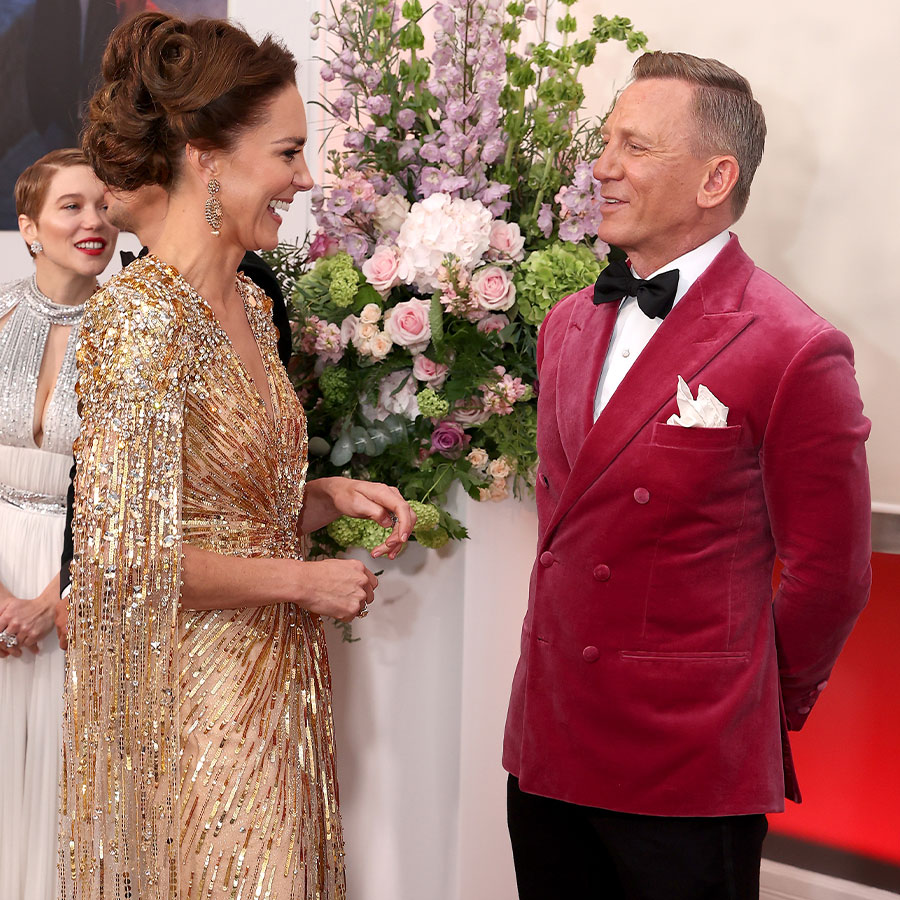 The big royal guns were blazing for the world premiere of James Bond: No Time To Die at Royal Albert Hall tonight. In a troubled Britain currently rocked by gas shortages and Brexit backlash and roiled by the disturbing Prince Andrew news stories, plus resentment of Harry and Meghan setting up a satellite royal diplomatic effort in New York over the weekend, the movie event drew a very rare Number One and Two in the line of succession: tuxedo-clad Prince Charles and Prince William with their wives.

But it was the Duchess of Cambridge who upped the star wattage to celestial levels. The glittering, golden metallic gown she chose — which was designed by Jenny Packham for the Bond film franchise’s famous femme fatales in a special collaboration collection with EON Productions  — was sleeker and bolder than anything we have seen from Catherine to date.

.It is a caped gown, with a cinched waist, and it is fit for a queen-to-be. The updo alone is worth a thousand words: with volume and fullness, the look brings to mind international regal style masters such as Queen Rania of Jordan.

This is Catherine on the verge of 40, and it is Fashion, with a capital F, underlined.

Plus, what better accessory could a lady have than James Bond? Daniel Craig, in his final outing as the iconic British spy, can often appear taciturn in public. Tonight, he was positively beaming at the royal attention. According to Twitter, Craig told Kate: “You look jolly tonight.” A wealth of British understatement right there. Phoebe Waller-Bridge, star of the BBC situation comedy series Fleabag, and who worked on the film screenplay, was herself resplendent in an Azzaro Couture ensemble and apparently was able to utter only “Wow” on seeing the duchess.

The internet was quick to point out that William’s mother, Diana, once wowed in a similar style of metallic (silver) gown, by Bruce Oldfield at a James Bond premier herself, for 1985’s A View to a Kill, which was Roger Moore’s own swan song as the legendary character.

Camilla, Duchess of Cornwall, also looked terrific — coincidentally wearing Bruce Oldfield herself. Camilla is always appropriately dressed for every occasion, but she rarely goes for a “fashion” look. The 74-year-old consort to the Prince of Wales chose a pale blue column gown with silver sparkles that set off her silver hair elegantly.

Prince Charles supports the film industry as patron of the British Film Institute, while Prince William is President of BAFTA, the British film and television academy.

Also in attendance were health-care workers, chosen in thanks for their pandemic service, as well as members of Britain’s armed forces. Other celebrities in attendance included the movie’s other stars Rami Malek (the Bond villain), Lea Seydoux (the love interest), Ana de Armas (the Bond girl), Naomie Harris who plays Miss Moneypenny, and Lashana Lynch, famous as the first female 00 agent in the franchise. Billie Eilish, the 19-year-old pop star who co-wrote and performs the Bond theme song,  was visibly shy on meeting Kate outside the theatre.

The Queen herself has a long history with the 007 franchise, and with Daniel Craig himself. Craig famously “escorted” Her Majesty into the opening ceremonies of London’s 2012 Olympic Games, rappelling down with her from a helicopter (thanks to a little movie magic and sleight of hand). The clip, which lives now on YouTube, is a modern classic, showcasing the Queen’s dry wit and pluck. Similar to a certain Mr. Bond.