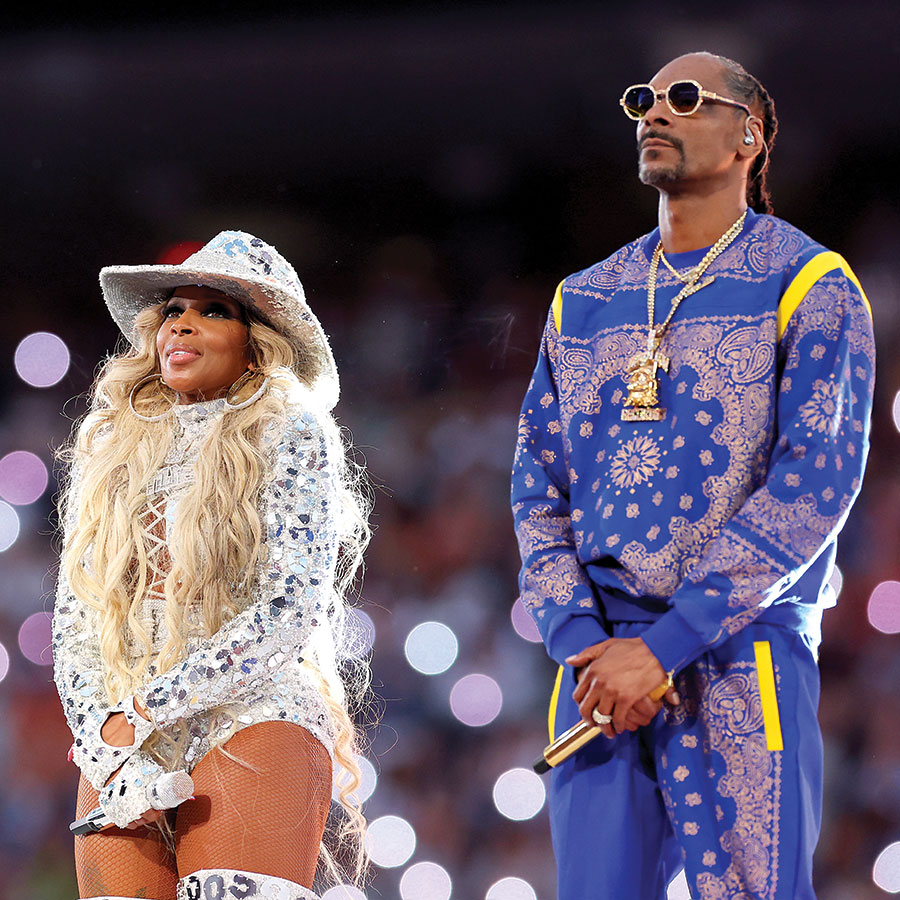 It was well into Dr. Dre’s blistering Super Bowl LVI halftime show set when surprise guest 50 Cent launched into his Dre produced 2003 banger “In Da Club,” while hanging upside down from an exercise bar – just as he had done in the song’s video.

But this time, 19 years later, 50 Cent kept his tank top on. Twitter was quick to pounce on the 46-year-old rapper’s fuller physique, with many pointing out that, in their opinion, he had it coming as payback for his recent body shaming via social media of Madonna, 63, another Super Bowl halftime performer (XLV1, 2012) who gets a lot of attention about how time and surgical interventions have weathered her — or not.

50 Cent was not the youngest of the hip hop luminaries who joined Dre, 56, on stage on Sunday. That was Kendrick Lamar, the Pulitzer-prize winning hip hop icon in the making who performed “Alright, “ a song associated with the Black Lives Matter movement.

At 34, Lamar brought generational diversity to the show as ’90s era legends Snoop Dogg (50), Mary, J. Blige (51) and Eminem (49), nailed the performances of their Dre-helmed classics, proving they “still got it.”

One couldn’t help but think of another Dre protégé, Tupac Shakur, who was gunned down in 1996, when OG Snoop rapped the slain rapper’s classic hit, “California Loving.” And when Eminem, who performed the 2002 Oscar-winning “Lose Yourself,” took a knee to acknowledge Colin Kaepernick, the Black quarterback who was pushed out of the NFL for his racial justice protests, it was to the sound of Dre poignantly playing Tupac’s “I Ain’t Mad at Cha.”

It was only fitting that Dre, a Los Angeles native known as the godfather of West Coast rap (who came to prominence with the seminal ’80s group N.W.A. and, in 2014, sold his Beats by Dre audio company to Apple for US$3 billion), should headline the hometown event, which had its Hollywood ending when the L.A. Rams triumphed over the Cincinnati Bengals, 23 to 20.

But it was a Hollywood moment for rap too, a coming of age for a genre that is in its infancy compared to boomer rock ‘n‘ roll and anodyne teenage pop. Rap has been discriminated against for being too “street” and “urban” and feared and maligned for its truth-telling and activism. And here, for the first time ever on one of the world’s biggest stages, was some of its most iconic purveyors laying down a full rap show, with everyone, including the infamously conservative NFL, apparently vibing along.

But if one removes the rose-coloured sunglasses, there is more to see. Just like the hiring of the East Coast rap mogul Jay-Z in the wake of the league’s ham-fisted handling of the BLM movement (and particularly the Kaepernick matter) to produce halftime shows and start a social justice movement, was it a matter of optics?

That Black female Janet Jackson’s career was the sacrificial lamb after blue-eyed soulster Justin Timberlake actually executed the wardrobe malfunction during the SuperBowl XXXV111 2004 halftime show — to a shocked, shocked nation who had never before seen a nipple for 10 seconds — still rankles, especially after a recent documentary on the diva’s triumphs and travails. (For years now Black Twitter has dubbed Super Bowl Sunday “Janet Jackson Appreciation Day.”)

And just before kickoff, in the balmy 80-degree weather at SoFi Stadium, U.S. President Joe Biden called out the NFL for its lack of front-office diversity, especially in light of the racial makeup of its players, in the light of a recent class action lawsuit by one of its former Black coaches, Brian Flores, against the league and its 32 franchises, citing racial discrimination .

As Snoop rapped,“ California knows how to party. ” But when “Queen of Hip-Hop Soul” Mary J. Blige, in a viral moment, threw herself to the floor in all her ghetto-fabulous finery after her impassioned singing of her iconic lyrics “don’t need no hateration,” and “No More Drama,” the only possible response was: “We feel you girl!.”