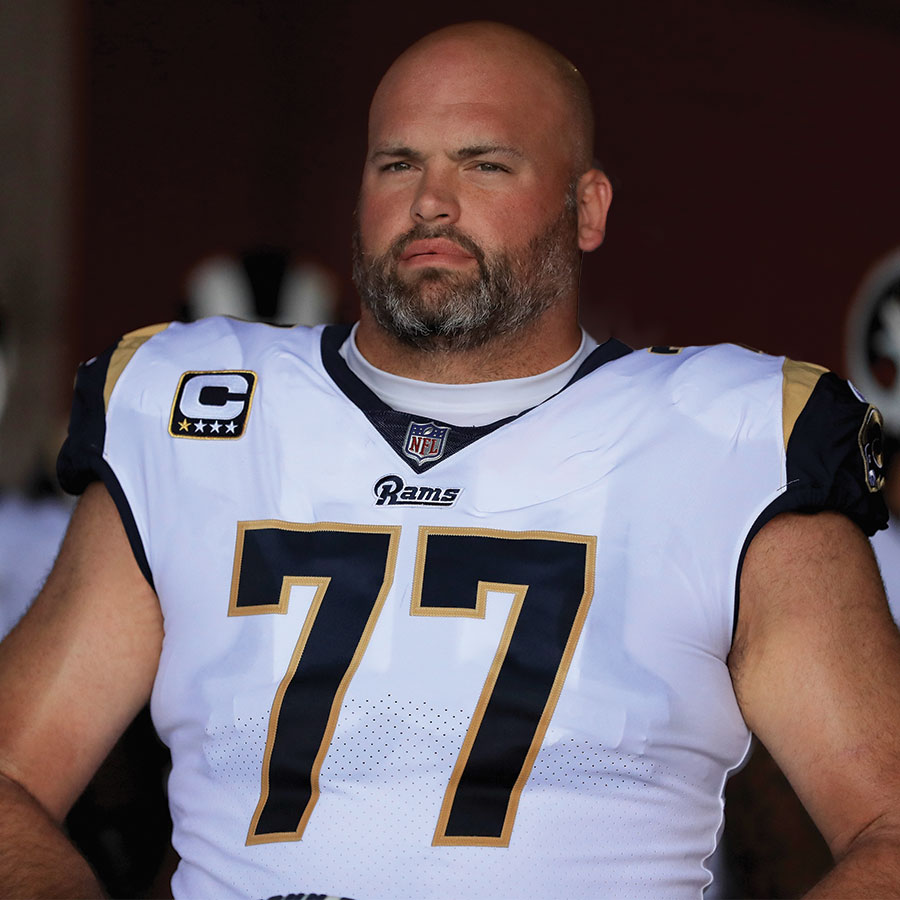 Andrew Whitworth #77 of the Los Angeles Rams looks on prior to a game against the Indianapolis Colts at Los Angeles Memorial Coliseum on September 10, 2017 in Los Angeles. Photo: Sean M. Haffey/Getty Images

One player we’ll be keeping an eye on in this Sunday’s Super Bowl match-up between the L.A. Rams and the Cincinnati Bengals is offensive lineman Andrew Whitworth.

Raise your hands those of you who ever have heard of Whitworth before now?

You’re probably not alone. That’s because the 40-year-old starting left tackle for the Rams has played much of his long career in obscurity. He’s had a very good, but largely unheralded, career far away from the limelight.

But no one can escape the Super Bowl’s media glare. So with the much ballyhooed retirement of Tom Brady from professional football earlier this month, it seems everyone has finally noticed that Whitworth has  assumed TB12’s mantle as the oldest player in the NFL.

“You know, the reality is – yes, it’s pretty cool,” was how Whitworth rather lamely described his new-found celebrity at being the NFL’s new elder statesman to reporters as he prepares to take the field in this Sunday’s big game.

Sean McVay, who is Whitworth’s coach despite being four years his junior, seems far more impressed by his lineman’s longevity. “It’s the damnedest thing ever that this guy’s still doing it at the age of 40,” McVay told reporters at the Super Bowl media sessions. “It’s awesome.”

Battle of the Ages: Brady vs. Whitworth

A lot of people have started comparing these two football-playing Methuselahs to see if they share any traits that have helped spur their amazingly long careers.

But other than maintaining a passion for football and avoiding career-ending injuries along the way — Brady and Whitworth actually have very little in common, either from an athletic or personality standpoint.

Brady has parlayed his lengthy career into becoming a huge celebrity with a supermodel wife and a healthy bank balance. Whitworth, who doesn’t even have a social media account, has drawn little fanfare during his career except among the football cognoscenti.

But by far the biggest contrast between the two (other than Whitworth’s grey beard) is that they play such drastically different positions. During his career, Brady was a quarterback, while Whitworth suited up as an offensive lineman.

For non-football fans, an offensive lineman is like a plodding workhorse. He and his fellow behemoths do all the hard work and heavy lifting that actually wins football games. And they’re mostly content to leave the glory to the quarterbacks.

This position is also the most physically demanding in football. Whether it’s clearing a path for the running back or putting up a protective wall around his quarterback, “Big Whit” spends the entire game in the trenches, pushing back against big, fast, strong and ferocious defenders who hit really, really hard.

Whitworth Did It the Hard Way

In fact, because Whitworth has played extremely well for so long at this ultra-demanding position, his longevity mark might even more impressive than Brady’s. Because if you look at the eight NFL players over 40 who have played in the Super Bowl, you’ll see a lot of kickers, punters and some quarterbacks. You won’t, however, see many offensive linemen on that list.

Even more extraordinary, is the bewildering fact that Whitworth doesn’t rely on painkillers — a staple among almost all NFL players — to get him through the long, gruelling season.

In a recent interview with SI.com (headlined “Father Timeless”), Whitworth believes in what he calls “body adaptation, this idea, grounded in personal experience rather than science, that thousands of snaps forced his pain tolerance to keep pace with his pain suffered. He stopped taking any medication, even over-the-counter pain relievers, back around 2013.”

“I’ve never heard of an NFL player not taking pain medicine,” Joe Thomas, a former lineman, says in this feature about Whitworth that appeared on The Ringer.

Of course, the most glaring difference between Brady and Whitworth is winning. Over Brady’s 22-year career, he’s won seven Super Bowls. Big Whit hasn’t won any, a 15-year drought that he hopes to end on Sunday.

He was asked by a reporter that if he wins the Super Bow, whether that will be his last game? “If it is it, man, it would be one heckuva way to end it,” he said.

We’ll have to wait until Sunday night to see if he fulfills that dream ending. Until then, let’s learn a little bit more about Andrew Whitworth has managed to survive his incredible NFL journey in his own words.

Improving with age: “I would argue I’m, like, 10 times the athlete I was when I came into the NFL”  (SI.com)

Ability to change with the times: “All throughout my career, I was always finding a way to find a new version of myself, or reinvent myself to how the game changed a bunch from the moment I got in it to where it is now. It’s almost a complete different football game” (New York Post)

Why he gave US$250,000 to an L.A. food bank: “When I can make them appreciate that someone cares about them, when I can just let them feel more confident in themselves because of something I’m able to do. I feel that same feeling” (CNN.com)

On what a Super Bowl victory would mean: “Honestly, if I do retire, it’s gonna be one of the greatest moments I’ve ever had in my life, the last game I ever play, which I don’t know how you could ever draw it up better” (New York Post)