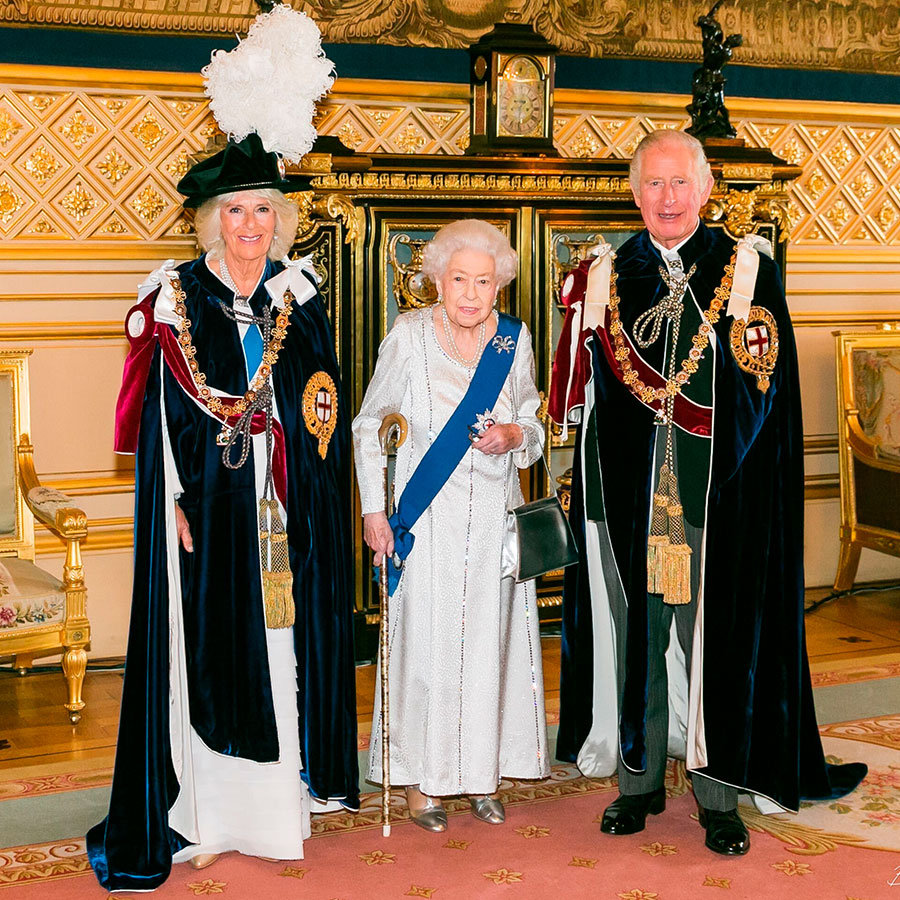 This photo issued by Buckingham Palace, shows Queen Elizabeth II, Prince Charles and Camilla, Duchess of Cornwall at Windsor Castle ahead of the Order of the Garter service on Monday. Photo: Steve Solomons/Buckingham Palace via AP/Canadian Press

The Queen used a walking stick as she led royals at Monday’s Order of the Garter service after Prince Andrew was reportedly banished from the ceremony in an eleventh-hour decision.

Her Majesty’s second son, the Duke of York, 62, had been due to appear with other royals in their traditional velvet robes and plumed hats for the annual parade from Windsor Castle to St George’s Chapel.

But it has been widely reported senior royals feared a “backlash” over his presence and lobbied the Queen for a change of plan.

There were reports the Duke of Cambridge, Prince William, 39, had told the Queen, 96, he would pull out of the Order of the Garter ceremony if his uncle Prince Andrew was given a public role.

It comes after the Daily Telegraph reported the shamed Duke, said to be the monarch’s favourite son, has been pushing her for a return to royal duties and wants the Colonelcy of the Grenadier Guards returned to him.

A source told The Sun Prince Andrew was told to stay out of sight “for his own good” following the tense family talks.

A source close to the Duke was said to have insisted it was his own “personal decision” not to appear in public.

But Buckingham Palace rejected the claim, describing it as a “family decision”.

Prince Andrew was forced to pull out of the service of thanksgiving at St Paul’s Cathedral during the Queen’s Platinum Jubilee celebrations earlier this month to celebrate the monarch’s record 70-year reign, after he said he tested positive for coronavirus.

He was said to have still joined the Queen and rest of his family for the investiture in the castle’s Garter throne room and the traditional lunch that takes place afterwards in the Waterloo Chamber.

Prince Andrew is said to have asked his mother to return his patronages and HRH title just five months after he was stripped of them.

He lost his honours as he was hammered with criticism for paying up to £12 million earlier this year to settle the civil sexual assault case brought against him in the US by one of pedophile Jeffrey Epstein’s trafficking victims, Virginia Giuffre, 38.

A source told The Sun: “He was confident and bullish he can make a comeback.”

The Queen has previously signalled her support for Prince Andrew by arriving with him for the Duke of Edinburgh’s memorial service in March, with the shamed royal providing the monarchy a steady arm as she walked into Westminster Abbey to remember the life of her husband, a few weeks after Prince Andrew reached the out-of-court settlement with Giuffre.

Monday’s ceremony is one of the most colourful events in the royal calendar.

New appointments are announced on St George’s Day, but chivalric and installation ceremonies take place every year on the Monday of Royal Ascot week, known as Garter Day.

It has not been held since 2019 due to the pandemic, and royal fans gathered to see the royal family make the walk from the castle’s Quadrangle downhill to the chapel.

The ceremony also saw Camilla installed as a Royal Lady of the Order of the Garter.

Her Majesty was pictured with the Prince of Wales, 73, and his wife the Duchess of Cornwall, Camilla, 74, with the monarch dressed in a silver-white gown and her blue Garter sash.

After suffering “episodic mobility problems”, she also held a walking stick, made of light wood with a metal clasp and a smooth marble handle, which was believed to have been a gift from the Armed Forces as part of her Jubilee celebrations.

The Duchess of Cambridge, Kate Middleton, 40, beamed as she joined the ceremony, wearing a stunning £8,400 G. Collins Sons tanzanite pendant necklace, which she accessorized with £6,100 earrings.

The Queen in Zoomer: Revisiting Her Majesty’s 6 Royal Covers for Her Platinum Jubilee