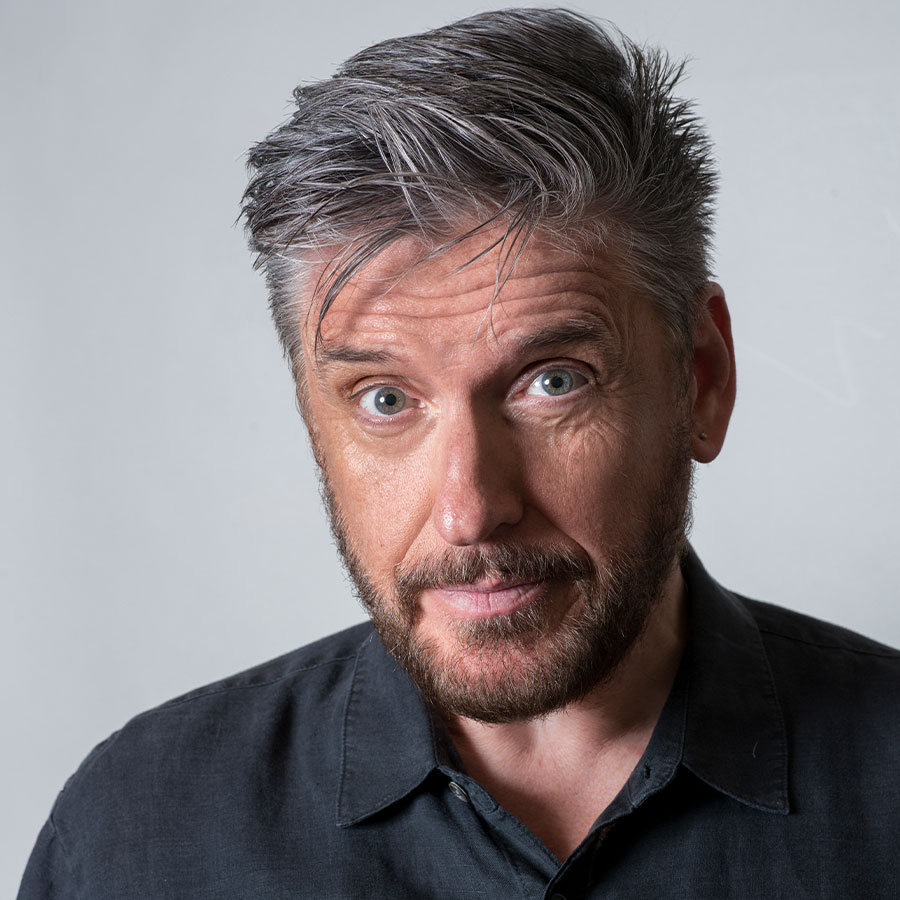 Comedian Craig Ferguson wraps the Canadian leg of his The Fancy Rascal Tour this weekend with two shows in Toronto as part of the Just for Laughs festival. Photo: Jonathan Wenk/Netflix

You may know comedian Craig Ferguson from his nine year stint as host of The Late Late Show with Craig Ferguson, his turn as office boss Nigel Wick on The Drew Carey Show,  his Emmy-winning run as host of Celebrity Name Game, or any of his books or comedy albums. But now, the 60-year-old is back on tour doing the thing he loves most: stand-up comedy.

His first tour since the pandemic, The Fancy Rascal Tour, is making its way across North America, wrapping its Canadian leg with two shows in Toronto this weekend — part of the Just For Laughs Toronto festival that runs until Oct. 1.

Arriving in Niagara Falls earlier this week — five weeks into The Fancy Rascal Tour with four more weeks of performances to go — Ferguson says that, while on tour, he focuses less on hitting every tourist site and more on catching up with friends and family who want to see him (“I don’t think I’m ever going to be so jaded that I don’t want to take a half an hour walk and look at Niagara Falls … but I don’t feel like I have to get on the Maid of the Mist and buy the t-shirt anymore,” he says).

The comedian recently spoke with Zoomer about his life of comedy and what he’s learned from following his passions.

SHERLYN ASSAM: Looking over the history of your work — from your late night show to work on comedy series’ and of course, your stand-up — how do you prepare to take on these various comedic roles?

CRAIG FERGUSON:  For me, the spine of everything and what I’ve always done from the very beginning is stand-up. I started doing stand-up when I was in my early 20s. Everything kind of comes from that. Any offers I got to be an actor or host shows or direct things or produce things or write things — it all came from that one thing.

As far as preparation, it really is a job-to-job basis. With the stand-up, I’ll write down a bunch of different things that I’m going to talk about in the act. I have a writer, who is my buddy, called Joe Bolter, in California. He was in the front-end of the horse [costume] on the old late night shows — that’s how long I’ve known Joe. He and I work together and he helped me do bits and pieces.

SA: What’s the allure of live comedy for you?

CF: I came at it from the point of view of a musician. I was a drummer in bands and because the punk rock scene was so vibrant and had a lot of different styles of performance, I got into it from that. I approach it the way a musician approaches performance, which is: “This is my instrument, I like to play it.”

All the other things that you do like acting or directing — that’s like being in a band. But stand-up is playing on your own. It’s just you and the piano, or you and the guitar. It feels to me like a very pure form of that kind of creative expression that I like and I feel comfortable with.

SA:  How has your comedy, or the nature of your jokes, changed over the course of the decades you’ve been performing?

CF: Oh, yeah, it changes all the time. One of the curses and the gift is if you’re a musician, you can write a song at 18 years old and still be playing it when you’re 60 years old. You know, if you’re Mick Jagger, you can write “Satisfaction” with your buddy Keith (Richards) when you’re both 20 and still be playing it when you’re 70 years old, and people still want to hear it. But nobody wants to hear material that you wrote 40 years ago. So you know, things change and life changes and that’s part of the game. That’s okay. That’s totally normal. I think you sign up for that when you do the kind of thing I do.

SA: One of your popular jokes is about how you can only really make jokes about Canadians  and Nazis because that territory has free reign. I’m wondering if there’s a little bit of truth to that in your writing. Are you more conscious of the types of jokes you make about certain groups or do you just go where the wind takes you?

CF: You read the room and you read the times. It is what it is. One of the things I like about doing comedy the way I do – even the way I did late night — is that I kind of exist in my own bubble. I do what I do. I don’t have a manifesto for anyone else’s method or anything. It’s just that I take every show, every sentence, every word, on a case-by-case basis. And I always have, I think. That’s the way I play the instrument.

SA: I think that could offer some escape for audiences too. Who or what kind of entertainment do you turn to for that escape?

CF: Well, you know, it’s quite interesting because obviously, you would think that maybe a comedian was listening to comedy, but I kind of don’t. I listen to a lot of music obviously, because I get a lot from it. But my entertainment tends to be documentary or philosophical in its mood. Right now, I’m listening to a lot of audiobooks (by) Christian apologists like C.S. Lewis and G.K. Chesterton because I’m quite into it. I’m interested in that right now. Next week it might be a fishing podcast or something, I don’t know. My interests are eclectic and diverse and that’s just mine. It doesn’t have to be everybody’s, that’s just the way I am.

SA: About your departure from your late night show, I read that it was getting more overwhelming for you – to the point that you wanted to leave and try these different projects that line up with your different interests. I’m wondering if it was difficult to come to that decision and if you have any advice for someone possibly teetering on the edge of a similar decision — to stay or to go when dealing with work that’s bringing success and money, but may be taking a mental toll or isn’t the best for your creative self?

CF: It’s funny, the decision I made to leave the show eight years ago took a long time to make. I mean, I was ready to go after eight years really, but I stayed on a little bit longer. It’s difficult to leave something if everyone else thinks that you should be doing it. And nobody believes that you’re leaving because you want to leave. They all think there’s some ulterior motive.

Like everything else: whatever joke you tell, whatever music you play, whatever art you create, whatever anything you do — it kind of has to be personal or it just won’t make sense to you. I don’t like to think of myself as someone who can give advice to anyone but I know that I usually regret not doing something rather than doing it. That’s kind of where I usually end up, but I try not to be too impetuous, because, you know, I got bills to pay like everyone else.

SA: In terms of what’s next for you, once you’ve reached a certain level of success is it challenging to set new goals or look for what’s around the corner?

And yes, I am thinking about doing a podcast, and I am talking to some people about it, but it won’t be every day. I have an idea for a specific kind of flavour or type of podcast I want to do and I’ll probably start it in the new year.

This interview has been edited for length and clarity.