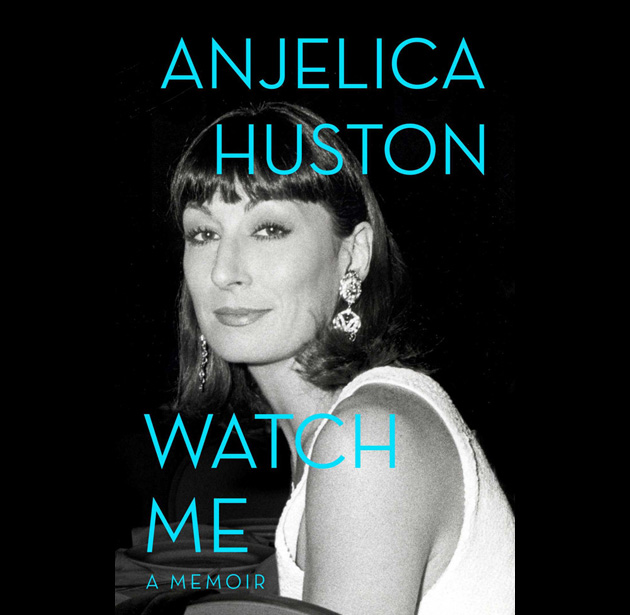 Here, five things about Anjelica Huston from her just published memoir, Watch Me

The 63-year old scion of the acting/directing Huston family has always been admirable for her dignity, elegance and forbearance in coping with two of the most powerful and difficult men in moviedom: her father John Huston and her former long term partner, Jack Nicholson.

Watch Me tells us that coping was a lot harder than she made it look. It’s also a story of how she came to believe in herself and her talent. Most of all, it’s a delicious read, with vivid behind-the-scenes anecdotes and glorious gossip, all written in high style. And who would expect anything less from Ms. Huston?

1. “At Cannes with Jack in 1974, “even though Jack and I were by now a couple, pretty French girls would come up on motorbikes and say, ‘Oh, Jack, you want to ride on my bike with me?’ And he’d get on the bike and leave me standing on the sidewalk. Finally, I would just retire to our hotel room in tears.”

2. She left Nicholson temporarily for an affair with Ryan O’Neal but realized “… there was something distinctly perverse about the O’Neal household … even though my pride was hurt, there was a modicum of relief when I found out Ryan was sleeping with another girl … soon he was telling me about unfinished business with Ursula Andress and confessing to phone calls with Bianca Jagger; I was holding on longer than I should have … Jack and I were on and off and Ryan had a bad temper.”

3. Huston was arrested at Nicholson’s house along with Roman Polanski the night after he’d spent there with a 13-year old girl. Cops who’d come to investigate found grass in Huston’s drawer and cocaine in her purse. She wore the lynx coat Nicholson had given her to the police station and was released on bail. Polanski was convicted of sexual assault and fled the country.

4. “Poor little you,” director British director Tony Richardson once said to her in the early 1980s. “So much talent and so little to show for it. You’re never going to do anything with your life.”

5. When her agent went on speaker phone to try to negotiate a higher fee for Huston for Prizzi’s Honor, Huston heard the production guy say, “You must be kidding … We’d like nothing better than to see her dropped from the film. She has no talent. Her boyfriend (Nicholson) is the star and her father is the director, that’s the only reason we are even having this conversation.”

Huston writes, “… listening to this man rant made my eyes prickle and my heart beat with indignation. But I also vowed silently that when the movie came out, he would eat his words.”
Prizzi’s Honor was nominated for eight Academy Awards, including Best Actor (Nicholson), best Director (John Huston), Best Picture and Best Supporting Actress (Anjelica Huston); she was the only who walked away with an Oscar.