New Revelations: Edward, the Nazis, Wallis Simpson and Her Linens 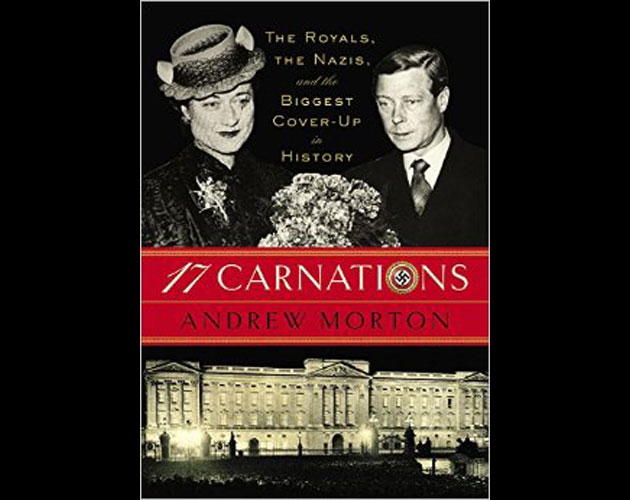 Nazi Foreign Minister Joachim von Ribbentrop regularly sent Wallis, Duchess of Windsor, bouquets of carnations – 17 to be exact – rumoured to signify the number of times the two were intimate.

The odd-numbered blooms serve as the title of a new book by Andrew Morton.

17 Carnations: The Royals, the Nazis and the Biggest Cover-Up in History reveals the attempt by authorities at the highest international levels to conceal “the Windsor file” – microfilm of incendiary German documents discovered in a hidden metal canister.

The damning documents detail the extent of the Duke of Windsor’s collaboration with Hitler and their plan to put the Duke back on the throne as a puppet king after Germany won the war.

But, says Morton, the tawdry story was kept secret.

“The cover-up worked beautifully, from the Prime Minister downwards,” says Morton. “We had just won the war and, more than that, the full horror of the Third Reich was unfolding before everyone’s eyes.

“There was so much revulsion against the the Nazis that no one wanted to hear that Edward was part of a process trying to negotiate with Churchill at a time of Britain’s greatest peril.”

The documents show that the former King would have accepted the throne from the Germans as revenge (for his family cutting him off),” says Morton. “The Germans knew they could do business with (him). He spent 12 days touring the country with Goebbels and Goring.”

The extent of the international whitewash of the “Windsor file” is startling.

“It’s a compelling narrative about this incredible cover-up and preservation of the monarchy not just by the British, but by Eisenhower,” says the author.

The best-selling author of Diana: Her True Story and confidante of the Princess of Wales details not only the possible treasonous behaviour of the Duke and Duchess but also their stunning narcissism. Evidently, one of Wallis’ great worries as Europe was being decimated by the Nazis was getting her 600 thread count linens safely out of the war zone.

Morton is no fan of the former King.

“I realized that he was utterly self-absorbed, without any political intelligence,” he says. “He hadn’t even slept with that woman and yet he gave up the world for her. A more ambitious man would have remained king and Wallis would have been there — a bit like Charles and Camilla.”

Nevertheless, Morton and others believe that, as the reason for the abdication, Wallis may have saved the nation.

“Edward was an interfering king and saw himself as Edward the Peacemaker.”

The secret German documents suggest that, if Edward had been on the throne during the war, he would have pushed for accommodation with Hitler.

As for the Duchess, Morton says, “I had a lot more sympathy for Wallis Simpson than she’d ever had. She was blamed for the abdication when it had nothing to do with her. It was about Edward not wanting to be king.

“I think she was good for him, like a governess, providing comfort and security at a primal level.”

But at the time, says Morton, “Everybody just thought she was another mistress on the conveyor belt.”

Wallis thought so, too, and wanted nothing more than to enjoy her time in the sun, the jewels showered on her and the good life, according to Morton.

“She was witty and smart and incredibly flattered by the King,” he says. “It was a great gig. She didn’t see the warning signals, the trap. She couldn’t escape. She had to live out the greatest romance in history which was a strain. But she didn’t get it until the lock clicked shut.”

While bringing the 1939 abdication scandal into a new century, Morton also shares some insights into today’s Royal Family.

“There’s not a chance that the Queen will abdicate,” he says. “In Britain, abdication is a dirty word. But looking down the road, I think that William will abdicate for George.”

He cites the abdication last year of 76-year old Spanish King Juan Carlos in favour of his son, Prince Felipe, 46, as a precedent.

“Because we live longer, there’s no great necessity for William to do the job forever. “Let’s say Charles lives another 30 years and Wlliam will be in his 60s. It’s intriguing, for the Zoomer generation, to consider starting a new career in your mid-60s.”
Morton also has another prediction.

If the Royal baby due next month is a girl, William and Kate will name her Elizabeth Diana.