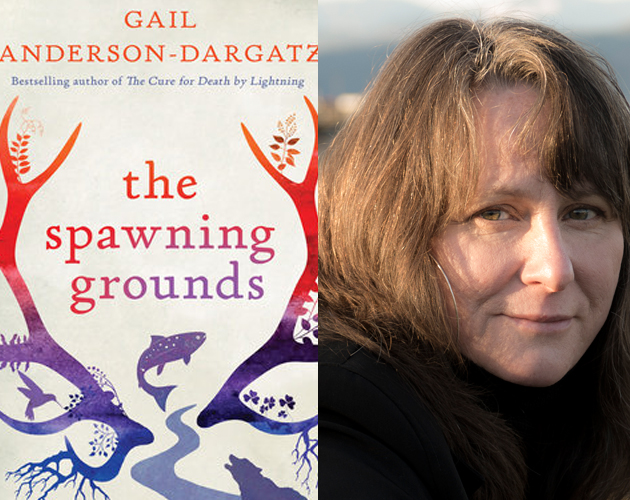 Actually, the 52-year-old author lives right on a lot of boundaries and that, she says, is what provides the tension in her fiction.

Her new book, The Spawning Grounds, is set in an area of British Columbia where “we have this interesting relationship between First Nations communities and settler communities. We’re right next to each other, working with each other.”

There’s also the boundary between the manufactured urban landscape and the mystery of nature.

In nature, she explains, “There is a spirit, a sense of ‘something else.'”

That “something else” inspires the magic realism in Anderson-Dargatz’s novel.

In The Spawning Grounds, the salmon and the river take on a mysticism that washes over the people on both shores, the Shuswap Nation and the settlers.

It leads to questioning whether the visions and trances experienced by a teenage boy in the settler community may be seen as a connection with the natural world that goes beyond ordinary, as the Shuswap believe, or whether they are signs of mental illness, as his family believes.

“That was something I wanted to explore,” she explains.”Most families are touched by mental illness in one form or another. In the Western view, it’s seen as a sickness to be medicated. Other cultures see it as a spiritual journey.”

The other contrast that comes to life in her fiction is the difference in attitudes to the natural world.

“The western perspective is that it’s something to harvest,” she says. “For the First Nations, the natural world is sacred, powerful, something to be revered and feared. It’s all about those tensions between our needs and nature around us, between one community against another.”

Writing about home provides another tension—for the author.

“My home landscape does inform my writing and always has,” she explains. “It feels like a character, alive and with its own spirit.”

But she says she has to leave home to write about it. “Being here I feel I have to get it right, and that interferes with fiction. The fictional landscape has to serve the narrative you’re writing.”

Most of her writing is done on Manitoulin Island where the family has a summer house. “I feel freer there to imagine the landscape of home,” she explains. “If you’re going to write fiction, you have to mess with the landscape.”

The author says she always has a lot of writing and editing projects on the go, including young adult fiction, but she’s also kept busy with two teenage sons at home and with teaching fiction writing.

As for being 52, she says, “it’s strange for me to be here, but I’m enjoying it. I feel more patient, more relaxed. Things that used to bother me don’t. The Spawning Grounds marks 20 years since my first book. Going back to revisit it, I remember thinking, ‘I’m going to be embarrassed by my early work.’ But I wasn’t. It was lovely. But it did feel like the work of somebody else.”