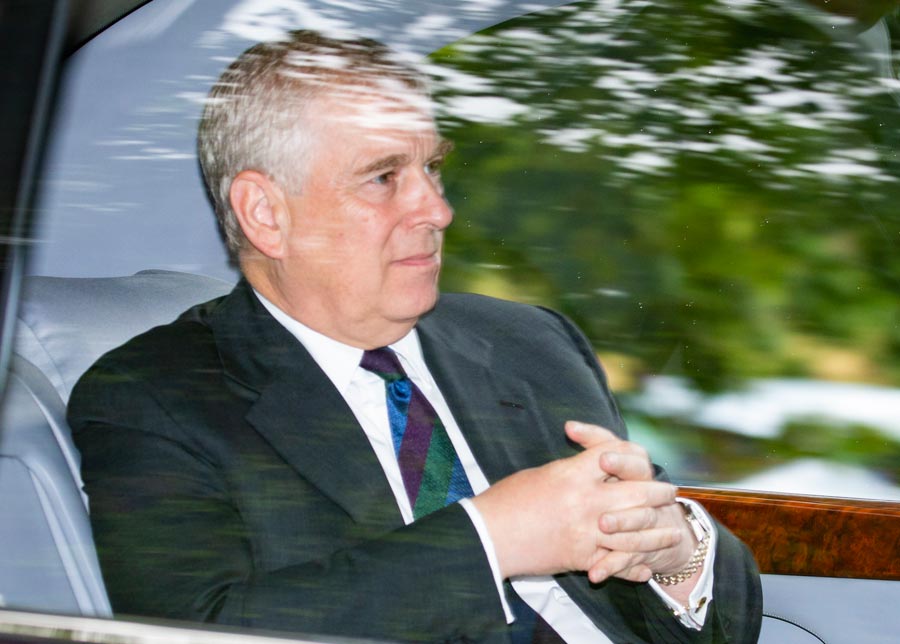 So which is it?

A man is known by the company he keeps?

Or, the wrongful charge of guilt by association?

I’m referring, of course, to His Royal Highness Prince Andrew and his unfortunate sojourn at the palatial Manhattan residence of the late, lowly Jeffrey Epstein.

Making the media rounds now is that possibly incriminating video from December 6, 2010,  of the prince peering through the massive oak front door of the mansion as a woman leaves, sending her off with a smile and a wave, then checking with a furtive glance to see if anyone was around to notice him.

Indeed there was — either someone with video capability or else a video surveillance camera.

Either way, the video was leaked and now not only is Andrew’s morality, judgement and even sanity being questioned, but also the continued existence of the 1200-year old institution known as the British monarchy.

Andrew was not alone in Epstein’s abode. The man of the house, convicted two years earlier on charges of soliciting underage prostitutes, was there, too, along with at least one young — or very young, or very, very young and very possibly under-age female. Both were seen leaving shortly after Andrew made his appearance, and then the girl went back into the house.

What in the world, you may well ask, was Andrew doing in the home of a convicted sex offender who had only avoided a conviction of sexually abusing and trafficking girls as young as 14 because he had A-list lawyers and impeccable connections?

You could be charitable and say that Andrew was consorting with Epstein because the prince at the time was the UK’s Special Representative for International Trade and Investment, and Epstein was a high-powered financier.

The two were photographed walking together in Central Park a few days previously.

You could also say that there’s no evidence of actual wrongdoing on the part of Andrew, though at least more than one former female “guest” of Epstein’s has accused Andrew of sexual misconduct.

But the only actual evidence that exists of Andrew at Epstein’s home is the video and certainly, peering through a door and waving goodbye to someone is no crime.

Responding to the infamous video, a Buckingham Palace spokesperson released a statement to The Daily Telegraph  last night, stating: “The Duke of York has been appalled by the recent reports of Jeffrey Epstein’s alleged crimes. His Royal Highness deplores the exploitation of any human being and the suggestion he would condone, participate in or encourage any such behaviour is abhorrent.”

Unfortunately for Andrew, there’s also that photo taken in London of him with his arm around the bare waist of then 14-year old Virginia Roberts Giuffre who has claimed Epstein forced her to have sex with the royal three times.

According to court filings submitted in 2015 as part of a long-running lawsuit challenging Epstein’s plea deal, Giuffre said Epstein ordered her at the time to “give the prince whatever he required” and report back to him with details of the abuse after.

Buckingham Palace issued a statement denying the accusations as “false and without foundation,” adding that claims about sex with a minor were “categorically untrue.”

Meanwhile, Epstein, as the whole world knows, was found dead in his prison cell in Manhattan on August 10 while awaiting trial for trafficking under-age girls for sex. The medical examiner said on Friday that he had hanged himself. Epstein was a friend of and socialized with people in high places besides Andrew, including U.S. presidents Trump and Bill Clinton.

The implications of all these accusations, rumours and evidence are staggering.

Whether anything more, and how much more will be revealed remains to be seen.

But it’s pretty clear that the centuries old sexual entitlement of powerful men coupled with the sexual submission of vulnerable girls is no longer in play.

A lot of high profile men have been caught in the crack between what was and what is.

Andrew, and many others who befriended Epstein and enjoyed his largesse, may be among them.