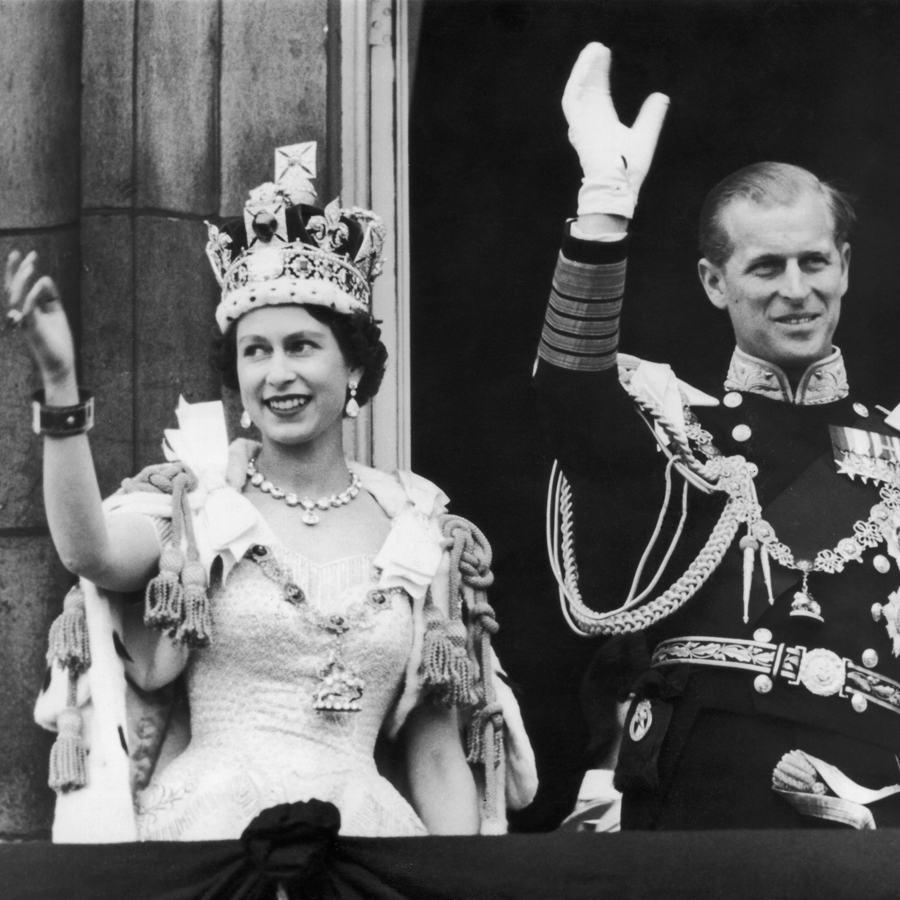 Queen Elizabeth II and the Duke of Edinburgh wave to adoring onlookers crowds from the balcony of Buckingham Palace on her coronation day — June 2, 1953. Photo: Keystone/Getty Images

I was born into a Canada that, for the most part, had no problem with the monarchy and for whom the looming Coronation of the young Queen Elizabeth was the most exciting thing to happen since the end of the Second World War. The only parallel in excitement I can recall was the advent of television, and it was parallel because the two — television and the Coronation — came together, or at least they did in our house.

The year was 1953 and I was not quite nine. My bossy older sister had just turned eleven. We were both sprawled on the carpeted floor directly facing “IT,” elbows down and chins expectantly up, supported by palms. My mother was seated in one of the two armchairs of the upstairs study. This was the “Twice-Around-the-Clock-Room,” as described by my decorator-journalist mother in Canadian House and Home: a master bedroom by night, a family study by day — a clever 1950s variant to all the subterranean “rec” rooms being carved out of dank old basements. My Scottish grandmother, my mother’s mother, Granny Dickinson, was seated in the other armchair.

“IT” was the first television set in the neighbourhood and had been bought two months earlier in preparation for this very moment. The date was June 2, the day of the Coronation. We waited an age while my father was on his knees fiddling with the dials. Finally he got the vertical and horizontal holds straightened out. Many neighbours were there with us. Since our purchase, two or three other neighbours had also bought sets for the same reason, and it was accepted that we all had to share with those who had remained skeptical of this new consumer contraption but nevertheless still wanted to see the Coronation.

In my Grade Two class at Oriole Park Public School, we had each just been given a large copper coronation coin with a profile of the Queen on one side and the royal cipher — EIIR — on the other. I have it still, and up to then I don’t think I had ever received anything quite so precious. I saw it as somehow coming mysteriously and directly from Buckingham Palace. My granny and I knew all the details of the Coronation. We knew that the British Broadcasting Corporation was going to film the service and jet planes of the Royal Canadian Air Force, each outfitted with a special darkroom to develop the film en route, would fly each reel to Canada as it was received, to be aired on the Canadian Broadcasting Corporation shortly after the airplanes landed. Amazingly, we would be watching the Coronation in Canada on the same day it happened in London: an historic first, and John Fraser and his Scottish granny were on top of this story from start to finish.

Granny Dickinson had even bought me a special lead Coronation coach set for Christmas, and I was constantly trotting the poor Queen and Prince Philip and a select number of the Queen’s horses and Queen’s men down the Mall. As I could lift the roof of the golden state coach, I often felt the need to make sure the Queen was still sitting properly with her hand in a permanent semi-wave, a wave directed to all her people, which included my granny and me, of course, but also to those handsome Zulu warriors and their bare-chested wives as seen in the pages of National Geographic magazine, not to mention the colourful Sikhs of India, the busy Chinese of Hong Kong, the dour Boers from South Africa, the beautiful Maori from New Zealand, the well-tanned Australians in their bizarre swimsuits and bathing caps, the warmly clad Inuit from the Northwest Territories of Canada, and — my idol — Harry Belafonte, all by himself, from Jamaica.

She was ours and we were all hers. There wasn’t a jewel in the Imperial State Crown whose history and dimensions we didn’t know. Granny D and I knew the weight of the big golden orb and the small golden orb, the length of the jewelled sceptre, and the engraving pattern along the blade of the Sword of State. We knew how many little ermine it took to form the border on her coronation train, and how far below the knees the buttons on the silk breeches of the pageboys were fastened.

We also knew that during two very holy moments in the service — when the Archbishop of Canterbury anointed her head and naked breast with holy oil, and later when she took Holy Communion (the wine for which came from grapes grown in a vineyard near Bethlehem, while the sacred water, following purification, was from the River Jordan) — the television cameras would be turned away. Our eyes would be averted at both these very private moments. I was so relieved.

Ever since I had read an account of the forthcoming service in the Illustrated London News and learned that the archbishop, Dr. Geoffrey Fisher, was going to make the sign of the cross with the holy oil on her naked breast, I became concerned about the Queen’s right to privacy. I think that at the time I thought it would be okay if I had a glimpse of the naked breast. I would respect the privacy and be proud of the viewing privilege. But I wasn’t so sure about the rest of the world. Actually, I was pretty sure the rest of the world shouldn’t be allowed to see this.

I was also unaware at the time that (a) it was only at the very top of the breast — the collarbone almost — that the sign of the cross was made, so there was nothing untoward at all about the business, and (b) according to her famous nanny, Miss Marion Crawford (“Crawfie”), the only total privacy Queen Elizabeth has ever enjoyed was during the nine months she was lodged inside her mother’s womb, so she had clearly dealt with the privacy issue years before.

It was a black-and-white coronation on television, of course. It would be two days before the movie houses had the colour version. We all went to that too, standing up for the royal anthem before the film had even started, as we did for every matinee film I ever went to in my childhood. This time, though, it seemed weird to be singing “God Save the Queen” instead of “God Save the King.” Exciting, I guess, in the way that all change is exciting, but also weird.

But what precisely ensued in Canada after the Coronation to transform the euphoria for the young Queen into the seemingly prevailing indifference for the aging Queen is not entirely clear in my own mind. Professional historians would no doubt point to the Quiet Revolution in Quebec; the full consequences of postwar immigration; growing Canadian nationalism, which reached some sort of apotheosis with the centennial of Confederation and Expo 67; the Vietnam War; and the “student revolution” of the late 1960s as part and parcel not only of the decline in deference but also the decline in identification with the symbols that had once bound the country together, the “British monarchy” being the most obvious. Canadian passports used to describe all Canadian citizens as “British subjects” — this was meant to give Canadians respect in countries where Great Britain carried far more clout than Canada. The decline of British influence soon enough made this safety clause irrelevant, and with it came the emerging idea that we had a “foreign” head of state.

In the excitement of the 1967 Centennial celebrations — “the last good year” in Canada, if you follow Pierre Berton’s accounting of the country’s fortunes — and the early years of the prime ministership of that other Pierre, the idea that we had “grown up” and had no need of our former colonial master really took hold. The fact that few people in Canada had regarded Britain as a “colonial master” was almost beside the point. The subsequent Trudeau initiative to patriate the remaining small clauses of the Constitution seemed to typify the mood.

A friend of mine who worked in the British Foreign Office at the time said to me one day, with that ironic and occasionally insufferable English condescension that fuels antipathy: “Well, it looks as if we are going to let you people actually have a revolution.” I wanted to reach out and turn his nose as he talked, but I knew what he was getting at: no one in Britain, least of all the Sovereign, and least of all anyone in the British government, was trying to prevent Canada from being Canada in whatever way the country wanted to be. What it seemed we wanted during the patriation process was a sense that we had finally “arrived” and were “on our own.”

The only trouble was that imbedded in our own way of doing things was the notion of the Crown, with a Sovereign who was now officially the “Queen of Canada” sitting on a throne — an actual throne that resided in Westminster Abbey, and a metaphorical throne that was lodged in the Canadian Senate and throughout ten legislatures in ten Canadian provinces. And what on earth should we do about that? What on earth would we do with her? What on earth were we to do with the fractious, bilingual, and bicultural country that soon enough would be multicultural — with a vengeance?

Also, years later, I read Roald Dahl’s wonderful memoir of his childhood, Boy, and discovered that he went to a private school in England where the headmaster, the self-same Dr. Fisher before he became such a high and mighty prelate of the church, got his jollies by savagely caning little boys. That tweaked my old concern about the Queen’s being so exposed to his gaze, until I realized baser things turned him on and I needn’t have worried so much.

Excerpted from The Secret of the Crown: Canada’s Affair With Royalty by John Fraser @2012. Reprinted with permission of the publisher, House of Anansi Press. www.houseofanansi.com