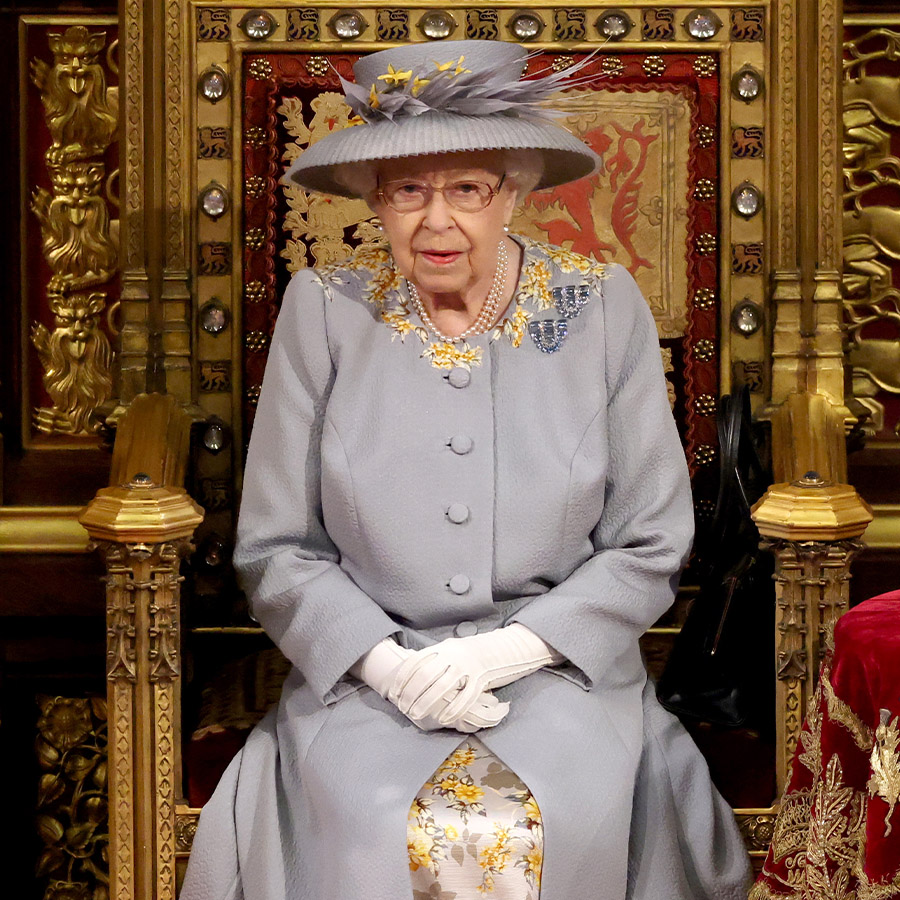 Queen Elizabeth II ahead of the Queen's Speech in the House of Lord's Chamber during the State Opening of Parliament at the House of Lords on May 11, 2021 in London, England. Photo: Chris Jackson / WPA Pool/Getty Images

Accompanied by her son and heir, Prince Charles, 72, and his wife, Camilla, Duchess of Cornwall, 73, Her Majesty the Queen attended the State Opening of Parliament in Westminster on Tuesday. As Sovereign, the Queen traditionally outlines the major legislation that the serving U.K. government —currently led by Prime Minister Boris Johnson — intends to introduce over the coming months. Today marks the Queen’s 67th State Opening of Parliament, one of her most important ceremonial roles as head of state.

In a ceremony stripped back because of the COVID-19 pandemic, the Queen, who wore a day dress instead of the usual robes and crown, read out the bills the government hopes to pass during the next year on everything from job creation and health care to stripping back post-Brexit bureaucracy.

“My government’s priority is to deliver a national recovery from the pandemic that makes the United Kingdom stronger, healthier and more prosperous that before,” the 95-year-old Queen said in the speech written by the government to mark the start of a new parliamentary year.

“To achieve this, my government will level up opportunities across all parts of the United Kingdom, supporting jobs, businesses and economic growth and addressing the impact of the pandemic on public services.”

In the 18 months since Johnson’s Conservatives were re-elected with a big parliamentary majority, his agenda has been eclipsed by the pandemic, which caught his government off guard and has absorbed many of its resources for making policy.

With Britain’s vaccination program now far ahead of many other countries and the spread of the virus at low levels, Johnson, 56, is keen to revive his ‘levelling up’ agenda and re-set a premiership also clouded by accusations of cronyism.

In an introduction to the pages of government pledges, Johnson said: “The crisis has in no way diminished the government’s ambition or appetite for change … We have been given an historic opportunity to change things for the better.”

After completing Britain’s exit from the European Union at the end of 2020, Johnson has wanted to showcase what he sees as the benefits of Brexit. But he has so far been unable to match a pledge made in the 2016 Brexit referendum campaign of handing the health service 350 million pounds ($599 million) a week.

His government will instead try to reduce what it saw as excessive EU bureaucracy by streamlining state aid and procurement rules so it can target funds to ailing businesses more quickly and directly.

Also part of the government’s strategy to “build back better” from the coronavirus pandemic are education reforms to help adults access lifelong learning — seen by ministers as key to reshaping the British workforce.

On climate change, the government reaffirmed its commitment to achieve net zero greenhouse gas emissions by 2050, a pledge it hopes will spur other nations to cut their emission targets before a United Nations climate summit in November in Scotland.

Much of Tuesday’s Queen’s Speech comprised policies and proposals already flagged, prompting the opposition Labour Party to challenge the government to turn its “rhetoric into reality.”

Others criticized the omission of thorny issues such as the provision of social care to the elderly, disabled and others, which successive governments have avoided tackling. The government said it would make reform proposals for the sector in 2021.

“We are bitterly disappointed that social care only got a passing mention in today’s Queen Speech,” said Edel Harris, chief executive of the learning disability charity Mencap.

“Where’s the ambition and funding when people are being left without the vital care and support they need to get by?”

Queen Elizabeth Stoic and Alone as Her ‘Strength’Prince Philip Is Laid to Rest; Prince William and Harry Talk