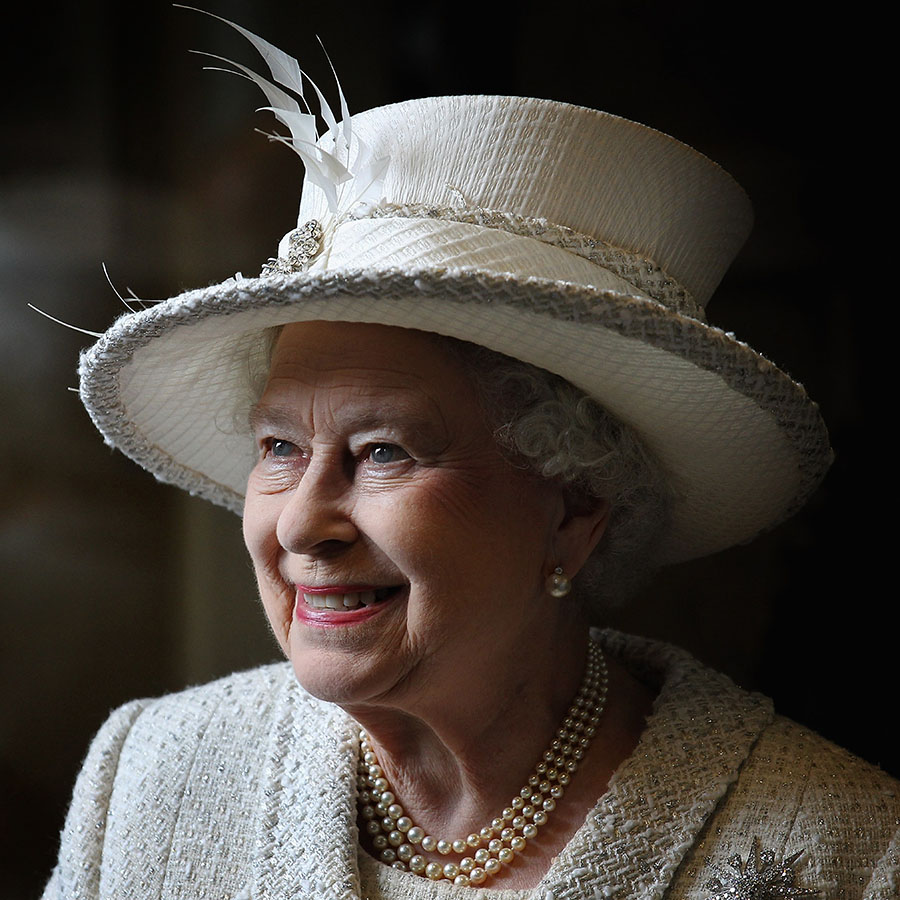 The Queen, along with the rest of the Royal Family, is still officially in mourning after Prince Philip's death. Here, she is pictured on a visit to Cyfarthfa High School and Castle on April 26, 2012 in Merthyr, Wales. Photo by Chris Jackson WPA - Pool/Getty Images

The Queen used the occasion of her birthday to thank her subjects for their support in this difficult time. Via the Royal Family Twitter account, she said: “I have, on the occasion of my 95th birthday today, received many messages of good wishes, which I very much appreciate.”

She referred to this as “a period of great sadness,” for her family, adding “it has been a comfort to us all to see and to hear the tributes paid to my husband, from those within the United Kingdom, the Commonwealth and around the world.”

She then turned the conversation away from her own birthday, muted by mourning, to pay tribute to her recently departed husband:
“We have been deeply touched, and continue to be reminded that Philip had such an extraordinary impact on countless people throughout his life.”

In an earlier tweet from the Royal Family, it was confirmed that The Queen would remain at Windsor Castle for the occasion as she continues to observe a period of mourning.

British Prime Minister Boris Johnson added his best wishes to the monarch as well with a statement reading: “I would like to send my warm wishes to Her Majesty The Queen on her 95th birthday. I have always had the highest admiration for Her Majesty and her service to this country and the Commonwealth. I am proud to serve as her Prime Minister.”

The Queen’s 95th birthday today will be a muted celebration for such a milestone, coming as it does just days after burying Prince Philip, her husband of 74 years this past weekend. The monarch will be officially in mourning. This is also the Queen’s second pandemic birthday and, once again, the traditional gun salutes throughout the capital have been cancelled because of precautions. In a normal year, the flurry of military honours include: a 41-gun salute at Hyde Park; a 21-gun salute at Windsor Great Park; and a grand 62-gun salute at the Tower of London.

It is expected the Queen will have a low-key birthday luncheon with only close family in attendance, in line with COVID-19 restrictions. The only public acknowledgement of the day is expected through official royal social media channels.

April 21, 1926 is the Queen’s “real” birthday. The full celebrations are scheduled for the second Saturday in June. This tradition of the monarch’s two birthdays is directly attributable to the fact that it is a national holiday, and, to ensure good weather, the “official” birthday is on the cusp of summer. This practice goes back to 1748 and the reign of George II, who was born in November. Not the greatest weather for the outdoor celebrations, feasts and parades to mark a sovereign’s natal day.

The Trooping the Colour, is the big official birthday event each year. It is the height of royal pageantry, involving some 1,400 soldiers, 200 horses and 400 musicians.

For royal fans, it is the prime opportunity of the year (with the rare exception of weddings and funerals) to see the family up close. Senior royals with honorary military roles ride on horseback in the parade; the rest (Kate, Camilla, Sophie Wessex, for example) ride in open carriages. This is also a huge fashion moment for senior royal women; and the family’s children are also on display on the balcony at Buckingham Palace to wave to crowds and watch the spectacular Royal Air Force flyby. Sadly, this June’s Trooping the Colour has been cancelled again due to the pandemic; it remains to be seen if a smaller, COVID-compliant “mini Trooping” ceremony will be held at Windsor Castle, as it was in 2020.

The now-cancelled plans for this year’s big “official” birthday also were meant to include honours for the Duke of Edinburgh’s anticipated centenary (on June 10); the royal consort died just months before that triple-digit marker.

The Queen suffered another loss recently: on the day of Prince Philip’s funeral, her close friend and racing manager Sir Michael Oswald, died at the age of 86.

The Queen is a keen horsewoman and racing enthusiast, and the spring season highlight is always the races at Royal Ascot. Sir Michael was first employed in 1970 by the Queen Mother, serving as advisor to the races until her death in 2002; subsequently, he went on to serve the Queen in the same role. The Royal Studs manager was honoured in 2020 with the Knight Grand Cross of the Royal Order of the Garter. Keen royal watchers and horse racing fans will recognize Sir Michael at the Queen’s side at races throughout the decades. Her face always lights up around equine pursuits. The loss of another loyal support will no doubt add to the sombre nature of this year’s birthday.

The Queen’s next major anticipated public appearance will be the opening of parliament on May 11; her son and heir Prince Charles will accompany her for that duty.