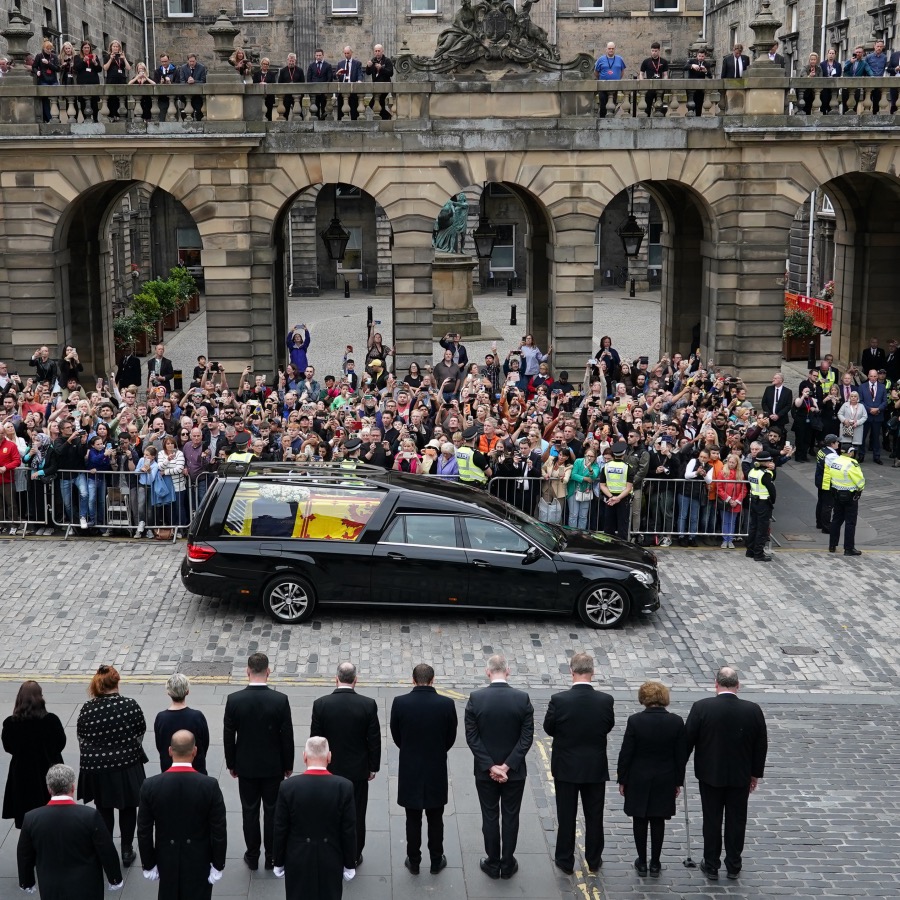 Crowds watch the cortege carrying the coffin of the late Queen Elizabeth II past Mercat Cross in Edinburgh to rest in the throne room of the Palace of Holyroodhouse. Photo: Ian Forsyth - WPA Pool/Getty Images

Queen Elizabeth’s coffin was taken from her summer home in the Scottish Highlands to Edinburgh on Sunday, past tens of thousands of mourners lining the route to pay tribute, many in sombre silence, some applauding and others in tears.

Shortly after 10 a.m. BST (0900 GMT), a hearse carrying Elizabeth’s oak coffin emerged from the gates of Balmoral Castle, where she died on Thursday aged 96, at the start of a six-hour slow drive to the Scottish capital.

The coffin was draped in the Royal Standard of Scotland with a wreath on top made of flowers taken from the Balmoral estate including sweet peas, one of Elizabeth’s favourites.

In an emotional tribute to his mother on Friday, the new monarch King Charles said she had begun a “last great journey” to join her husband of 73 years Prince Philip, who died last year.

The cortege from Balmoral is the first of a series of events leading up to the state funeral at Westminster Abbey in London on Sept. 19.

Her death has drawn tears, sadness and warm tributes, not just from the Queen’s own close family and many in Britain, but also from around the globe — reflecting her presence on the world stage for seven decades.

As the hearse reached the small village of Ballater near Balmoral, hundreds stood beside the road in silence in bright morning sunshine as the hearse passed, some throwing flowers into the road.

“It’s just very, very sad. I’m happy I was here to say our goodbyes,” said Elizabeth Alexander, 69, who was born on the day the queen was crowned in 1953.

Accompanied by the Queen’s daughter, Princess Anne, the cortege wound its way from the remote castle through picturesque countryside, villages and small towns, at one point passing a guard of honour formed by dozens of tractors lined up in adjacent fields by farmers.

It arrived in Edinburgh, where the coffin will be taken to the throne room of the Palace of Holyroodhouse.

“There was no way I could miss this. I would regret it for the rest of my life,” said Eilidh Mackintosh, 62, who left her home at 6 a.m. to be sure of a good view on Edinburgh’s famous Royal Mile where large crowds were gathering.

“She never let us down and I didn’t want to let her down either. Now she has gone there is a big hole in the heart of the nation.”

Many thousands have already gathered at royal palaces in the days since Elizabeth’s death, and large piles of flowers are massing as people visit to pay their respects.

“I know how deeply you, the entire nation — and I think I may say the whole world — sympathize with me in the irreparable loss we have all suffered,” Charles said at a ceremony on Saturday.

Charles became king immediately after his mother’s death and was officially proclaimed the new monarch at the ceremony, full of pageant and centuries-old traditions.

Similar proclamations are following across the United Kingdom and the other 14 realms of which Charles is now head of state, including Australia, Canada, Jamaica, New Zealand and Papua New Guinea.

The Queen came to the throne following the death of her father King George VI on Feb. 6, 1952, when she was just 25. Her coronation took place a year later.

While Elizabeth’s death was not totally unexpected given her age and deteriorating health, there was still a sense of shock at the news.

“We all thought she was invincible,” her grandson Prince William, now the heir to the throne, told a well-wisher on Saturday as he met crowds at Windsor castle.

Funeral for a Queen

The day of Elizabeth’s funeral will be a public holiday in Britain, officials announced. U.S. President Joe Biden said he would be there, although full details of the event and the attendees have not yet been released.

Before that, her coffin will be flown to London and there will be a sombre procession when it is later moved from Buckingham Palace to Westminster Hall where it will lie in state for four days.

“It goes without saying that we can expect large numbers of people,” a spokesperson for Prime Minister Liz Truss told reporters.

Truss, whose appointment as prime minister on Tuesday was the Queen’s last public act, will join King Charles as both the new head of state and prime minister tour the four nations of the United Kingdom in the next few days.

Charles, 73, is now the 41st monarch in a line that traces its origins to the Norman King William the Conqueror who captured the English throne in 1066.

Elizabeth’s death has capped a difficult couple of years for the Royal Family.

The most high-profile issue has involved her grandson Prince Harry and his wife Meghan, who stepped down from royal life in 2020 to move to California from where they both have heavily criticized the institution.

That has left them alienated from the rest of the family, with Harry and his older brother William said to be barely on speaking terms. But the death of their grandmother has seen differences put aside, as they appeared together with their wives outside Windsor Castle to meet the crowds on Saturday.

A royal source described it as an important show of unity at an incredibly difficult time for the family.