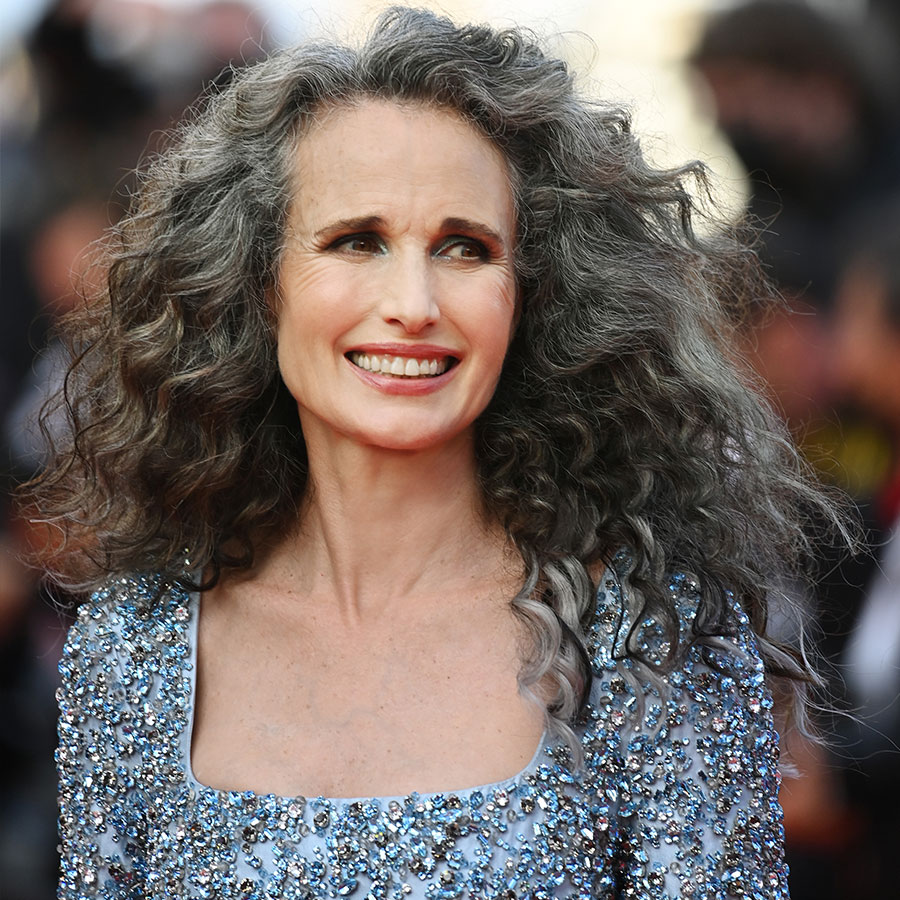 Once a sign that a woman had thrown in the beauty towel, grey hair — pewter, ash, salt and pepper, or silver — has morphed into the ultimate sign of cool confidence in an age-obsessed culture.

Swishing down a Cannes Film Festival red carpet this week, a lioness mane of wavy pewter matching her bead-embellished gown, model-actress Andie MacDowell, 63, embodied how far women, and society at large, have come in recasting grey hair as glam.

Little more than a decade ago, grey was a beauty gaffe. No woman over 40, never mind one who made her living off her gorgeousness, would boldly accentuate her “real” age at such a high-profile event. The gold standard was the reverse — clawing back the years via a constant cycle of salon appointments.

As zeitgeist shifts often do, it first showed up on the catwalk. Calvin Klein sending a grey-haired Kristen McMenamy, formerly known for her flaming red locks, down the runway in 2010. Givenchy and Chanel followed suit and grown women everywhere applauded a move towards using models that reflected the customers who actually bought that costly designer clothing.

In short order, Grey Model Agency launched in London with a focus on older models and the coming years would see a legion of silver foxes — Maye Musk, Yazemeenah Rossi, Pia Goring, the evergreen Carmen Dell’Orefice and Lauren Hutton — face beauty and fashion campaigns, Town & Country declaring: These 8 Models Will Give You Gray Goals.

By 2015, the trend had gone wide. Recast as edgy glam, a chic colour choice not an inevitability to be fended off, faux grey was embraced by young A-list tastemakers. Cara Delevingne, Lady Gaga, and Kate Moss leading the charge, the trend trickled down to celebs like Kylie Jenner, Nicole Richie, Ginnifer Goodwin and a teenage Lourdes Leon. A stroll down the hair colour aisle revealed a whole section of grey products for young gals. And #Grannyhair trended across social media platforms as silver screen iconoclasts Jamie Lee Curtis, Judi Dench, Diane Keaton, and Helen Mirren nodded sagely.

But what really — literally — brought it home was pandemic laissez-faire. Civilians to celebrities, online and off, grey hair sprouted up everywhere. Magazines ran stories on Rocking The Gray Hair Trend, All The Rage Gray Hairstyles, and Grey Ombre. Women posted silver selfies to dedicated “Grey hair is sexy” Facebook groups as Instagram feeds filled up with Tracee Ellis Ross and her silver threaded topknot, a smiling, salt and pepper Lily Allen, a grey-haired and generally naked, Paulina Porizkova. The Duchess of Sussex reading her son a story in a video clip, head down, her silver-streaked hairline aimed straight at the camera. A beaming Allison Janney debuting her new jaunty gray pixie cut on a chat show.

“I was in Ohio for most of 2020 and a healthy few inches of gray came in and I just decided I wanted to be free from hair colour,” Janney told Ellen DeGeneres in February 2021, having remarked to People magazine earlier that month that she’d “always wanted to cut it off and do a Helen Mirren thing”.

As to Helen Mirren and her trailblazing coiffure, the perennially modern 75-year-old L’Oréal Paris brand ambassador laughs it off. “I did it because I’m lazy. Honestly, I’m so lazy about my hair. It’s a lot of work and I don’t want to sit in a salon for hours. I just can’t be bothered.”

A sentiment echoed by British Vogue editor, Sarah Harris, who won style icon status back in 2015 for embracing her natural grey hair from a young age. “I started to go grey when I was 16. It didn’t bother me enough to colour it. My mom was white by the time she was 30 and watching her dye her hair every four weeks, being a slave to a salon never appealed to me,” Harris told Allure, adding, “At least three times a week, a stranger will ask who my colourist is. I don’t know if they ever believe me when I tell them it’s natural.”

In an added bonus, Mirren finds her pale hair colour the perfect blank canvas for experimenting with cool temporary hues. Inspired by an episode of America’s Next Top Model she went pink for the 2019 Cannes Film Festival.

“There was this little English girl. Bright pink hair and she looked so great. Normally, whitey-blonde like me, she went pink one week, the next week she wasn’t pink, the next week she was pink again. I realized it was something you could come and go with really easily and thought, ‘Well, I’ll do pink for the night. You’ve got these great dyes now. Wash them in, wash them out. The great thing about this colour is it’s a great base for going pink or green or blue.”

While candy-coloured silver isn’t for everyone, the beauty industry has cottoned on to the movement. In 2018, Redken came out with a line of tinted hair glosses created specifically for grey hair with toning, semi-permanent shades, Pearl, Ash, Titanium, or Chrome, that impart a lip-gloss like shine.

“There are so many colour techniques you can use to enhance grey hair,” Redken’s Global Creative Colour Director, Josh Wood, explained in an interview with The Telegram. “It’s opening up a new world to women, showing them that they can look glamorous and fashionable with grey hair.”

“Women were just so terrified of having white or grey hair because it immediately put them into a different category,” says Mirren, who we’ll let have the last word. “And of course, you are in that age group. I’m sorry, but you are! Why not just embrace it, go with it, and welcome it?”

‘Quarantine’ Roots Are a Reckoning in the Debate Over Going Grey