If the Shoe Fits: Balenciaga Becomes a Brand Ambassador for Bad Taste With New “Destroyed” Sneakers 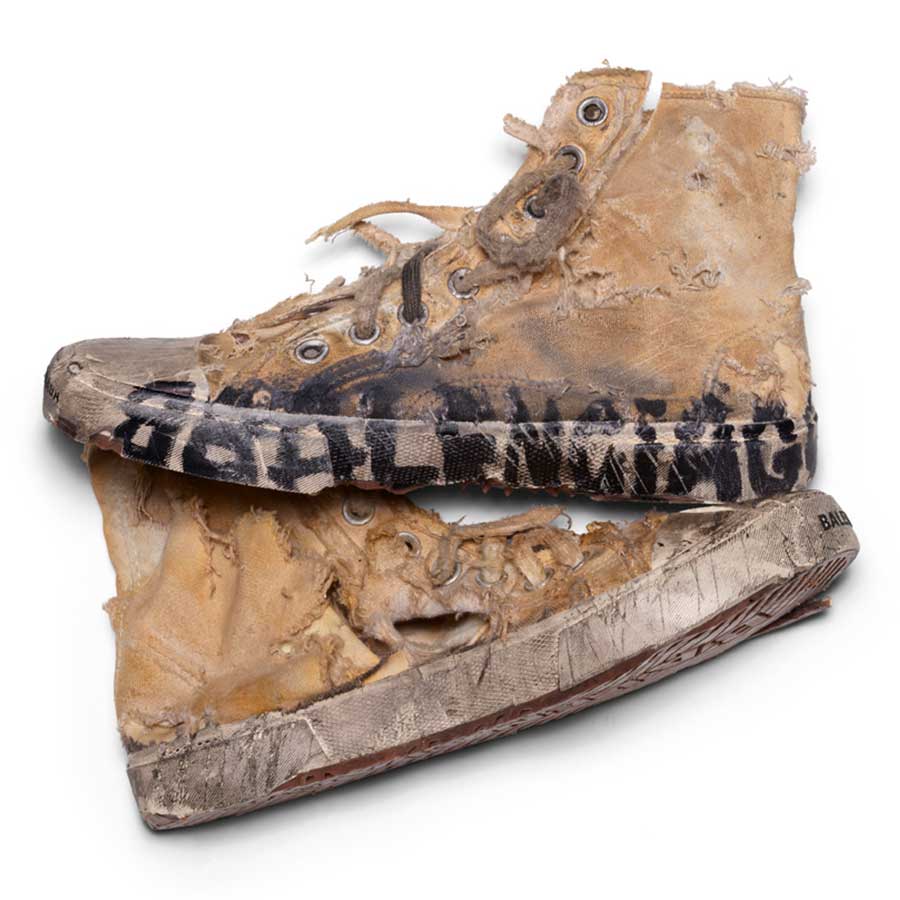 Balenciaga's new "destroyed" sneakers retail for $635-$735, with a limited-edition version priced at around $2,300. Photo: Courtesy of Balenciaga

With their latest offering — a decrepit running shoe priced as high as $2,350 — Balenciaga reaches new heights of cultural cluelessness while proving that, for the 21st century incarnation of the august fashion house, social media attention is more integral to the brand’s success than making beautiful clothes.

While fashion reflects the zeitgeist, high-end labels often miss the mark when designers ruminate sartorially on tetchy issues like politics or the class struggle. Last year, when Louis Vuitton offered a line of Palestinian nationalist headscarves “enriched” with the LV logo — not a dime earmarked for the cause — the item was quickly pulled off the market. But it’s Dior’s Fall 2000 collection that lives in infamy. Taking “inspiration” from the homeless and the mentally ill (in that, some drape themselves in newspapers to keep warm), designer John Galliano sent models down the runway swathed in eye-wateringly expensive silk “newspaper” dresses. ”It’s hard to imagine a couture client shelling out US$25,000 for a dress so she can look like a bum,” scoffed Cathy Horyn, fashion writer for the New York Times. And yet Sarah Jessica Parker, as Sex and the City’s Carrie Bradshaw, wore two versions of it — one in a Season 3 episode of the series in 2000 and again in 2009 while filming the movie Sex and the City 2.

Now, Balenciaga, a brand that’s come to pride itself as a purveyor of poor taste justified as “classist dialogue,” boasts among this season’s offerings a “destroyed” Converse-style sneaker. “Beyond offensive” was sustainable fashion advocate Livia Firth’s assessment of trainers that look like something retrieved from an alley trash bin but which cost between $635 and $735 for the regular model, all the way up to the $2,350 price range for the extremely limited-edition “extra destroyed” version.

We all chortled (at the idiots who bought them) when Balenciaga came up with a $2,775 copy of the “iconic” Ikea shopping bag and looked away when they reinterpreted the fashion crime that is the Croc as a high heel for $825. But was the haute label’s penchant for pop culture co-opts so “amusing” when it launched its 2017 “Bern-core” collection that included artfully distressed $520 ballcaps emblazoned with the brand’s logo recast to mimic the campaign emblem of Bernie Sanders — a candidate fighting for the rights of the working class. In the same vein, Balenciaga reproduced the uniforms of French municipal employees in 2021. Marketing “fashionable” city worker jackets to any one with $6,000 who wanted to play: “Look at rich me being ironically working class.” Consumers with money to burn having a giggle by sardonically adorning themselves in working-class trappings. Hilarious. Marie Antoinette dolled up as a shepherdess.

The label’s current designer, Demna Gvasalia, fled civil war in Triblisi, Georgia, for Dusseldorf and worked for Vuitton and Margiela before launching his Vetements brand in 2014, which caught attention for its $300 DHL T-shirts that went viral alongside a debate over whether this was subversive or a scam. Either way, it’s a signature stunt that Gvasalia brought to Balenciaga, where you may now treat yourself to a $1,000 “dry cleaning” shirt. When not partnering with Fortnight on videogame versions of runway collections or producing stadium-sized listening parties for Kanye’s 2021 album, Donda, he’s landing Kim Kardashian as the season’s campaign mode, introducing WTF collections, tagging unwearable clothes with four-digit price tags and, as GQ put it, finding the “outer reaches of ugly.”

Of course, Gvasalia’s approach sees the fashion world anoint him an avant-garde savant duly challenging our perspective on luxury by transforming mundane objects into expensive goods; reinventing a venerated fashion house in a blizzard of ludicrously priced statement T-shirts and homeless people shoes. He would swiftly join the exalted one-name pantheon of Cher, Madonna, Gaga, Britney and Ye, as Balenciaga announced with the SS22 collection that, “From now on, Demna uses only his first name.”

Legendary Spanish designer Cristóbal Balenciaga is likely rolling in his grave. “The first fitting at Balenciaga is worth the third at any other house,” said Marlene Dietrich of a designer whose contemporaries, Chanel to Dior, deferred to as the “truest couturier” and the “master of us all.”

Balenciaga, who draped meticulously cut gowns on the swans of the international Best-Dressed List — Gloria Guinness and Mona von Bismarck to Bunny Mellon, Barbara Hutton and Grace Kelly — would be appalled by the parade of poor taste kitsch now produced under his name. His eponymous label, once synonymous with a flawless elegance, now faced by a reality TV queen who shot to fame on a sex tape; a label that designs grubby $2,300 sneakers.

A designer known for his architectural elegance — “A woman has no need to be perfect or even beautiful to wear my dresses. The dress will do all that for her”— The Victoria & Albert Museum in London exhibits X-rays of Cristóbal Balenciaga’s couture garments and is also the permanent home of the Balenciaga collection.

While today’s Balenciaga no doubt assumes it’s channelling the ironic hauteur of Charles Baudelaire — “What is exhilarating in bad taste is the aristocratic pleasure of giving offense”— it comes off as more Charles Bukowski: “Bad taste creates many more millionaires than good taste.”