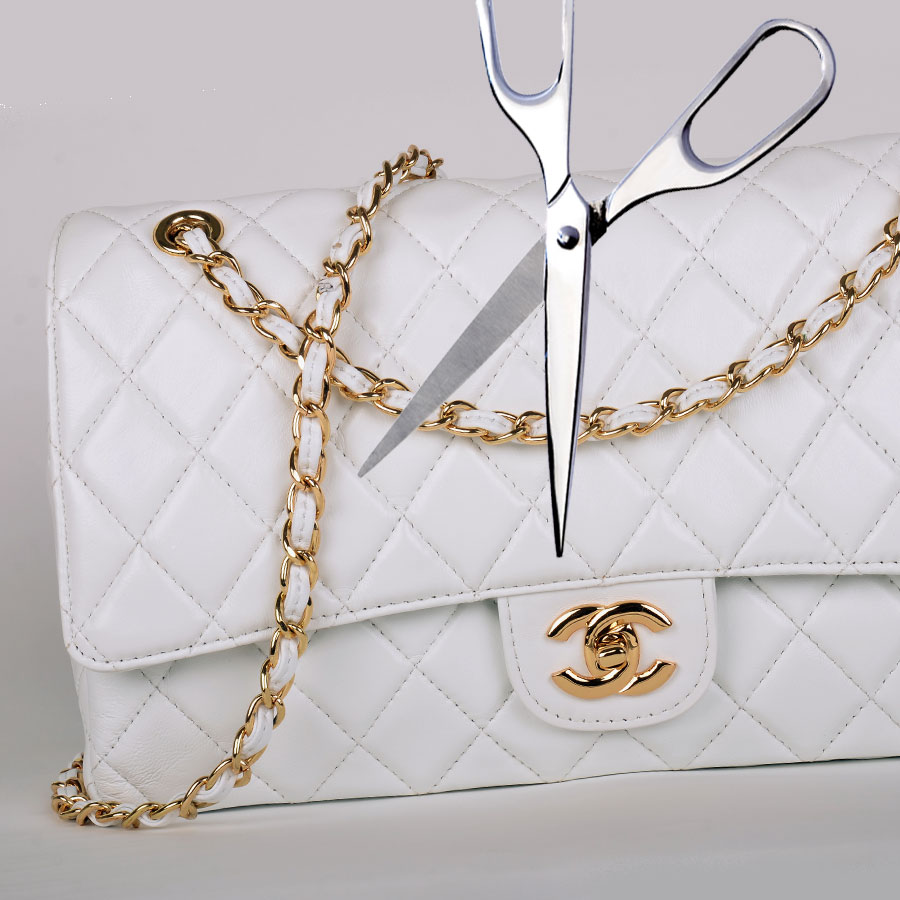 Some Russians, outraged by the Chanel brand's ban on sales in their country in light of the Ukraine invasion, are taking scissors to their Chanel purses in protest. Photos: Chanel bag (IZorina/Getty Images); Scissors (Creativ Studio Heinemann/Getty Images)

By far the country’s favourite designer label — Chanel rings up $12 to $13 billion in annual sales in Russia, compared with second place Dior at $3 to $5 billion — the flush Russian fashionistas are fuming that the French fashion house shuttered local boutiques and halted imports. In a final indignity, Chanel clerks “forced” Russians shopping abroad, in say Dubai or Saudi Arabia where they’re still free to travel, to pledge in writing that they would not wear or display any goods they took home to Russia. Russophobia! railed the models, actresses, influencers, and wealthy wives of Instagram, who began posting videos of themselves chopping up their beloved bags.

“If Chanel House does not respect their clients, why do we respect Chanel house,” Russian model Victoria Bonya, 42, asked her 9.3 million followers from her balcony in Monaco, hacking a black quilted number in two and tossing the leather shards off camera with a dismissive, ”bye-bye …” At least she wasn’t Moscow socialite and former Chanel front row regular, Yana Rudkovskaya, 47, who’d spent “over a million euros” on the French label. Yana will need a lot of scissors.

Denouncing the brand for “discrimination” and “humiliating my compatriots,” television presenter, Marina Ermoshkina, 28, attacked her grey Chanel bag with a pair of hedge clippers, declaring to her 300,000 followers: “No bag is above my love for my Motherland!” Also valiantly protesting “segregation by nationality” by destroying luxury accessories that only a small percentage of the Russian population can afford, DJ Katya Guseva, 39, told her 587,000 followers: “I will simply cut up this bag. We Russian women are stunning regardless of having Chanel. We know it, Chanel knows it — the whole world knows it.”

Professional beauties braying about their wealth and gorgeousness while scissoring up $10,000 handbags on a sun dappled porch of a palace on the French Riviera is not a good look as thousands of Ukrainians flee bombed-out cities with one suitcase that now holds all their earthly possessions. “Why don’t they start a challenge selling their Chanel accessories in favour of children and refugees?” suggested one social media commenter. But there was no word of remorse for the slaughter over the border that instigated the sanctions in the first place. Ignoring war crimes as the basis for the ban, Moscow’s foreign ministry spokeswoman and lead troll, Maria Zakharova, accused Chanel of joining “the Russophobic campaign to cancel Russia.”

Russian singer and television host, Anna Kalashnikova, 37, lanced the French label for its own dark past. “Coco Chanel was not only mistress of a Nazi officer, but an agent of German intelligence. This action of her brand really makes me remember her biography. It’s so low to support fascism and Russophobia.”

Not that Coco Chanel’s past as a Nazi collaborator had ever troubled her before, Kalashnikova too faced prejudice … in the form of being denied a Chanel bag in Dubai.

In any case, extra points all round to women who cite “discrimination”, racial “segregation” and “fascism” as the cause of their disgust while hailing themselves as proud citizens of a “Motherland” famed for state sanctioned racism and anti-LGBT legislation that bans free speech and a free press.

Not only a Nazi collaborator, Coco Chanel was also a spy for the Reich, thanks to her lover, Baron Hans Günther von Dincklage, a German military intelligence officer with whom she lived at the Ritz in occupied Paris. No wartime fling, their affair lasted for 15 years between 1940 and 1954 — the year Chanel launched her post-war comeback in Paris. Retaining a Nazi lover being somewhat inconvenient to that plan …

Speaking of inconvenient, Chanel was once photographed by famed fashion photographer Richard Avedon beneath a sign that read “pourquoi Hitler.” The photo reportedly angered Chanel and thus it was never published.

Pro-Putin activists vandalized Chanel’s flagship store in Moscow with Nazi graffiti. Defacing the boutique’s exterior with large decals that blend the fashion brand’s iconic logo with the face of Adolf Hitler. Similar displays showed up on Chanel shops in Paris.

Anton Gerashchenko, an adviser to the Ukrainian Interior Ministry, pointed out the bizarre hypocrisy of the protest: “The anonymous perpetrators decided to remind Chanel about the fashion house founder’s cooperation with the Nazis during World War Two. The Russians kept tactfully silent about the fact that, in the modern world, they are fascists.”