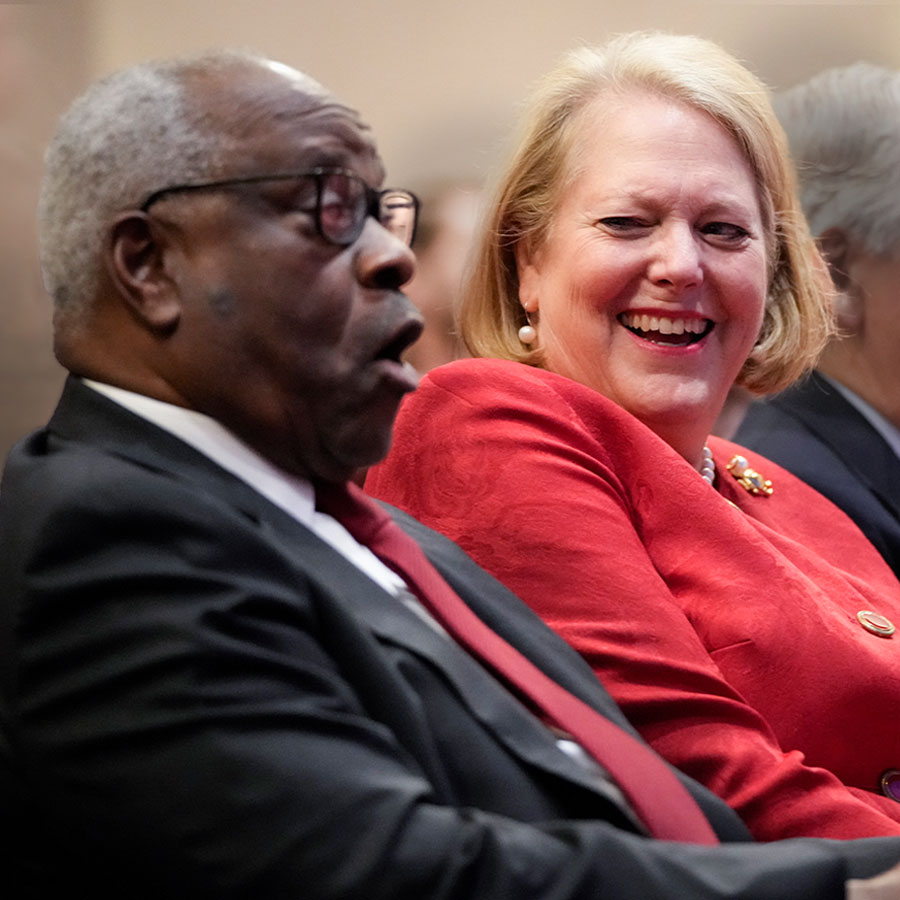 Associate Justice of the Supreme Court Clarence Thomas sits with his wife and conservative activist, Virginia "Ginni" Thomas, while he waits to speak at the Heritage Foundation in Washington D.C., in 2021. Photo: Drew Angerer/Getty Images

Keening for viral media clips to whip up their base in the run up to the 2022 midterms, Republicans belligerently assail a supremely qualified Ketanji Brown Jackson during televised hearings over her worthiness for the land’s highest court, falsely framing her legal opinions on abortion, war crimes and child pornography. In a lowlight of the spectacle, Ted Cruz harangued Jackson on her beliefs about “racist babies,” an assertion that only served to make unexpected bestsellers of the children’s storybooks he’d referenced as examples of his narrative. It’s something that might’ve irked the senator from book-banning Texas, but he was too busy checking social media to see how his “performative tantrum” had gone over with the base.

At the same time, the GOP completely ignored Justice Clarence Thomas’ blatantly unscrupulous efforts to bury White House communications that implicate his wife in an attempt to overturn an election that even respected conservative think tanks agree was “one of the most secure in history.” It’s a clear violation of the Constitution that Republican politicians must be well aware of as they make a pious — and well-publicized — point of not leaving home without pocket-sized copies of the Founding Father’s document tucked into their suit jackets.

A long-time, right-wing player in the Washington political scene, Ginni Thomas is revealed to be a conspiracy-sozzled loon who used her political access to encourage the overthrow of the 2020 election in a series of shouty crackers text messages; she issued a string of unhinged remarks (“This is a fight of good versus evil”; “The Left is attempting the greatest Heist of our History”; “We’re living through the end of America. The end of Liberty!”) to then-president Trump’s chief-of-staff, Mark Meadows. while assuring him that she was confabbing about it all with her “best friend” — a nickname she’s known to use for Clarence Thomas. All of which would have remained unknown, except for the SCOTUS-mandated unveiling of White House communications surrounding the capitol riot. A ruling for which Justice Thomas was the sole dissenting vote in an 8-1 decision that confounded everyone at the time. Hmmm.

The Ginni Thomas bombast was uncovered by no less than Pulitzer Prize-winning journalist Bob Woodward. “Here we have Ginni Thomas, not just being part of the pressure campaign,” an incredulous Woodward remarked on MSNBC’s Morning Joe, “but herself saying ‘Release the Kraken’ (an election fraud catchphrase used by the QAnon fringe). “Ginni Thomas is absolutely bonkers,” said David Corn of Mother Jones, putting it more succinctly. “Justice Clarence Thomas is literally in bed with a conspiracy theory nutter.”

Ginni Thomas, crusader for truth, demanded that Anita Hill apologize for the sexual harassment claims she made about her husband during his contentious 1991 Supreme Court confirmation hearings. She went so far as to call Hill at her Brandeis University office in 2010 — 19 years later! — to leave this bizarre recorded message: “Good morning, Anita Hill, it’s Ginni Thomas. I just wanted to reach across the airwaves and the years and ask you to consider something. I would love you to consider an apology sometime and some full explanation of why you did what you did with my husband. So, give it some thought. And certainly, pray about this and hope that one day you will help us understand why you did what you did. O.K., have a good day.” Professor Hill told the New York Times that she was not sorry. “She can’t ask for an apology without suggesting that I did something wrong — and that is offensive.”

Clarence Thomas, though, isn’t the last Republican Supreme Court nominee to face sexual misconduct allegations. Sexual assault allegations were also brought against Trump Supreme Court pick Brett Kavanaugh in 2018. The GOP, of course, rallied behind Kavanaugh and the spectre of that confirmation process looms large over that of Ketanji Brown Jackson. Senator Lindsey Graham even echoed the GOP cry that “this is not Kavanaugh” when referring to these confirmation hearings. And in a weird way, he’s right: Ketanji Brown Jackson is certainly not Brett Kavanaugh.

And then, just when you thought the whole situation couldn’t get any stranger, a video from 1989 that surfaced this week appears to show Ginni Thomas describing her experience in leaving the Lifespring cult, to which she once belonged.

Having just last year confirmed Ketanji Brown Jackson for a prestigious appellate court position, Senator Graham, amongst the most showboating congressmen at her hearing, announced with zero irony that he will oppose her Supreme Court nomination on the grounds that she’s an activist judge who ignores the law to achieve the outcomes she wants. The North Carolina Republican issued no comment on Clarence Thomas’ actions, while the GOP, en masse, rebuffed the idea that the judge should recuse himself from decisions involving the capitol insurrection and/or his wife.

“If your wife is a proud contributor to a coup, maybe you should weigh that in your ethical standards”  —House Speaker Nancy Pelosi on whether Clarence Thomas should resign over his wife’s behaviour and his dubious vote.