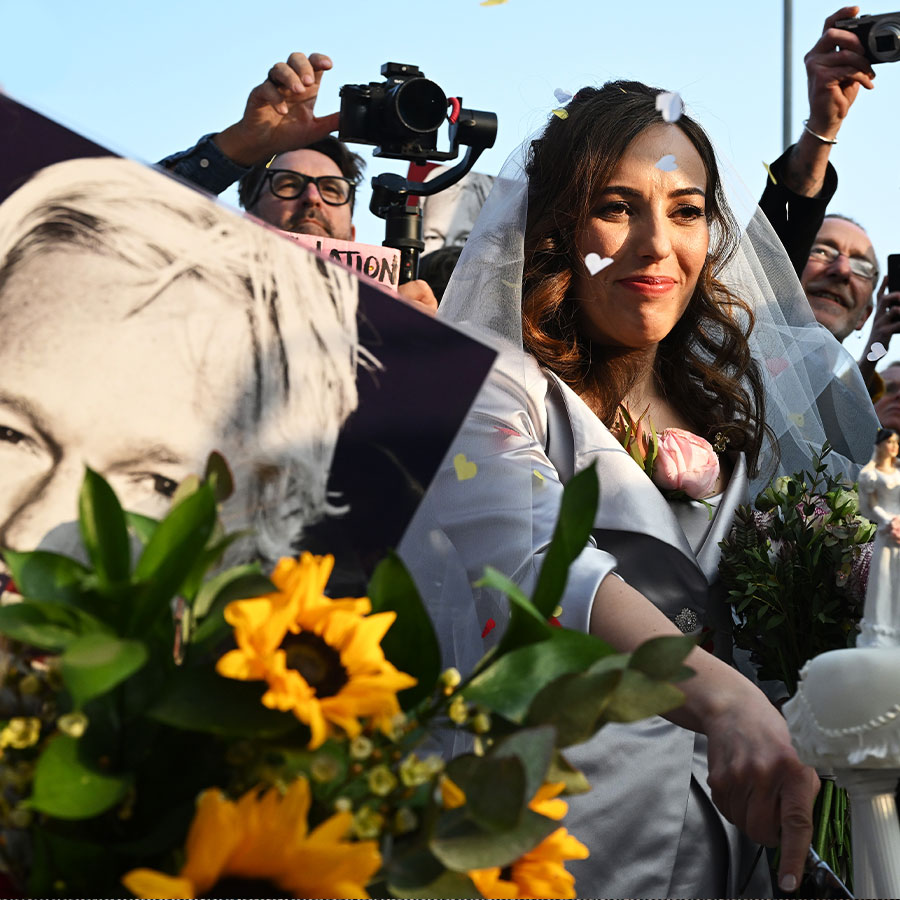 Stella Moris cuts a wedding cake given by supporters outside Belmarsh prison after marrying WikiLeaks founder Julian Assange on March 23, 2022 in London, England. The British Supreme Court recently denied an appeal in the case of Assange's extradition to the United States on espionage and hacking charges. Photo: Leon Neal/Getty Images

A member of Assange’s legal team, Stella Moris stunned the world in 2021 when she announced that she was also the mother of his two young children: boys, then four and two, that the pair had secretly conceived on “legal” visits at the Embassy of Ecuador in London where Assange was holed up for seven years claiming asylum. This week, having published a gushing love note/op-ed rant in The Guardian, Moris married her “true love” in the romantic environs of a maximum-security penitentiary.

While Assange’s revelations of government wrongdoing were once widely praised, the shine wore off his halo when he colluded with Trump henchman Roger Stone to release emails from Hillary Clinton’s 2016 presidential campaign that were stolen by Russian hackers. Either way, the Ecuadorians were more than happy to see the “ungrateful” Assange forcibly ejected — and immediately arrested — from their embassy in 2019, given that he’d repaid their years of hospitality by assaulting staff, skateboarding through the halls, being “insulting and rude,” smearing his feces on the walls, and just plain smelling really bad. Meanwhile, a besotted Moris gushed to the press that Assange was “unlike anyone I’ve ever met”. Which could only be true.

Jazzing up the bare-bones jailhouse nuptials, designer Vivienne Westwood, a staunch Assange advocate, was charged with wardrobe. She ran up a jaunty kilt for the groom and a lilac gown for Moris that’s full-length veil is embroidered with “valiant”, “relentless”, “free enduring love” and other tributes to their star-crossed ardour. “I love Julian with all my heart, and I wish he were here,” says the bride, wistfully cutting into a wedding cake outside the prison gates after the ceremony; a phalanx of global media captured her solo wedding photos.

Having driven the press wild with speculation over her series of 2017/2018 visits to the Ecuadorian embassy, carting in vegan meals and bags from Pret A Manger, Assange’s once-ardent defender Pam Anderson did not offer immediate comment on his wedding. Perhaps she’s too busy divorcing husband number four (or five … if we are, or aren’t, counting that 12 days with John Peters) while making her Broadway debut as Roxie Hart in Cabaret.

“Marriage is a wonderful institution, but who wants to live in an institution?”  — Groucho Marx