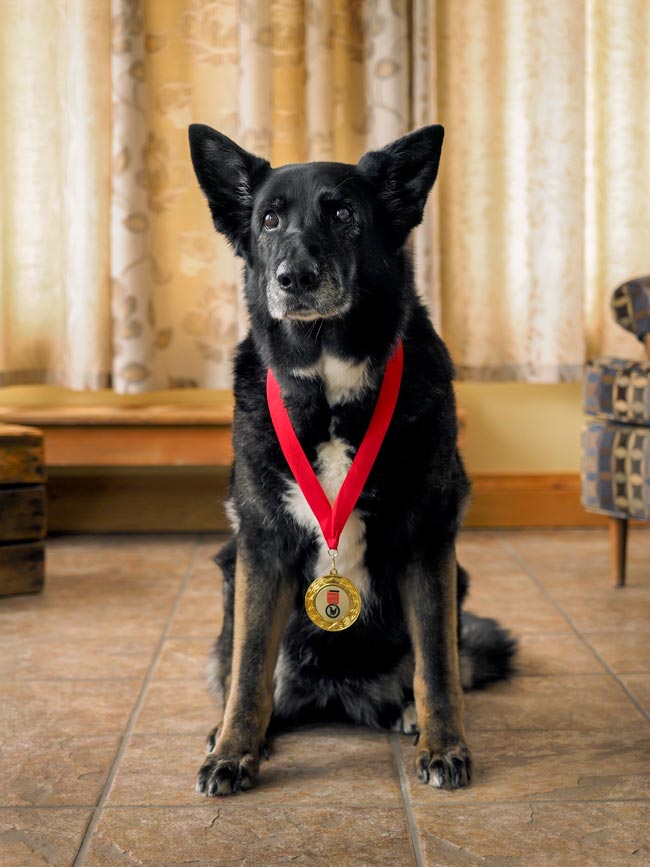 Three mutts who were once unwanted strays or abandoned were honoured this week (June 10) as heroes by Purina Canada.

They’re being awarded medals of honour and inducted into the Purina Animal Hall of Fame for exhibiting “extraordinary intelligence, loyalty and bravery to save the lives of those they love.”

“Dogs are acutely perceptive of human movement and will pay close attention to our body language.” says Ragen McGowan, research scientist in the Behaviour Group at Purina.

They will notice subtle changes in humans and adjust their own behaviour.”

One dog even risked her own life and was severely injured while protecting her human from a predator.

“Dogs that are closely bonded to their human companions will often sacrifice themselves to ensure the safety of that person,” explains McGowan. “They are naturally wired as social animals to go to great lengths to help those that are part of their social group.”

Shelby, a 13-year-old German Shepherd and Chesapeake Bay Retriever from Sault Ste. Marie. was adopted  by Louise Robillard and Andy Chyc because they needed a big dog to protect their house and 35-acre farm from foxes and coyotes.

On a day in April, 2018, when Louise and Shelby were walking along the trails on their property, they saw three black bear cubs and suddenly, the mother bear appeared and charged toward Louise. Shelby instantly ran between the bear and Louise and stood her ground. The bear slammed into Shelby, and both animals rolled around before disappearing into the bushes, still fighting. Louise could hear Shelby shrieking,

Back at home, Andy heard from a neighbour about a bear sighting in the area.  He went to warn Louise and found her safe. When the screaming stopped, they thought the bear had killed Shelby. But as they sadly started for home, Shelby emerged from the bushes, barely able to walk. They rushed her to the nearby Animal Hospital.

After several surgeries and physiotherapy, Shelby has recovered well and she’s officially relieved of her watchdog duties at the farm.

Louise knew from the time she adopted Shelby that she was a terrific watchdog but was stunned by her self-sacrifice.

“As soon as Shelby became a member of our family she immediately took to overseeing our little dogs and chickens,” she says. “She spent her days getting any coyote or fox to move back to the bush instead of coming to the house or chicken coop.  I always felt secure walking on our trails with Shelby.”

Louise says she adopted a rescue because. after working for the Humane Society in Muskoka many years ago, she realized that “too many wonderful dogs are never given a chance to find a home.  When we decided it was time to bring in a large dog to help protect the farm, we visited our local shelter.  We did have some behaviour issues with Shelby when she first arrived, but a bit of training got an excellent response.

Tucker, a 6-year old Shepherd and Rottweiler mix, adopted by Rachel Spiewak, woke his family in the Niagara-on-the-Lake  region by barking, pacing, whining, and pawing at the bed. After trying to ignore the dog, Spiewak’s  partner, Jason Chafe, got out of bed to see what was going on.

He opened the door of the room to a blazing wall of fire. The alarms hadn’t gone off because there was no smoke in the house — it had all bellowed directly outside.

The family, including Jason’s young son, the couple’s toddler and Tucker got out of the house safely and watched in horror as their home went up in flames.

Rosco, a big 3-year old mixed breed Shepherd was one of eight puppies born to a stray who lived under the steps of a Calgary fire station.  Brittany Ouellette brought him home to join her family, including her father, Bryan.

On a morning when the family went on a day trip, Bryan stayed home because he wasn’t feeling well. Rosco stayed to keep him company.

When Bryan tried to get out of bed and couldn’t because his left side was numb, he realized he was having a stroke. He tried rolling out of bed but fell to the floor. In desperation, he tapped on the floor with his right foot to get Rosco’s attention.

When the dog came to him, Bryan grabbed hold of his collar and allowed Rosco to swing him around to reach the phone. Then, Rosco gently pulled Bryan to the door to meet the paramedics.

Bryan was rushed to surgery and made a terrific recovery.

“Dogs notice changes, even subtle ones, in body posture or tone of voice,” explains Purina’s animal behaviour expert McGowan. “They interpret your emotional state and what’s going on with you and recognize if you’re in a panic situation.”

She adds, “The majority of people underestimate dogs and what they’re capable of. They’re highly intelligent problem solvers and can work out difficult things.” She suggests giving pet dogs lots of stimulation and even devising cognitive games, like hiding treats.

The Day My Dog Saved My Life