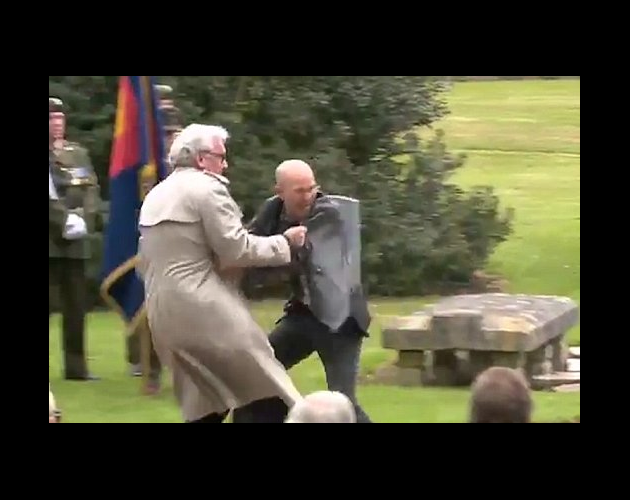 Ken Vickers, the 59-year-old former sergeant-at-arms in the House of Commons, has done it again—this time in Ireland.

He’s being cited as a hero for tackling and bringing down a protestor at a memorial service for British soldiers who died during the 1916 Easter uprising in Ireland, where Vickers now serves as Canadian ambassador.

In 2013, Vickers, a former Mountie, shot gunman Michael Zehaf-Bibeau inside the House while Parliament was sitting.

A year later, Vickers was appointed as Ambassador to Ireland.

Today, declared the Daily Mail, he “provided another display of extraordinary courage by wrestling with a protester at a military ceremony in Ireland. ”

Vickers was attending the ceremony as Canada’s ambassador.

A man in his 40s, wearing an Easter Rising T-shirt, stood up during the invitation-only event, yelling, “This is an insult.”

Vickers was the first to respond to the disturbance, tackling the man and leading him away from the ceremony, reported the Irish Independent. Police later arrested the protester.

“This man just ran forward and started screaming, ‘It’s a disgrace.’ He was tackled by somebody and it was only after that I realized it was the Canadian ambassador,” a bystander told the Irish paper.

But not everybody thinks Vickers is a hero for tackling the protestor, or that he was right to do it.

“Diplomacy, it would appear, is not his strong point. This is problematic, due to the fact that he is a DIPLOMAT. Some people may find it hilarious but he is acting like a thug.”

Another wrote: “So basically he has assaulted a protester? Is protesting illegal in Canada?”

However, the great majority of comments are wildly enthusiastic about Vickers and how he steps up to the plate time after time.

One commenter suggests he’d make a great Minister of Defense.

“Love it. Ambassador pushing 60 takes on weedy 40 yr old protestor. This is the role of the S At Arms and he doesn’t shy from getting stuck in. ”