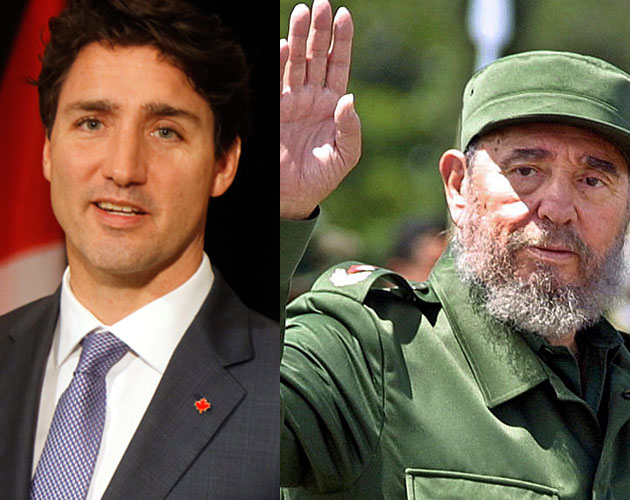 It’s a no-win situation for the prime minister, and perhaps just a preview of the tricky balance that’s coming his way when Donald Trump takes office next month.

“Should I stay or should I go?”

Not only a hit song by The Clash, it’s also the dilemma Justin Trudeau faced after Fidel Castro’s death on Nov. 25.

And “the clash” is certainly what his predicament is all about—the clash between the political left that’s still celebrating Fidel for his revolution and the political right that abhors the tyrannical communism he imposed on his people.

The body isn’t even buried and the Prime Minister is already dealing with the backlash to the backlash against his attending the funeral.

It takes place Sunday, December 4, after a four-day funeral procession through the island.

Trudeau’s first inclination likely was to attend, and that’s understandable. His family has had a long and warm association with El Commandante who came to Canada for Pierre Trudeau’s funeral and served as an honourary pallbearer.

Cuba is one of the most popular vacation spots for Canadians and there never were any restrictions or friction between the two countries in trade and travel.

Sure, we didn’t approve of the way political prisoners were treated or the disregard of human rights or the dictatorship instead of democracy but that didn’t stop us from piling on to flights every winter to a warm Cuban beach.

In view of the close connections between Canada and Cuba, between the Trudeaus and Castro, it wasn’t surprising that the Prime Minister was willing to head south this week.

But he was soundly scolded (and mocked) by the Tories, Cuban-Americans and others for his kind words about Castro, and for not even mentioning that he was also a dictator.

So he backed off, joining other world leaders, including the Britain’s Elizabeth May, President Barack Obama, Russia’s Vladimir Putin and France’s Francois Hollande, in declining to attend. Lower ranking representatives, including our Governor-General, will attend instead and this can be rationalized because Fidel was not a head of state when he died.

But Trudeau’s skipping the funeral has brought its own backlash from the left.

The national affairs columnist called Trudeau’s backing down “misguided and disappointing…because the prime minister is relinquishing a chance to underscore Canada’s unique relationship with the Cuba that Castro’s 1959 revolution created.”

He continued, “It is disappointing because Trudeau has allowed himself to be browbeaten by the usual suspects—anti-Communists posing as human rights warriors who can find no good in modern Cuba.”

Walkom defended the unique and long-standing relationship between Canada and Cuba, insisting it was reason enough for Trudeau to make the trip.

“The trade and investment embargo the U.S. placed on Cuba after the revolution was a blatant and savage attempt at regime change. Canada understood that too and chose not participate. Instead, it supported Canadian companies that invested in Cuba and Canadian tourists who flocked there.”

Truly, it was a no-win situation for the prime minister, and perhaps just a preview of the tricky balance that’s coming his way when Donald Trump takes office next month.

In the meantime, maybe he should look for inspiration and advice to that wiliest of political savants, William Shakespeare.

What Trudeau could have said is: “I come to bury Castro, not to praise him.”