The Latest Dispatches From The Female Frontline 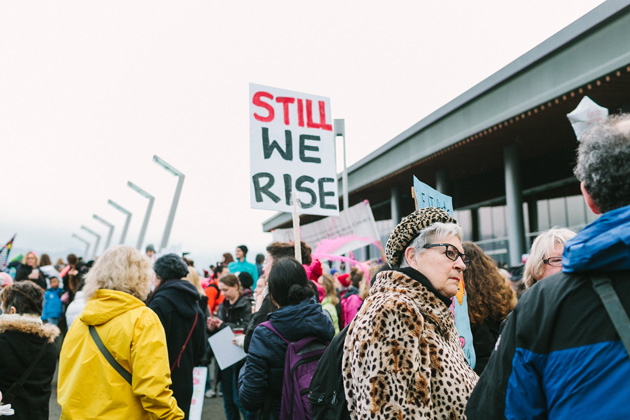 It’s time again for the International Women’s Day dance—two steps forward in sensible flat shoes and one step back in stilletos.

This week, the British Parliament—that esteemed institution that abolished slavery and passed the Habeas Corpus Act—made another grand gesture for the ages: upholding the right of women to work in flats and not be required to wear heels on the job.

And yet, at the same time, a female English journalist wrote about how much she loved wearing stilletos, how attractive they made her feel and look.

Also, while other urgent issues were being debated in Britain this week, such as whether another vote on Brexit was appropriate, it was the appropriateness of actress Emma Watson partially exposing her breasts in Vogue magazine that was the subject of much vigorous debate—specifically, whether one could bare her pair and still be a feminist.

That led to a prickly discussion about “good feminists” and “bad feminists.”

There’s still so much confusion about what women want—and how they want to be and be seen in the world—especially among women themselves.

But the saddest story from England was about highly successful children’s author Helen Bailey. After her husband died, she joined a Facebook group for bereaved spouses and there met a man who wooed and charmed her. They moved in together in an impressive country house and she changed her will to leave her millions to the man she described as a “gorgeous white-haired widower.” (He’s actually kind of repulsive.) They were together for four years and planning a wedding; well, she was, anyhow. Then she disappeared.

After months of fake mourning, Mr. Not-So-Gorgeous was arrested because his lover’s body was found in the cesspool beneath the garage. He was recently convicted of drugging her for weeks and then tossing her body into the septic tank.

Are you thinking, at least for a fleeting moment, that not only was he a monster but also that she was foolish? When women are victims, we still tend to blame them. And if they survive, they tend to blame themselves.

I’ve been dwelling on what’s been happening on the female frontline in Britain just now because, here in Canada, we’re doing pretty well.

Prime Minister Justin Trudeau has been adored by women all over the world as much for making his cabinet half female as for his handsome features and toned torso. (But just imagine if we had a female prime minister and the world was going ga-ga about her appearance!)

Nevertheless, Canada’s reputation as one of the best nations for women takes a huge hit because of what’s happened to aboriginal women. The long overdue National Inquiry into Missing and Murdered Indigenous Women and Girls is currently active, with a report scheduled for November.

But even in Canada, women make less money and because we live longer, we’re more likely to struggle with finances.

Meanwhile, the other country we’re closest to is a total lost cause this International Women’s Day. Talk about two—or 200—steps back!

The Pussy-Grabber-in-Chief presides over the nation, Planned Parenthood will be defunded (unless they stop counselling about abortion), abortion may be outlawed altogether if the people holding power have their way, women are vastly unrepresented in Trump’s cabinet, powerful and emboldened women (Hillary Clinton, Elizabeth Warren, Kellyanne Conway) are silenced, belittled and insulted and feminism in general is regarded the way guns ought to be.

And Americans don’t even officially recognize International Women’s Day (it has yet to pass through Congress).

So here’s what women really want: