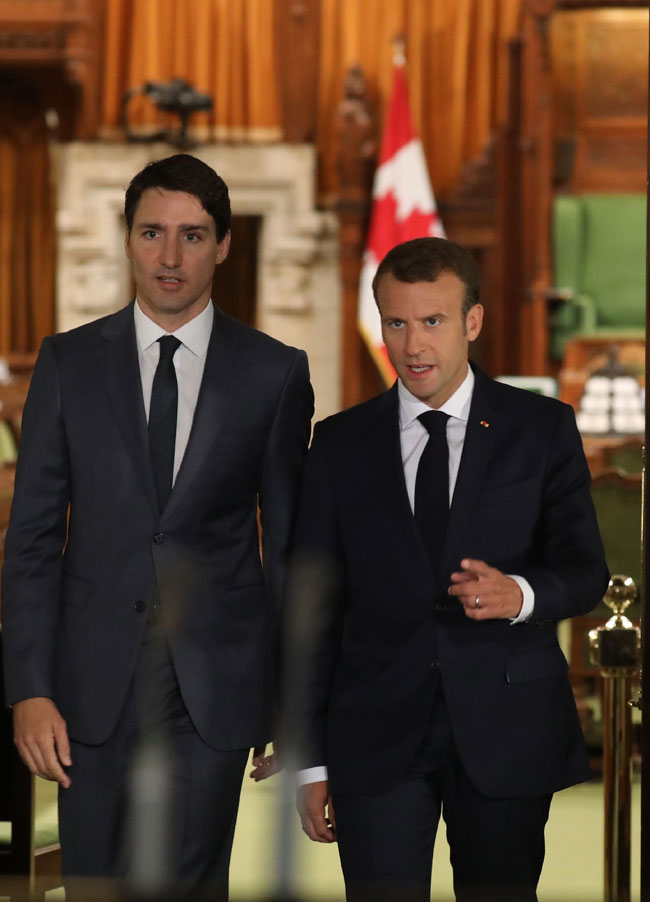 Prime Minister Justin Trudeau and French President Emmanuel Macron met before this weekend's G7 summit to discuss strategy on how to force U.S. President Donald Trump to back down on his controversial steel tariffs. (LUDOVIC MARIN/AFP/Getty Images)

The most powerful world leaders have begun gathering in Charlevoix, Que. for the G7 Summit, an annual confab that will try to resolve the most pressing issues of the day – spurring economic growth, creating jobs, ensuring gender equality, addressing climate change and bringing about world peace.

That’s the official lineup, anyway. But all anyone is talking about is Donald Trump and how his tariffs on steel and aluminum will wreak havoc on some of the biggest global economies.

Although it’s not listed on the G7 agenda (which takes place June 8 and 9), the only item that really matters is how can Canada, Germany, France, the U.K., Italy, and Japan convince the maverick in charge of the world’s biggest economy to back down on his economically damaging trade policies.

That might be more difficult to achieve than all the other agenda items added together.

Because President Trump is not one to back down.

True to form, the black-hatted President comes galloping into town with guns blazing. Before even landing in Quebec, he tweeted that he was: “Getting ready to go to the G-7 in Canada to fight for our country on Trade (we have the worst trade deals ever made).” and “When you’re almost 800 Billion Dollars a year down on Trade, you can’t lose a Trade War! The U.S. has been ripped off by other countries for years on Trade, time to get smart!”

When the President does arrive, he’ll face a group of world leaders bent on ending economic hostilities between these close allies.

“We can’t engage in a trade war against friends,” said French President Emmanuel Macron, who is visiting Canada to discuss a Trump strategy with Prime Minister Justin Trudeau. “A trade war doesn’t spare anyone.”

In a joint press conference with Trudeau, Macron urged a civil approach when dealing with the bellicose U.S. President.

Trudeau, however, seems loaded for bear. “We are going to defend our industries and our workers,” Trudeau told reporters, and “show the U.S. President that his unacceptable actions are hurting his own citizens. American jobs are on the line because of his actions.”

Just how they aim to convince the bellicose Trump to back down – or even compromise – his tariff policies is anyone’s guess.

Larry Kudlow, Trump’s top economic advisor, struck an optimistic note by comparing the trade war to a household dispute. “Look, we are talking everything through. There may be disagreements. I regard this as much like a family quarrel. I am always the optimist and believe it can be worked out. I’m always hopeful.” Kudlow said in a press conference before the G7 Summit.

He did, however, go on to add that the U.S. is trying to fix the world trading system and “will do whatever is necessary to protect the United States, its businesses and its workforce. Tariffs are a tool in that effort and people should recognize how serious he is.”

Trump and Trudeau will sit down at the G7 Summit to have a bilateral meeting. Kudlow said the bilateral meeting was, according to Kudlow, “a really good thing” which would allow the two leaders to “walk through a lot of these issues.”

Kudlow also expressed confidence that the U.S. and Canada would remain “firm friends and allies.”

We’ll see how friendly relations are after the G7 Summit concludes.