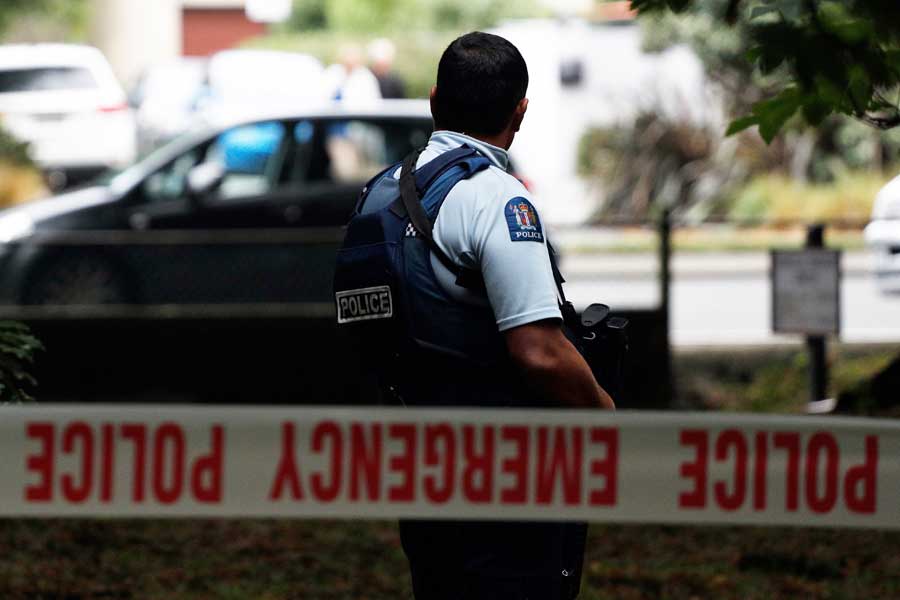 A police officer secures the area in front of the Masjid al Noor mosque after a shooting incident in Christchurch on March 15, 2019. - Attacks on two Christchurch mosques left at least 49 dead on March 15. (Photo: Tessa Burrows/AFP/Getty Images) Police say they have apprehended two suspects who they believe were behind the deadliest mass shooting in the small, peaceful country’s history.

At 1 p.m. on Friday, police were called to locations, in Christchurch and in Dunedin, after the mosque shootings began filtering out. The first took place at the Masjid Al-Noor mosque, where over 40 people were killed, and the second at Linwood Masjid Mosque, where seven were slain. Police also found a car with two explosive devices, which were subsequently disarmed.

According to media reports, the man behind the killings is 28-year-old Brenton Tarrant, a personal trainer from New South Wales, Australia. In an especially horrifying move, the gunman livestreamed his terror attack, showing himself loading his assault rifle, driving to the mosque, entering the building and then calmly spraying the congregation with bullets.

And on one of his social media postings leading up to the attack, Tarrant reportedly posted a picture of his ammunition cache, on which he had chalked the name of Alexandre Bissonnette, as if to honour the Canadian who shot up a Quebec City mosque in 2017, killing six.

Tarrant also posted a racist manifesto explaining his actions. Before the account was removed, the Daily Mail ran screen grabs in which Tarrant described U.S. President Donald Trump as arrant and said that he supported him as a “symbol of renewed white identity and common purpose.”

Ardern and police are asking those who may have downloaded the video not to distribute it. “We should not be perpetuating, sharing, giving any oxygen to this act of violence and the message that’s set behind it,” she said.

According to early news reports, these included lengthy, anti-Muslim, anti-immigration rants, saying he wanted, “To take revenge on the invaders for the hundreds of thousands of deaths caused by foreign invaders in European lands throughout history.” He also described himself as, “a regular white man, from a regular family … who decided to take a stand to ensure a future for my people.”

According to the Guardian, New Zealand gun laws do not ban the ownership of semi-automatic military-style assault weapons.”

Saying that “attacking people during prayers is absolutely appalling,” Canadian Prime Minister Justin Trudeau condemned the shooting, adding that “we  join New Zealanders and Muslim communities around the world in grieving.”