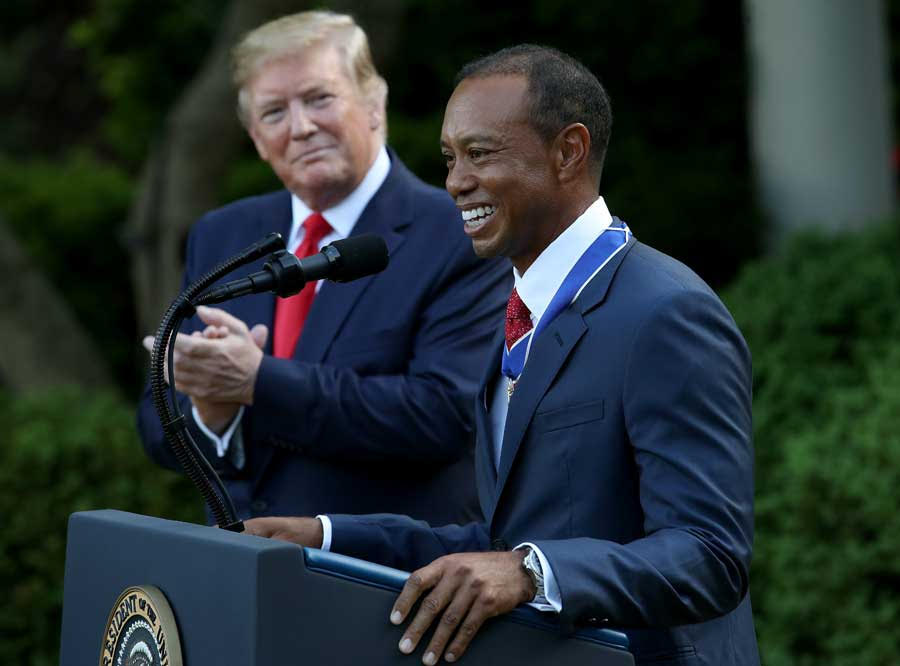 In a ceremony held today in the White House’s Rose Garden, President Donald Trump presented 43-year-old Tiger Woods with the Presidential Medal of Freedom, the highest civilian award in the U.S.

Calling Woods “an extraordinary athlete who has transformed golf and achieved new levels of dominance,” the President rhymed off Tiger’s incredible performances on the golf course, saying it was all due to his “relentless will to win, win, win.”

Trump noted that when Tiger, a long-time friend, business associate and golfing partner, burst on the scene at the age of 21 and won the Masters by a record 12 strokes, “he forever changed the game” by becoming the first person of African or Asian heritage to win one of golf’s majors.

“He is a true legend, an extraordinary athlete who has transformed golf and achieved new levels of dominance,” said Trump. “Tiger gave us moments that will live forever in sporting lore.”

Trump, of course, is a well-known golf enthusiast who has also been accused of being a chronic cheater on the course and lying about his handicap. (A recent book called Commander in Cheat suggests that Trump’s lack of attention to the rules of golf helps explain his actions as President).

Besides honouring Tiger’s fantastic career, culminating in his superb victory at this year’s Masters, Trump hailed Woods as a “great person” whose amazing return to the victory podium after multiple back surgeries almost ended his career, makes him a “global symbol of American excellence, devotion and drive.”

An emotional Tiger accepted the award, thanking his mother and (deceased) father as well as his girlfriend Erica Herman and children Sam and Charlie. He expressed his appreciation for their standing by his side during his physical and personal struggles (including a much publicized cheating scandal in 2009) — “you’ve seen the good and the bad. The highs and the lows.”

And he burst out smiling when he referred to his victory at Augusta, which proved he had overcome these lows and had successfully fought his way all the way back to the top.

“The amazing Masters’ experience I had a few weeks ago is part of the highlight of what I’ve accomplished so far in my life,” he said.

Tiger is the 33rd athlete to win the Presidential Medal of Freedom, which is presented to individuals who have made outstanding contributions to American life, history and culture. He joins Arnold Palmer, Jack Nicklaus and Charlie Sifford (the first African-American golfer to join the PGA tour) as the only other golfers to win the award.