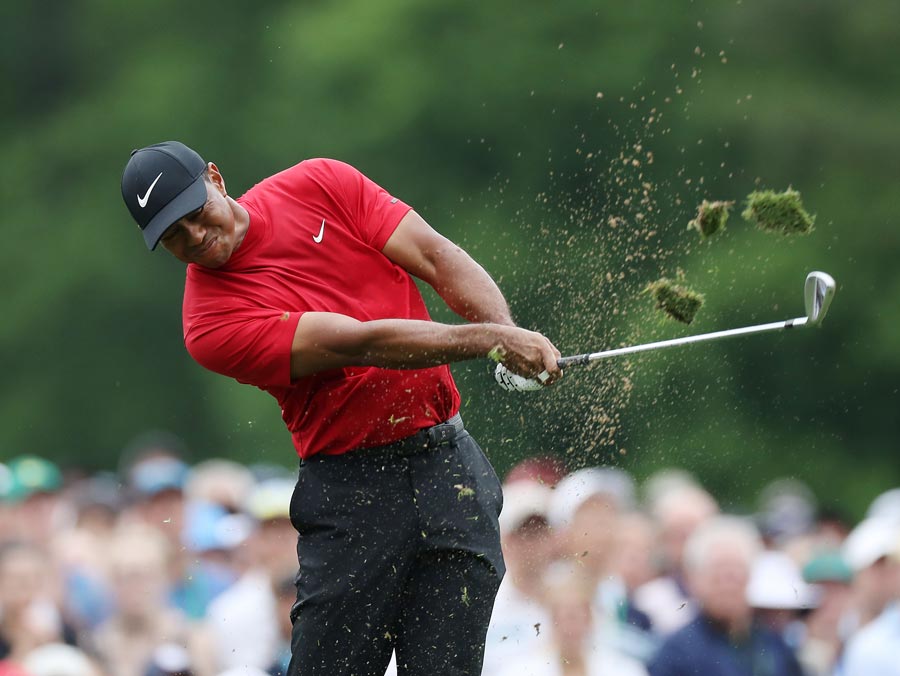 Tiger Woods of the United States plays a shot from the 12th tee during the final round of the Masters at Augusta National Golf Club on April 14, 2019 in Augusta, Georgia. (Photo by David Cannon/Getty Images)

You didn’t have to be a big fan of golf to be transfixed by Tiger Woods’ improbable triumph at the Masters.

You didn’t even have to be a fellow bad back sufferer to thrill at how he wielded that stick, twisting and turning and powering the ball down the fairway.

But I am — a fellow bad back sufferer, that is.

I watched the Masters from my almost permanent prone position these days, on the couch, heat or ice alternately minimally soothing the misery lurking at my L4 and L5 lumbar spine vertebrae.

Almost a month ago, I crept into Emerge as the Hunchback of Notre Dame.

Well, we don’t have a clean stretcher right now.”

“Then I’ll lay down on the floor.”

Because the optics of an elderly patient writhing on floor would not look good, they promptly found a reclining chair and when it went all the way back, I found some relief.

A CT scan revealed all sorts of dire things happening behind my back, mainly discs rearranging themselves and nerves, including the sciatica stretching down to my big toe, screaming. “Nooooo.”

I was sent home with a plethora of prescriptions and a promise of a follow up appointment with a spine specialist, a likely visit to the Pain Clinic for a steroid jab at the offending parts and, if that didn’t work, surgery.

Here’s the problem: the only two people I know who have had back surgery recently ended up with life-threatening infections.

My future did not look bright, even though my present was dull with pain and drugs.

And then came the Masters.

But I didn’t know a lot about his back problems, probably because they weren’t as interesting as his sex life.

But when I realized how bonded we were because of our spinal suffering, I started searching for everything I could find out about Tiger Woods’ back.

“The low periods were for a better part of four to six months that I had to be helped out of bed every day,” Woods told a reporter. “And there were some days, even where you’d help me, I couldn’t stand up. I’d have to either just fall to the floor or just stay in bed.”

“Coming back and playing golf was never in my thoughts,” Woods said, at the time.

Fortunately, I never got busted for driving under the influence like Tiger did, even though we were on similar meds including Dilaudid, an opioid narcotic. That’s probably because I couldn’t make it to the garage, and besides, my partner hid the keys.

Finally, after some rehab, the former golfer — for that’s what he was in 2014 — had his first back surgery. It was a minimally invasive microdiscectomy; removing a small piece of disc that’s pressing on the nerve.

He had three more of those but the pain persisted.

“I could no longer live with the pain I had. We tried every possible non-surgical route, and nothing worked,” he wrote in a blog post in May 2017. “I had good days and bad days, but the pain was usually there, and I couldn’t do much. Even laying down hurt. I had nerve pain with anything I did and was at the end of my rope.”

Two years ago, in April 2017, he had a fourth surgery on his back (he’s also had three knee surgeries). This most recent back operation was a major one, a spinal fusion or “anterior lumbar interbody fusion.” It’s considered somewhat risky and doesn’t also work to alleviate the pain.

Nevertheless, after the surgery, he said he felt “instant nerve relief. It’s hard to express how much better I feel. I haven’t felt this good in years.”

He hadn’t golfed that good in years either, kicking off his stunning comeback last year.

“Tiger Woods shocked the world with his comeback on the PGA Tour in 2018,” reported Golf Magazine.  And now, the win at Augusta.

If, like me, you’re one of the four out of five Canadian adults who experience at least one episode of back pain at some time in their lives, if you’re tormented with a disc that’s slipped or herniated or popped out of place or bulges into the spinal cord or has otherwise gone feral, you’re likely getting an extra thrill from Tiger Woods’ overcoming his back problems.

I figure if he can come back to win the Masters, I should be able to make a comeback, too, and walk the dog all the way to the dog park — and back.