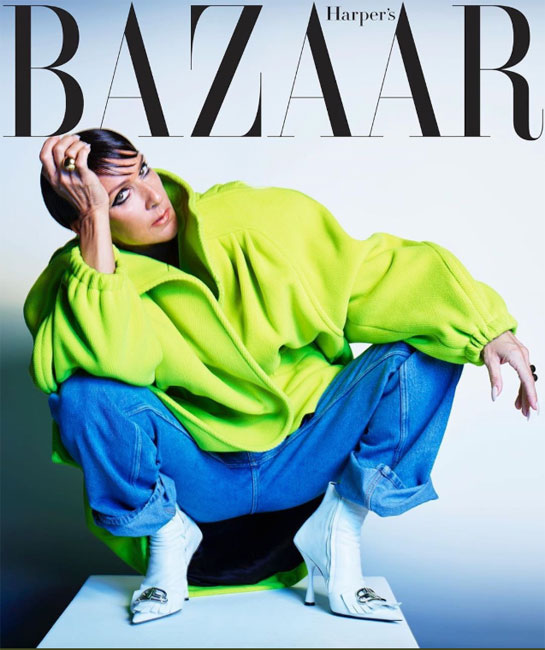 Continuing her reign as a fashion queen, Celine Dion sports a bold new look on the covers of the September issue of the American and British editions of Harper’s Bazaar. The coveted September US edition is labelled the Icons Issue and profiles other stylish luminaries including Kate Moss, Christy Turlington, Alicia Keys and more.

But what really sets the 51-year-old Canadian musical superstar apart from the others featured in the issue is a sharp new look. Hairstylist Akki Shirakawa, who worked on many of Lady Gaga’s hair looks, gives Dion a sleek black bowl-cut wig. The sharp edged wig is reminiscent of the 1960s model, Peggy Moffitt. The famed five point hair cut from Vidal Sassoon — along with her heavy black kohl rimmed eyes — helped Moffitt gain iconic status. The fashion shoot captures Dion’s eerily similar look to the mod model from a half century ago.

But Dion is no stranger to edgy fashion looks. Outfitted in ultra-glam looks, she has become a front row fixture during couture week in Paris and has become a daring darling of style within the fashion industry. This past spring has seen her on many of the covers of the international editions of Elle magazine — including the Canadian version.

Her latest fashion photo shoot in the Harper’s Bazaar feature is styled by the magazine’s Global Fashion Director, Carine Roitfeld. The Icons Issue celebrates “actors, models and musicians (who) have shifted perceptions by resisting the established, avoiding the accepted and breaking every rule they can.”

It’s certainly describes Dion’s show business career. This year the music legend has finally ended her 16 year Las Vegas residency at Caesars Palace and will begin a new world tour this fall. And with several bio pics in the works, expect to see more Dion — in the worlds of fashion and beyond.