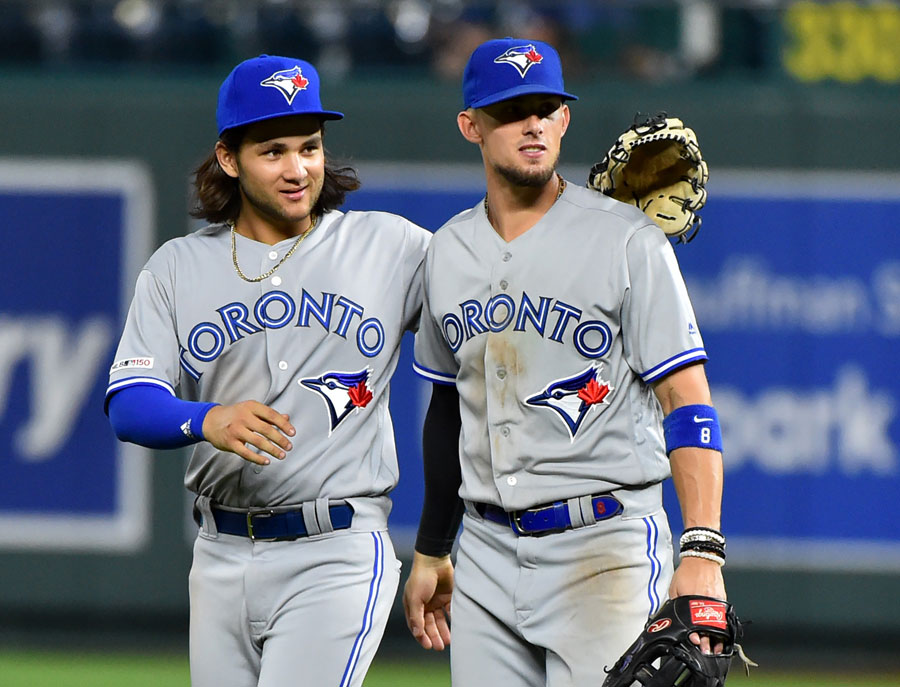 In a baseball season filled with depressingly lopsided losses and the departure of familiar faces, the only solace for Toronto Blue Jays fans is to watch the development of three future stars — Vladdy Guerrero Jr., Cavan Biggio and Bo Bichette.

After spending half the year in the minors, Bichette is the latest Blue Jay rookie to burst onto the scene. He’s absolutely raking right now, hitting the ball all over the park and putting up numbers no one has ever seen before.

In his first 53 plate appearances for the Jays (including last night’s 12-6 loss to the New York Yankees), Bichette is batting .408 with 4 homers and a stunning 13 extra-base hits. That torrid start includes hitting a double in nine straight games, which has never been done before in Major league Baseball. He set the record last night, demolishing a record previously held by Ted Williams, regarded as the greatest hitter in modern baseball history.

Bichette’s breathtaking start obviously won’t continue, as pitchers figure out what pitches not to throw him. But that doesn’t mean fans shouldn’t enjoy it while it lasts.

And while everyone’s talking about Bichette’s hot streak, we shouldn’t overlook the rapid development of two other players who have risen through the farm system together: 20-year-old Vladdy Jr. (13 homers, .800 SLG) and 24-year old Biggio (10 homers, 42 BB).

Besides their offensive production, each  of these three whiz kids brings a fun-to-watch swagger to the game. And unlike typical rookies, none of them seem overmatched at the plate or caught up in the moment.

They exude a confidence that borders — but never crosses over into — blatant cockiness. It’s an exceedingly fine line in baseball — cocky players, those who toss their bats and stand watching their homers too long, will eventually get thrown at by pitchers. The difference with these three is that they don’t want to show up the opposition pitchers — they’re just a bunch of kids out there having fun.

Their uncanny understanding of baseball’s rigid (and often perplexing) code may be due to the fact that all three kids are sons of major league players. Vladimir Guerrero Sr. and Craig Biggio are both Hall-of-Famers and Bichette’s father, Dante, played 14 years in the majors. Their sons grew up in locker rooms around big-league stars.

In the parlance of baseball, they “respect the game” — meaning, they know how it works and what it takes to succeed.

Bichette’s father, Dante, explained to reporters the benefits of growing up in this environment: “Being in the clubhouse as much as he was, he got to know the guys really well and saw the work ethic and the preparation, and it was much different than he thought,” dad said. “It changed his outlook on the game.”

Learning baseball’s tough lessons obviously help when you have a father who played the game. As Bichette said after yesterday’s game: “Growing up, my dad always told me to swing hard, to run hard, to throw hard. Every time you take BP (Batting Practice), hit the ball as far as you can. Whenever we throw, throw as hard as you can. It just goes on and on. For me, it’s just kind of second nature.”

Cavan Biggio agrees with this assessment, saying that growing up around his dad in the clubhouse gave him “a little head-start on understanding some of the day-to-day work that goes into being a pro ballplayer.”

And whil Vladdy Jr., who has a bit more of a complicated relationship with his father, doesn’t speak much of his time growing up, former Blue Jay GM Alex Anthopoulos said in this excellent Sportsnet profile: “[Vladdy Jr.] idolizes his dad. He was so proud to show me some of the highlights — the defensive plays, the hits. You could tell he really wanted to emulate everything his dad did.”

Forget About Winning, For Toronto Blue Jay Fans 2019 Is All About Vladdy Jr.